As Barack Obama begins his second term in office, the public is hearing a mix of good and bad news about the economy, as it has for much of the past four years. Views of news about real estate values and financial markets have improved and are as positive as they have been in the last four years. But these relative bright spots are counterbalanced by persistently negative views of news about gas prices and prices for food and consumer goods.

For the first time, as many say they are hearing mostly good news (25%) as bad news (24%) about real estate values; the remainder (40%) says the news is mixed. In 2009, far more saw the news about real estate as bad than good and the balance worsened considerably in 2010 and 2011.
The latest survey by the Pew Research Center, conducted Jan. 31-Feb. 3 among 1,000 adults, finds that perceptions of news about financial markets have become more positive since the end of last year. Nonetheless, more say the news about the financial markets is mostly bad (28%) than mostly good (18%); 44% say the news is a mix of good and bad. The job situation also is viewed less negatively: 42% say the news about jobs is mostly bad, the lowest percentage in nearly a year and far lower than the 71% who viewed job news negatively in June 2009.

By contrast, views of news about prices for food and consumer goods remain broadly negative and have shown no improvement over Obama’s first term. Half (50%) say they are hearing mostly bad news about consumer prices; just 7% say they are hearing mostly good news. In June 2009, shortly after Obama took office, impressions of news about prices were less negative (39% mostly bad news vs. 9% mostly good news).

There have been wide swings in perceptions of news about gas prices – and other economic sectors – over the past four years. For instance, over a four-month period last year, between March and July, the percentage viewing news about gas prices as mostly bad fell 54 points, from 85% to 31%.

Opinions about job news improved both last spring and the year before, but subsequently declined. In March 2012, for instance, 38% said job news was mostly bad. In June, that figure rose to 55%, before declining in the fall. Currently, 42% say job news is mostly bad, 12% say it is mostly good, while 43% see it as mixed. 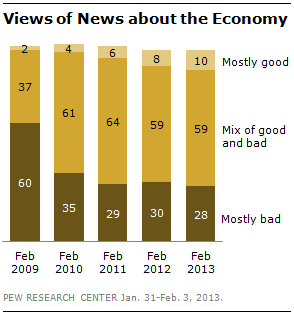 That is little changed since January, though views of economic news are somewhat more 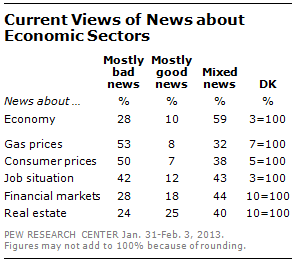 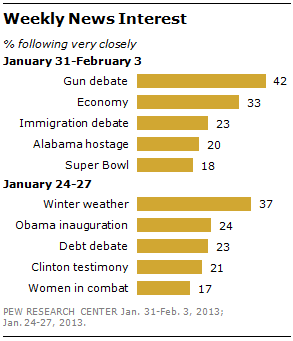 In the previous week’s survey (conducted Jan. 24-27), cold winter weather topped the public’s news agenda: 37% followed news about winter weather very closely, compared with far fewer who followed Obama’s inauguration (24%) or discussions over the federal budget deficit and national debt (23%). Democrats were much more likely to follow Obama’s inauguration very closely (41%) than were Republicans (12%). Partisans were equally likely to follow news about Hillary Clinton testifying about the attack on the U.S. embassy in Benghazi, Libya.