When President Obama goes before a joint session of Congress on Thursday to lay out a plan for spurring jobs creation, one of the political and policy dynamics at work will be the tension that animated the debate in Washington all this year: the push to reduce federal spending and the government’s deficit competing against whether some kind of stimulus is needed to deal with a faltering recovery and the stubbornly-high unemployment rate.

While Republicans, and particularly the new Tea Party lawmakers who joined them on Capitol Hill this year, spearheaded the drive to put deficit reduction front and center, the issue had risen at least modestly in the list of public concerns. A January survey by the Pew Research Center for the People & the Press showed a gradual rise in public concern about the deficit with 64% citing it as a top policy priority for 2011, compared with 60% the previous year and 53% in January 2009. 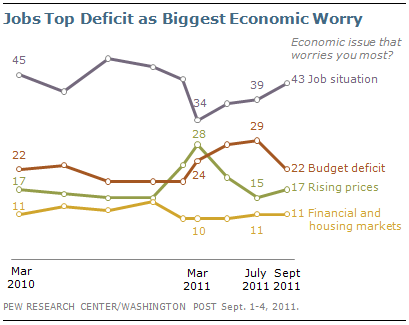 resulting from the fragile recovery and the failure of the jobs market to improve.

A Pew Research Center/Washington Post poll conducted Sept. 1-4 shows a steady rise since March – from 34% to 43% – in the percentage of those saying that the job situation is the economic issue that worries them most. Those citing the budget deficit as their top worry declined from 28% in May and 29% in July to 22% in September. 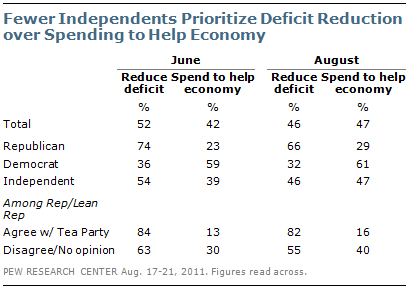 A mid-August poll by the Pew Research Center for the People & the Press found a similar trend on a somewhat different measure.

In June, 52% had said the higher priority for government should be reducing the deficit, compared with 42% who favored spending to help the economy recovery. But the August poll showed the public almost evenly divided over whether the higher priority should be spending to help the economy recover (47%) or reducing the budget deficit (46%).

Those results showed the same sharp partisan split that characterized the budget battles throughout the year. Republicans favored deficit reduction over spending to help the economy by 66% to 29% and GOP Tea Party adherents held that view even more strongly, 82% to 16%. Democrats favored stimulus over spending reduction by 61% to 32%. 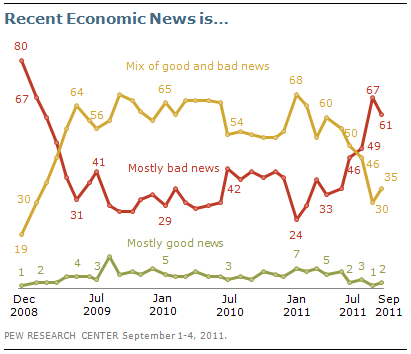 The recent shifts in public opinion on the importance of deficit reduction come in the context of the bad economic news that is saturating Americans at the moment. The News Interest Index conducted Sept. 1-4 by the Pew Research Center for the People & the Press found that 61% of those surveyed said they were hearing “mostly bad” news about the economy.

That number was down slightly from August, but was up nearly 40 points since the beginning of 2011. As has been the case for nearly three years, very few Americans, just 2%, said the news they were hearing about the economy was mostly good.