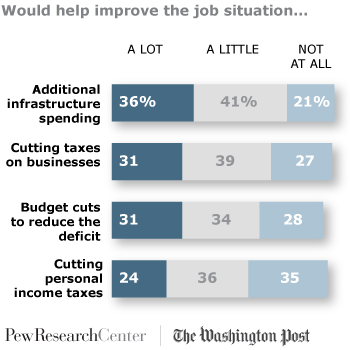 When asked which economic issue worries them most, nearly twice as many Americans cite the job situation as the federal budget deficit (43% to 22%). There is less clarity in the public’s views about ideas to address the job situation – many are seen as helping at least a little, but no specific proposal emerges as a silver bullet.

The latest survey by the Pew Research Center for the People & the Press and The Washington Post, conducted September 1-4, 2011 among 1,001 adults, finds that large majorities say additional spending on infrastructure, cutting the federal budget deficit and tax cuts for businesses and individuals would do at least a little to improve the job situation. But there is no consensus that any of these ideas would do a lot to help.

More than three-quarters of Americans say that additional spending on roads, bridges and other public works would improve the job situation a lot (36%) or a little (41%). Smaller majorities say that cutting taxes on businesses (70%), budget cuts to reduce the deficit (65%) and cutting personal income taxes (60%) would do a lot or a little to help the job situation.

For the most part, these opinions are little changed from a June 2010 survey by the Pew Research Center for the People 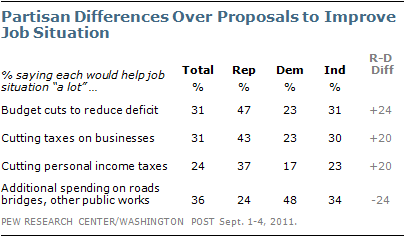 & the Press. There continue to be wide partisan differences in views of proposals to improve the job situation. But none of the proposals is viewed by a majority of Republicans, Democrats or independents as helping the jobs situation a lot.

Nearly half of Democrats (48%) say that additional spending on roads, bridges and other public works would help the job situation a lot, far more than the percentages saying tax cuts or budget cuts would 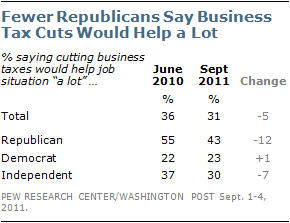 help a lot. Among Republicans, 47% say budget cuts to reduce the deficit would help a lot, while 43% say cutting taxes on businesses would help a lot and 37% see personal tax cuts as helping a lot.

The proportion of Republicans who say that cutting taxes on business would do a lot to help the job situation has declined, from 55% last summer to 43% currently. Opinions have been more stable among Democrats and independents. 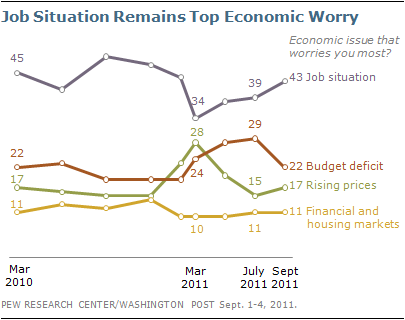 The survey finds that the job situation remains the public’s top economic worry by a wide margin: 43% say the job situation is the national economic issue that worries them most. Far fewer cite the budget deficit (22%), rising prices (17%) or problems in financial or housing markets (11%).