The study found a segment of respondents who expressed positive views about everything – even when that meant giving seemingly contradictory answers. This suggests untrustworthy data that stands to bias poll estimates. If a nontrivial share of respondents seek out positive answer choices and always selected them (e.g., on the assumption that it is a market research survey and/or that doing so would please the researcher), that could systematically bias approval ratings upward. The study included seven questions in which respondents could answer that they “approve” or “favor” something. Specifically, the survey asked: 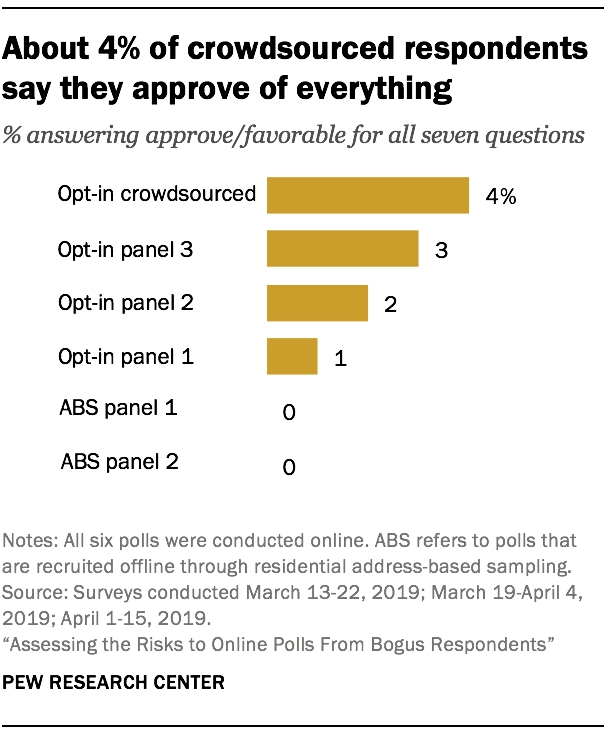 If respondents are answering carefully, it would be unusual to express genuine, favorable views of Emmanuel Macron, Angela Merkel, the Affordable Care Act (ACA), Theresa May, Donald Trump and Vladimir Putin. The first half of the list tend to draw support from left-leaning audiences while the latter are more popular with conservative audiences.

The study found 2% of respondents gave an approve or favorable response to each of these seven questions. The rate was highest in the crowdsourced poll (4%) followed by all three opt-in panels (ranging from 1% to 3%). There were a few such respondents in the address-recruited polls, but as share of the total their incidence rounds to 0%. Researchers confirmed that this behavior was purposeful – not simply a primacy effect – in a follow-up experiment in which the order of responses was randomized (see Chapter 8). 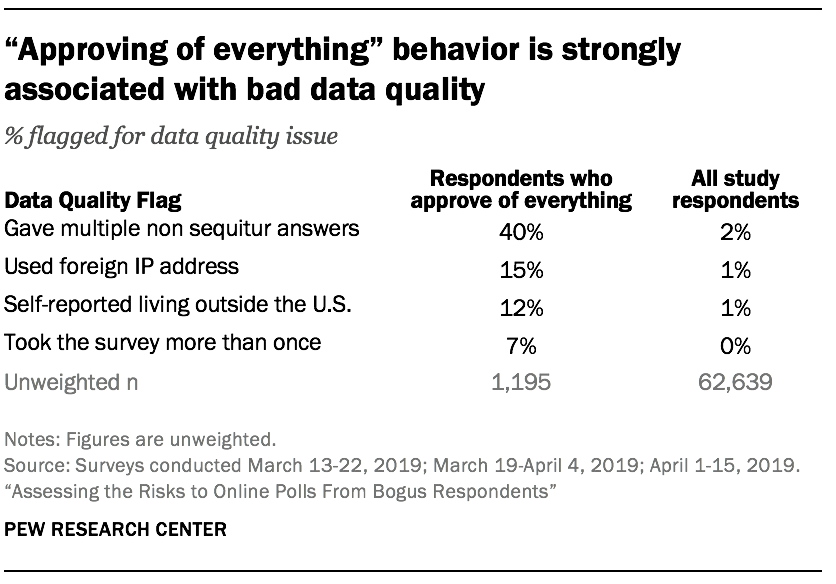 While approving of everything might seem benign, it was strongly associated with bad data quality. About one-in-seven (15%) respondents who approved of everything had an IP address from outside the U.S. About 7% of always-approving respondents took the survey multiple times, and a sizable share (40%) gave multiple non sequitur answers to the open-ended question. The rates of all these behaviors are significantly higher than among all the study respondents.

While some of these respondents may have been answering honestly, a more plausible explanation is that this pattern represents error. Critically, this error is not mere “noise” but rather systematically changes the poll results.

Next: 3. Imperfect metrics of whether respondents live in the U.S.
← Prev Page
Page2You are reading page3Page4Page5Page6Page7Page8Page9Page10Page11Page12
Next Page →