Republicans are more likely to see made-up news as a big problem, more inclined to think it negatively impacts the country’s political system and more likely to predict the problem will get worse. They also say they come across it more frequently. And while majorities of both parties blame politicians and their staff for the creation of made-up news, Republicans and those who lean to the Republican Party are far more likely than Democrats and Democratic leaners to blame journalists for the creation of made-up news and to say the news media have the responsibility to fix it. 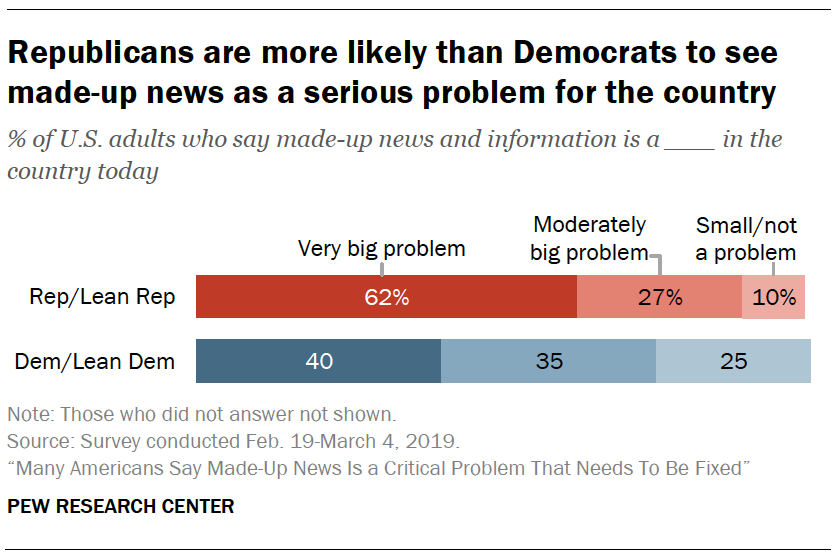 Americans’ views of the news media are largely divided politically, and these divides have widened in recent years. Republicans, on the whole, are much more likely to express negative sentiments about the news media.

That broader skepticism about news and the journalists who produce it also plays out in the arena of made-up news and information.

Republicans are substantially more likely to think made-up news and information is a very big problem facing the country today. About six-in-ten Republicans and Republican-leaning independents (62%) say this, compared with four-in-ten Democrats and Democratic leaners.

And just as Republicans are more likely to see made-up news as a serious problem for the country, they are also more pessimistic about the future of the issue: 64% of Republicans say it will get worse in the next five years, compared with 50% of Democrats.

As for how to address the issue, members of both parties are most likely to see partisan schisms as a major hurdle. About seven-in-ten Republicans (69%) say political divides are a very big challenge in addressing the issue of made-up news and information, slightly higher than the 61% of Democrats who say the same. Roughly four-in-ten of those in both parties say that financial gain, digital technology, lack of effort and low awareness of current events are very big challenges in addressing the issue. 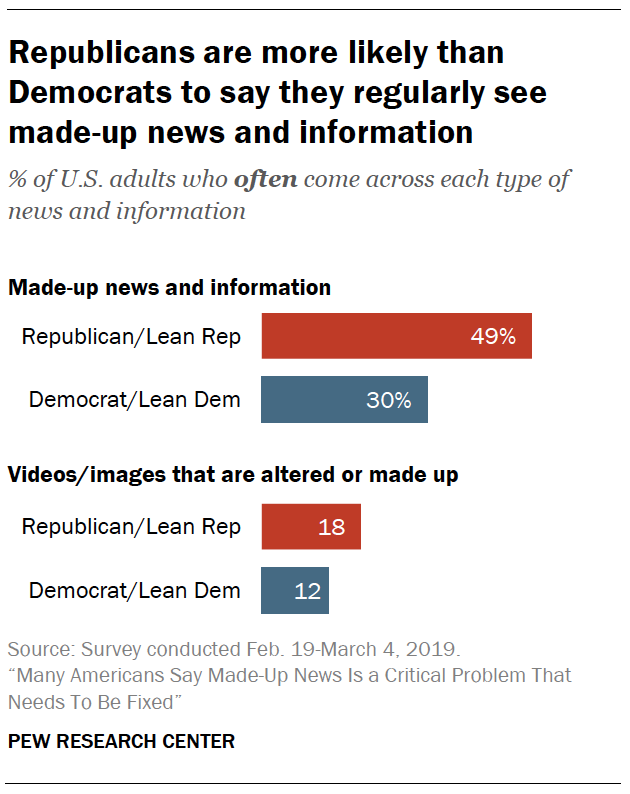 And although the share of Americans who often come across made-up or altered videos and images is smaller, Republicans are slightly more likely than Democrats to say they often comes across them (18% vs. 12%).

One area where members of the two parties are more in sync is in how frequently they share and discuss made-up news. About half of both Republicans (51%) and Democrats (47%) say they have unknowingly shared made-up news, and about one-in-ten have knowingly done so (9% and 11%, respectively). Slightly less than half of both parties sometimes discuss the topic (47% and 46%, respectively), though Republicans are more likely to often do so (20% vs. 12% of Democrats). 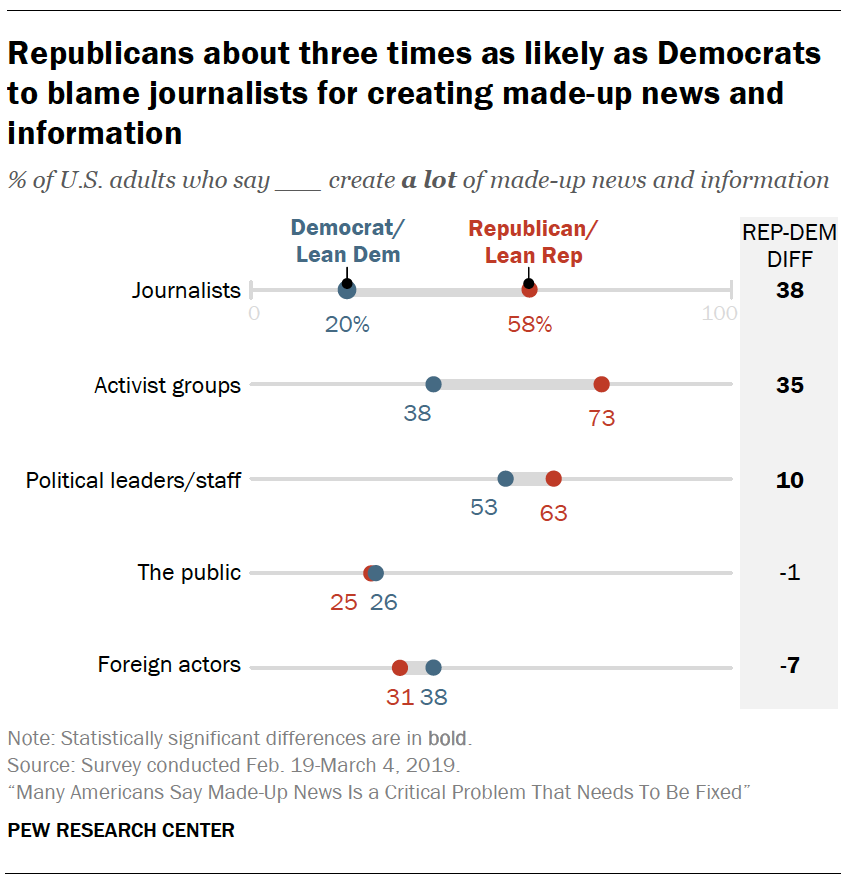 The gap narrows when it comes to blaming political leaders and their staff, with 63% of Republicans and a majority of Democrats (53%) saying this group creates a lot of made-up news. 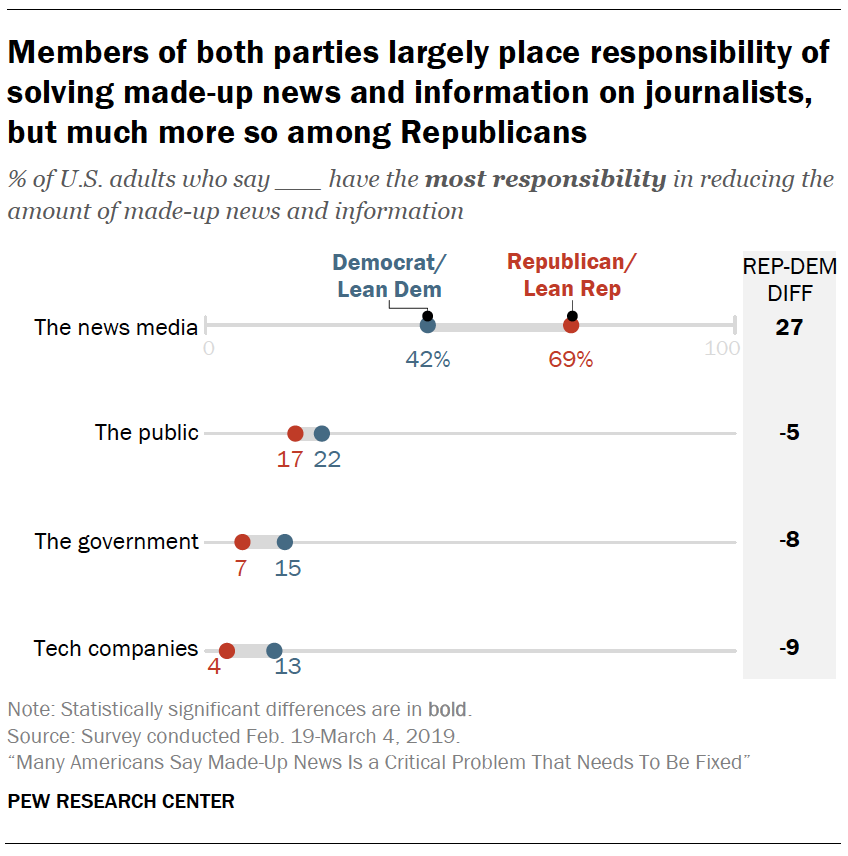 When asked who has the most responsibility to reduce the amount of made-up news and information, about seven-in-ten Republicans (69%) point to the news media, 27 percentage points higher than Democrats (42%). Members of both parties, though, are more likely to put the responsibility on the news media than any other group or institution – and by a wide margin. 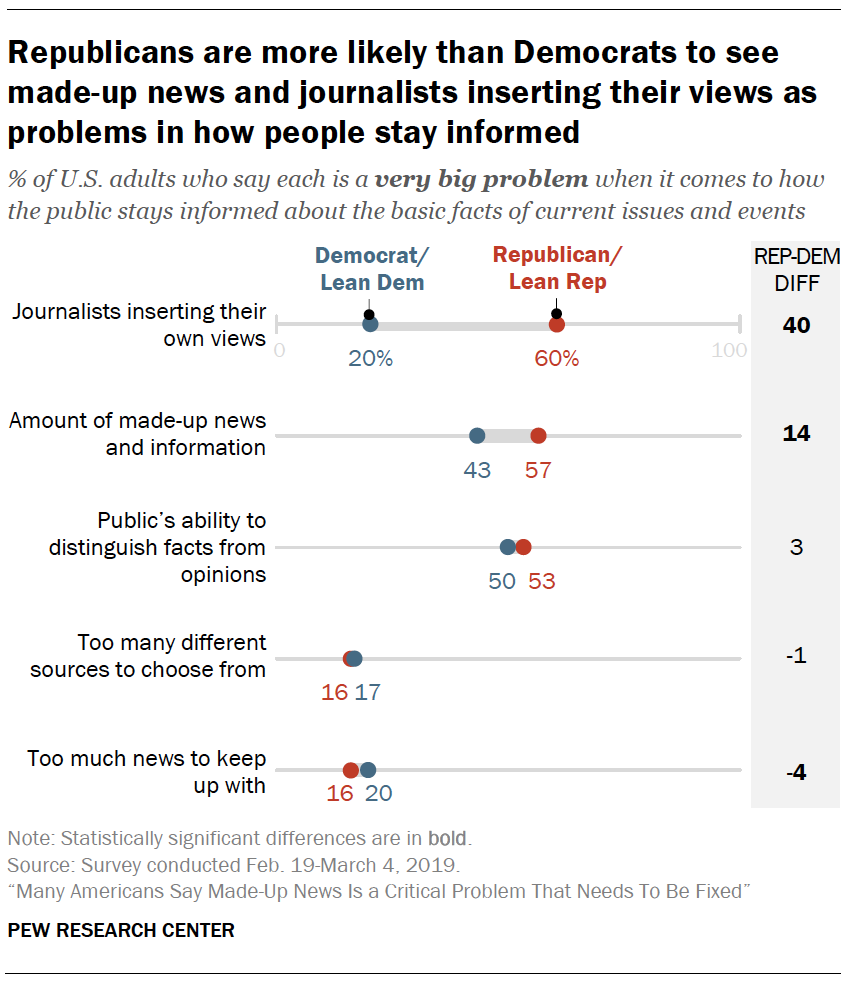 Republican skepticism toward the news media also emerges when people are asked about factors they think impede the public’s ability to stay informed about current events.

Republicans and Republican-leaning independents see journalists inserting their own views and the amount of made-up news and information as the biggest obstacles in keeping the public informed (60% and 57%, respectively, identify these as very big problems), followed closely by people’s ability to distinguish facts from opinions (53%).

Democrats and Democratic leaners, meanwhile, rank the public’s ability to separate facts from opinions at the top of the list, with half identifying that as a very big obstacle to keeping the public informed. That’s followed by the quantity of made-up news and information (43%), with journalists injecting their views much farther down on the list (20%).

Overall, Republicans are more likely than Democrats to think that the amount of made-up news is a very big problem in how the public stays informed (57% vs. 43%, respectively). But that pales in comparison to the difference between the parties over whether they think journalists inserting their own views is a very big problem, with six-in-ten Republicans saying this, compared with two-in-ten Democrats – a 40 percentage point difference.

Made-up news has led majorities in both parties to check facts in a story; Republicans more likely to stop getting news from a news outlet, reduce news intake 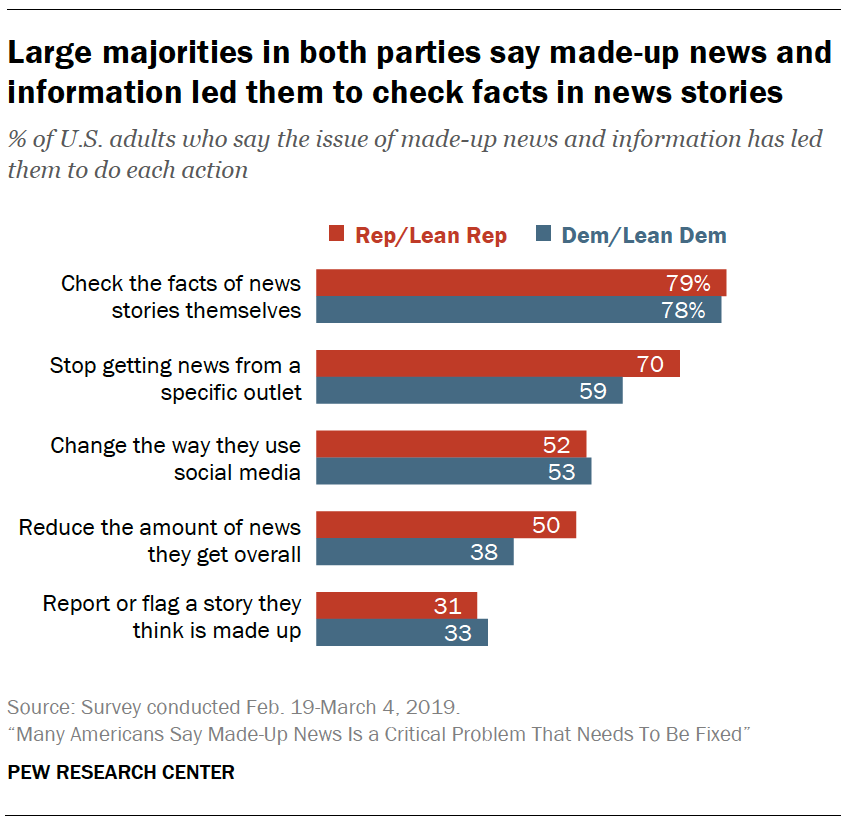 Some of the sharp partisan differences fade when Americans are asked about actions they take in response to made-up news and information. Overwhelming majorities of both Republicans (79%) and Democrats (78%), for example, say they fact-check news stories themselves. And they are about as likely to change the way they use social media (52% of Republicans and 53% of Democrats) and to report or flag a story (31% of Republicans and 33% of Democrats).

But differences exist in some news consumption changes adopted in response to made-up news. Republicans are more likely than Democrats to say they’ve stopped getting news from a specific outlet (70% vs. 59%), and they are more likely to have reduced the amount of news they get overall (50% vs. 38% of Democrats).

Next: 5. The highly politically aware are more concerned about made-up news, while the less aware spread it more
← Prev Page
Page1Page2Page3Page4You are reading page5Page6Page7Page8Page9Page10
Next Page →