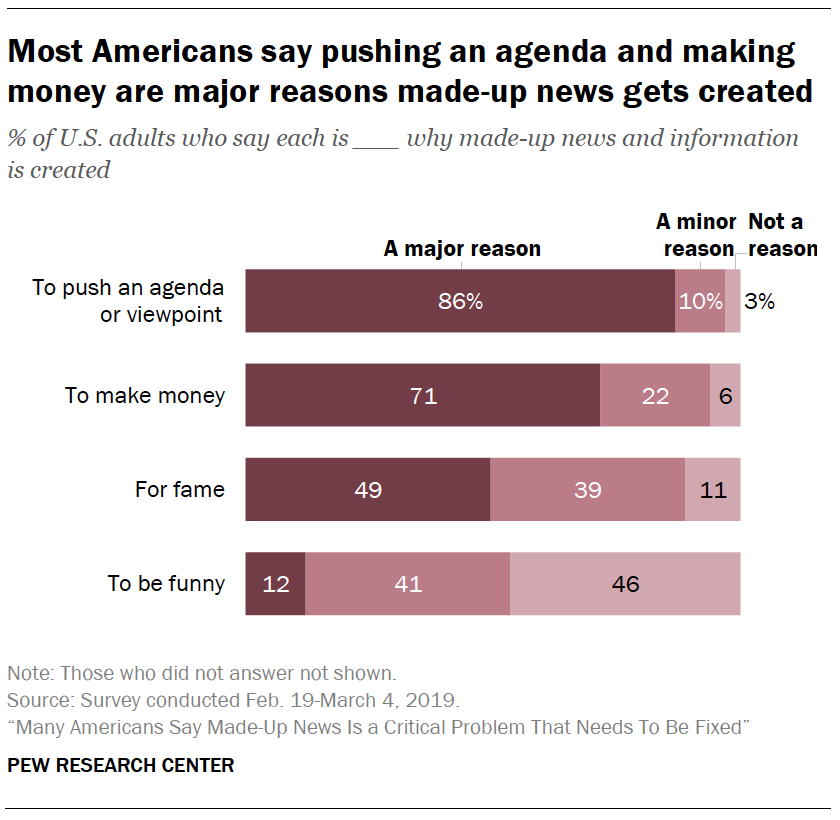 Americans sense two central motivations behind the creation of made-up news and information: the desire to push an agenda and to make money. 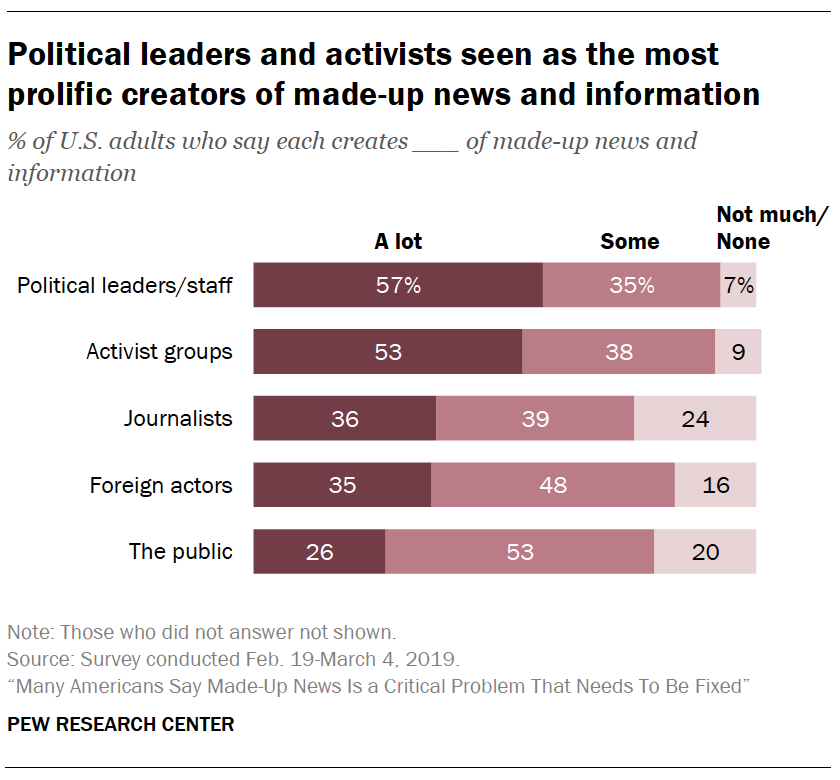 The two groups thought to be the primary creators of made-up news seem closely connected to the desire to push an agenda or viewpoint. Close to six-in-ten U.S. adults (57%) say political leaders and their staff create a lot of made-up news, and about half (53%) say this of activist groups.

While journalists are less likely to be blamed for creating made-up news than other actors, they are seen as the ones most responsible for reducing it.

Among four groups asked about – the news media, the public, the government and technology companies – about half of U.S. adults (53%) say the news media have the most responsibility to reduce the amount of made-up news and information. This is more than twice the rate of any other group: Two-in-ten put the onus on the public, 12% on the government and 9% on technology companies.

Most say a lot of made-up news and information is about national news topics, especially politics and entertainment 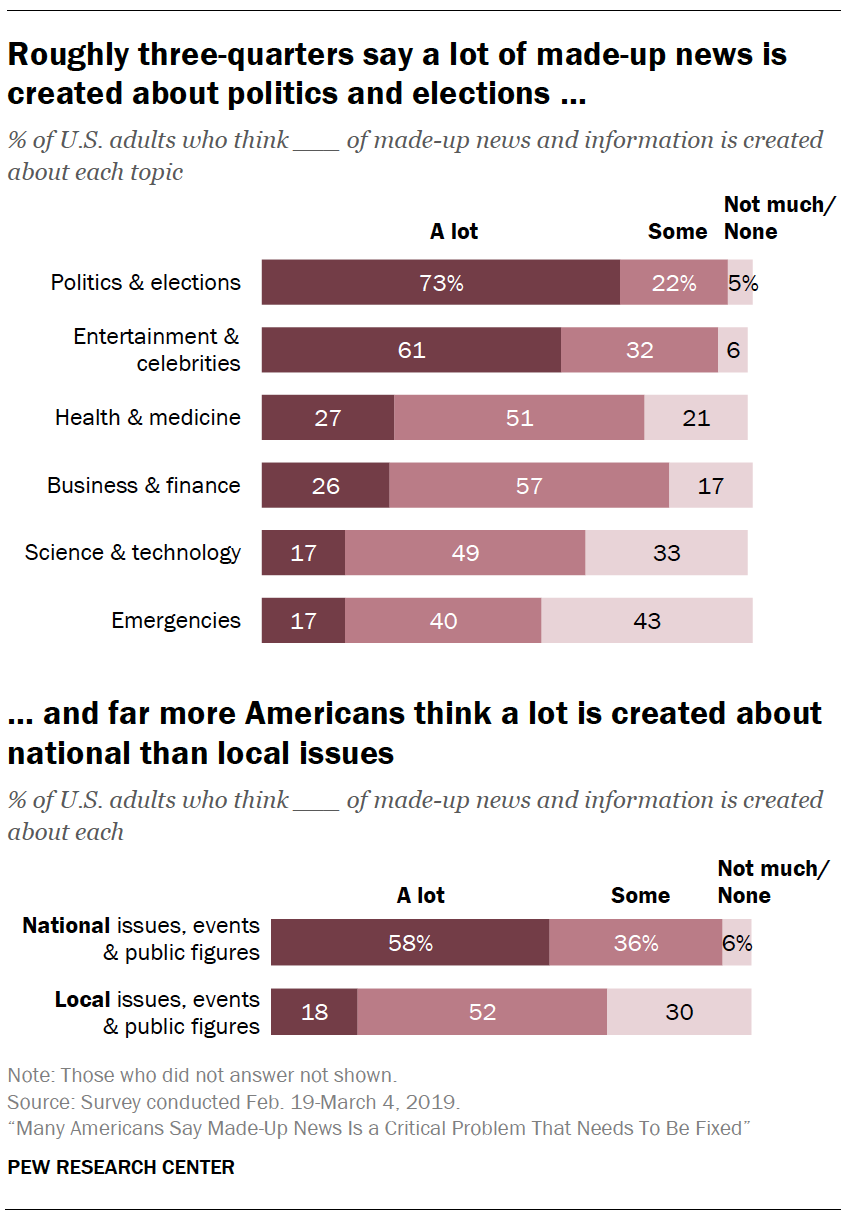 Much of the news coverage and public discussion of made-up news and information has occurred in the context of politics and elections. This has resonated with the public.

Of six topics asked about, roughly three-quarters of the public (73%) says a lot of made-up news is created about politics and elections. About six-in-ten Americans (61%) say a lot is created about entertainment and celebrities.

Both politics and entertainment far exceed any other topic. About a quarter say a lot of made-up news gets created in the areas of health and medicine (27%) and business and finance (26%), while just 17% say a lot is created about science and technology or emergencies such as shootings or natural disasters.

Most have taken steps in response to made-up news

Most Americans say they have altered their news consumption or technology habits in response to made-up news and information they come across. 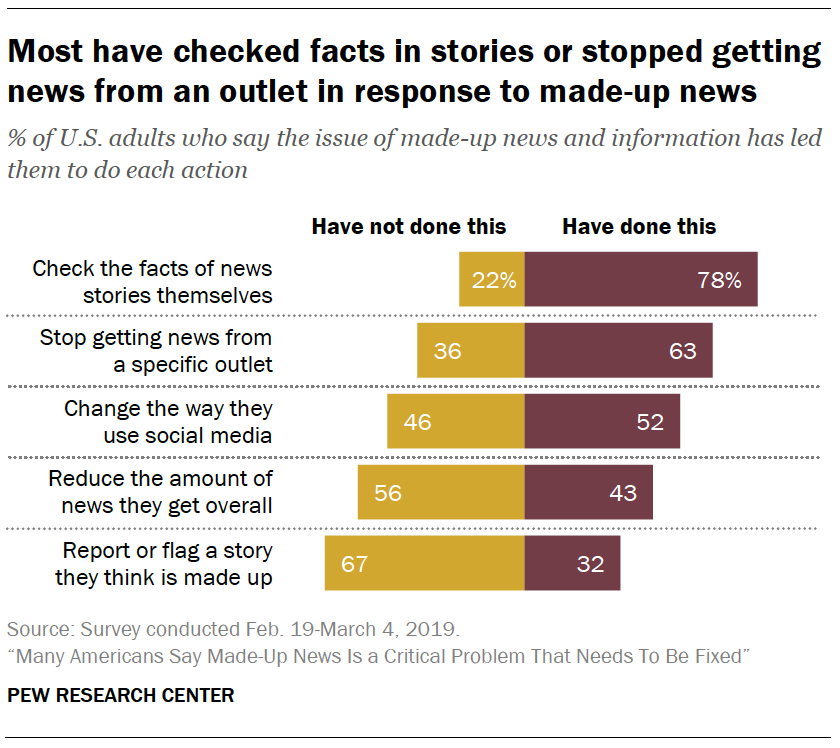 Roughly eight-in-ten U.S. adults (78%) say they have checked the facts of news stories themselves, 63% have crossed a specific outlet off their list of providers and about half (52%) have changed the way they use social media. More than four-in-ten (43%) say they have responded by reducing the amount of news they get. And about one-third (32%) have publicly flagged or reported a story that they thought was made up. 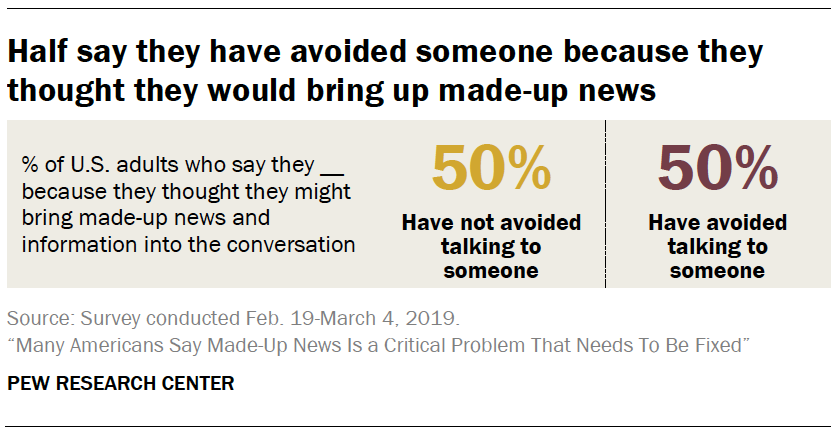 Made-up news has also had an impact on interpersonal relationships, according to the survey. Half of U.S. adults say they have avoided talking to someone because that person might bring made-up news and information into the conversation. 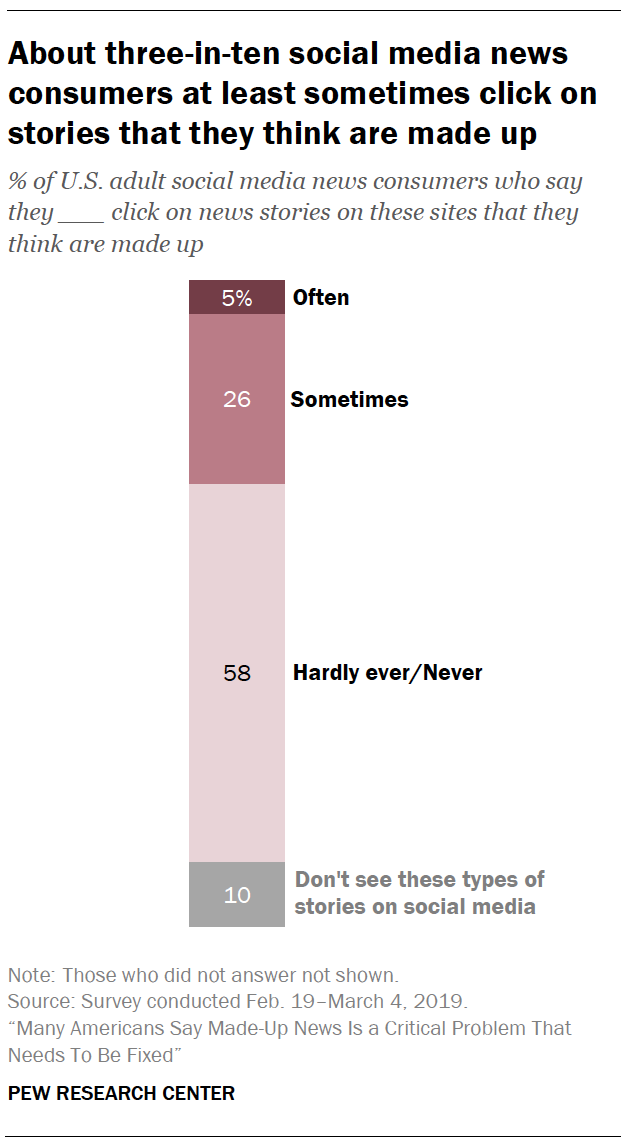 It also influences how people use social media. Of the 76% of Americans who ever get news through social media, half have blocked a news source because they thought it was posting made-up news or information, the same proportion who say they have blocked someone they know for that reason.

That doesn’t mean that social media users are completely ignoring made-up news. About a third of them (31%) say they at least sometimes click on the link to a story in their news feed they believe is made up – but 58% say they hardly ever or never do so.

Next: 3. Americans think made-up news and videos create more confusion than other types of misinformation
← Prev Page
Page1Page2You are reading page3Page4Page5Page6Page7Page8Page9Page10
Next Page →