Another question around the mix of information providers available on the web today is outward political alignment: the degree to which sources align themselves directly with a particular party or ideological agenda. To help answer this question, researchers examined whether each site in the News Organizations and Other Information Providers categories labeled themselves as conservative or liberal and whether each described itself as a producer of news that is not typically offered by mainstream sources.

Based on language appearing in the “about” sections of sites’ websites and social media profiles, few of the sites linked to in tweets about immigration during the early days of the Trump administration explicitly specified a liberal or conservative ideology. 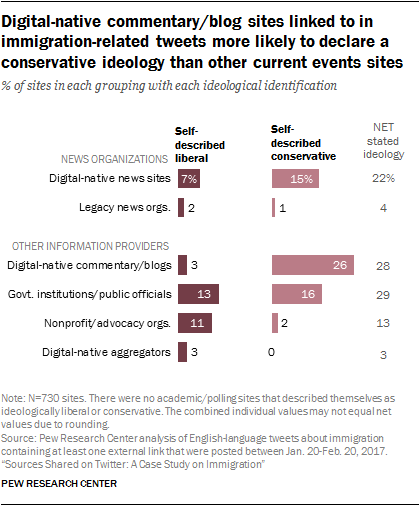 Just 14% of the sites examined declare either ideology. Sites are about equally as likely to specify their ideology to be conservative (9%) as they are liberal (5%).

Within the News Organizations category, legacy news organizations are the least likely to declare an ideological orientation for their content – just 4% overall, with an even split between those who specify either a conservative (1%) or a liberal (2%) ideology.6 In contrast, roughly two-in-ten digital-native news organizations (22%) specified an ideological orientation, and these sites were about twice as likely to declare a conservative (15%) as liberal (7%) ideology.

The ideological divide among sites in the Other Information Providers category also varied among site groupings. About three-in-ten government institution/public official sites (29%) and digital-native commentary/blog sites (28%) specified their ideological orientation. But while government sites were roughly evenly split between conservative (16%) and liberal (13%) self-orientation, the digital-native commentary/blog sites linked to in this study were far more likely to identify as conservative (26%) than liberal (3%). Nonprofit/advocacy organization sites (13% of which identified their ideology) were the only grouping in which sites are more likely to identify as liberal (11%) than conservative (2%).

Those sites in the government institutions/public officials grouping that declared their ideology were often those of a politician or political party, like the Facebook pages for U.S. Senate Democrats or President Trump. Those in this grouping that did not typically specify an ideology were government agencies, such as the Department of Homeland Security or the New York state government. The nonprofit/advocacy organizations that listed their ideology were often associated with broader partisan causes, such as Occupy Democrats or TeaParty.org. 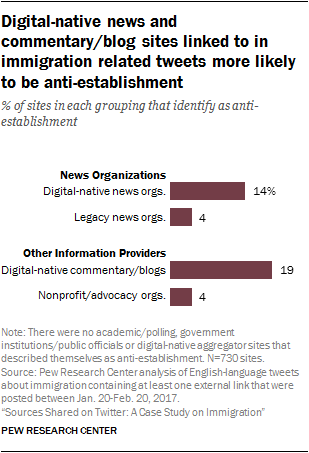 Researchers also examined these sites for language on their “about” page or associated social media profiles that position them as outside the traditional media and policy establishment or signal to the reader that the site is offering content that is distinct from what would be found elsewhere – that is, an anti-establishment orientation.

For instance, Breitbart’s Twitter profile says it provides “news, commentary, and destruction of the political/media establishment.” Others are less direct: Raw Story, for instance, says it “focuses on stories often ignored in the mainstream media” on its Facebook page.

Next: 4. Majority of tweets about immigration contained links to legacy news organizations
← Prev Page
Page1Page2Page3You are reading page4Page5Page6Page7Page8
Next Page →