Following the 2016 election, news emerged that some sites were looking to seize public attention by publishing completely “made-up” or misleading information – from inaccurate stories about Pope Francis endorsing Trump to claims that a Washington pizzeria was being used by members of the Clinton campaign for child prostitution to sites that mimic popular news sites for parody or satire.

Defining what is or is not “fake news” or which sites in this list publish “made-up” or misleading information is outside the scope of this report. But, researchers took two steps to provide a window into the portion of sites that contain attributes associated with misinformation or have been previously identified as publishing this kind of information. 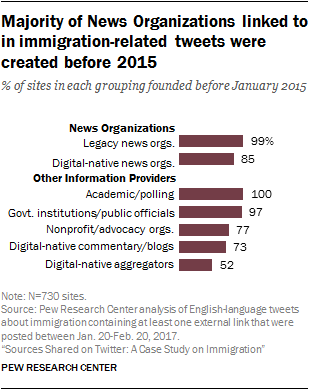 First, many of the “made-up” news publications identified by external organizations following the election were found to have been newly created. As such, researchers coded all sites in the News Organizations and Other Information Providers categories for whether they were created before or after Jan. 1, 2015.

The sites in the Other Information Providers category also tended to be older. Virtually all academic/polling sites (100%) and government institution/public official sites (97%) were created before 2015, as were at least seven-in-ten nonprofit/advocacy organizations (77%) and digital-native commentary/blog sites (73%). The one site grouping to have a more even mix of older and younger sites is digital-native aggregators – those who compile and distribute content created by others (52% were created before 2015 and 48% since then).

Second, researchers compared the sites found in this analysis to those published in lists by external organizations. To do so, the Center created a combined list of 468 websites by merging relevant “fake news” lists produced by BuzzFeed, FactCheck.org and Politifact. These lists were selected because they met the criteria of having staff from these organizations directly evaluate the content of each website included rather than compiling them from other existing lists. Additionally, these lists were cited in media reports as reputable sources of information or were part of fact checking initiatives, such as the Facebook fake news initiative.

Only 18 of all 1,030 sites included in this study (2%) overlapped with the sites in these lists. These were most commonly either digital-native commentary/blog sites (eight sites) or digital-native news organization sites (six sites). These sites were split about equally between those that were created before and after Jan. 1, 2015.