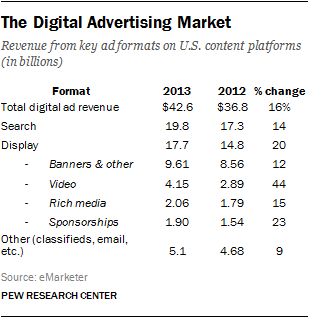 As print advertising in particular has seen rapid declines, a burning question has been whether ad revenue on the digital side can provide enough revenue to cover at least a significant share of those losses. As laid out above, the vast majority of ad revenue supporting the news industry is still derived from legacy formats of print and television. New outlets built around ads in the digital space account for only a very small slice of total advertising. Where are there advertising opportunities for news in the digital space? How much promise do formats like mobile and video bring for the industry?

Digital advertising in the U.S. is a $43 billion market. Most of those ad dollars, though, go to a handful of large technology firms, such as Facebook and Google. Pew Research estimates that news properties lay claim to, at minimum, roughly $5 billion—or 12%—of the total digital ad market, a number constructed from industry groups like the Newspaper Association of America, news outlets themselves and market research firms including VSS, SNL Kagan and Borrell.

Even the more lucrative digital ad formats, however, do not command the high prices, dollar for dollar, that legacy ad formats in print or on television do. But within the digital space, certain ones command a higher premium than others. Thus, while most news content on the web is supported by banner advertisements, digital news publishers are now becoming more aggressive about embracing formats such as native advertisements, which carry a higher earning potential.

News organizations get most of their digital ad revenue from two broad categories of ads: banner and video (both of which are considered “display” advertising), while also drawing a much smaller amount from “rich” or interactive media and sponsorships. While there are no news-specific figures available for the performance of these ad types, broader industry figures are provided by eMarketer, a leading market research firm. According to the firm, both the banner and video ad sectors experienced growth in 2013.

Banner advertising—typically seen as static graphics accompanying text—is the biggest single category within the display ad market. There, total revenue across all content, including news, grew 12% to $9.61 billion in 2013.

Online video advertising (video ads embedded into other video content) saw even greater growth in 2013, both in terms of the range of outlets using them and in the revenue garnered, though from a smaller base. Revenue from these ads more than doubled in the last two years, according to eMarketer, from $2 billion in 2011 to $4.14 billion in 2013, thanks in part to the success of YouTube. 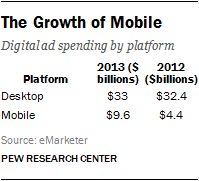 A number of digital news organizations have made native advertising a pillar in their financial strategy. BuzzFeed, The Atlantic, The Huffington Post and Mashable were early adopters of these ads and have seen strong revenue gains. BuzzFeed’s Jonah Peretti announced profitability in September of 2013 based almost exclusively on native ads. The Atlantic saw digital revenue grow from less than 10% in 2006 to 60% in 2013, driven in part by native ads. Jay Lauf, publisher of one Atlantic property, Quartz, said that he expected the site to be profitable in 2015 and that Quartz has had success with native ads.22

Aside from The Atlantic, the movement in this direction among more traditional news organizations has been slower, in part because native advertising has come with some controversy and in December of 2013 the FTC held hearings to weigh issues such as transparency to consumers. In January 2014, The New York Times released its first native ads, sponsored by Dell. And ultimately, the promise of revenue growth may well drive others to follow suit.

Beyond estimating the $5 billion in total digital ad revenue attributable to news properties, the data are too murky to slice any further. Exactly what portion of the news figure comes from conventional banner ads? Most likely, a lot. How much from native advertising and branded content? Probably little, though that may change soon. And, beyond the display data, will targeted local ads—which command higher rates than generic banners—become a critical component going forward for digital publishers? Until news-specific digital ad revenue becomes available, the broader digital ad market provides the best signposts for what is happening in the microcosm of journalism on the web.

Next: Conclusion
← Prev Page
Page1Page2Page3Page4Page5Page6Page7You are reading page8Page9
Next Page →