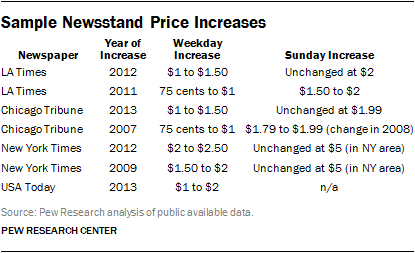 As 2013 ended, around 500 dailies—and possibly more—had implemented or had plans to implement a digital pay plan, according to Pew Research estimates. Several larger news organizations, including The New York Times and the Gannett and Lee newspapers, were seeing some success this past year. In the second half of 2013, two long-standing holdouts, The Washington Post and Digital First Media, announced an all-access subscription model for all of its dailies. And in early 2014, Cincinnati station WCPO launched a digital pay plan on its website.

Cable news channels were projected to see even greater growth in audience-based revenues, 5% in 2013, largely from increases in subscriber fees, which the channels themselves negotiate with cable providers every few years. The 2013 subscriber fee projections stand at more than half of all this sector’s revenue and total $2.8 billion.

Audience revenue growth in broadcast TV is striking, but largely because it is growing from a small base. Retransmission fees, similar to cable TV license fees, are a small but growing portion of both network and local TV station revenues, and ultimately will impact newsrooms if growth continues as projected.

Public radio data suggest that while individual giving to stations was down in 2012 by 3%, the roughly $400 million estimated for that year was the second-highest in the last 16 years for which data are available.

One question that arises is whether the growth in audience-related news revenue comes more from a larger number of people paying for news, or from fewer people paying higher prices.

The data suggest that it is more of the latter. The number of pay-TV households in the U.S. is tapering off, and the number of newspaper subscriptions (both Sunday and weekday) are flat, as are paid subscriptions to weekly newspapers, according to SNL Kagan estimates comparing 2013 and 2008. And for the six major news magazines tracked closely by Pew Research, circulation numbers are flat over all, too.

Yet the cost per consumer for these media continues to rise. The average expanded cable bill is now $61, according to FCC data, and has risen on average 6% per year since 1995, when the agency first began measuring. And, as noted above, single-copy prices have increased at many of the major dailies. The average amount of circulation revenue per subscription to a weekly newspaper is up slightly over the past five years.

In addition, these increases in audience revenues are coming at the same time as many sectors continue to witness declines in advertising revenues.

Next: A Deeper Look at the Digital Advertising Landscape
← Prev Page
Page1Page2Page3Page4Page5Page6You are reading page7Page8Page9
Next Page →