In the heat of the campaign season, what is not conveyed in the media about a candidate can be as important as what is. In the period from late May to early August, several themes that have been associated with Obama and Romney failed to gain traction in the news. 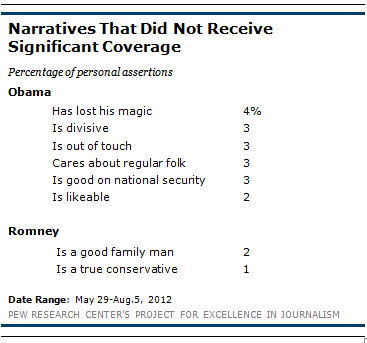 Many polls, for instance, have found that the Democrat seems to be more personally likeable than his Republican rival. But only 2% of the personal narrative about Obama has projected his likeability or talent for connecting with people, and an equal percentage has refuted that perception.

Some of the negative themes Republicans have tried to project have also not gotten much traction in the media. One of these is that idea that Obama is a divider rather than a uniter. Florida Senator Marco Rubio, for instance, asserted back in May that Obama is the most "divisive figure in modern American history." But that line of attack accounted for only 3% of all of the assertions about character and record studied about Obama. The Obama camp also appeared to have spent little effort refuting it (one tenth of 1% of the coverage).

One other subject that has not surfaced significantly in the press is national security. Traditionally, Republicans have made the case that Democrats are too soft on this subject. The Obama campaign, at least in an initial advertisement, argued that this was a strength for Obama, that he managed to withdraw from a controversial war in Iraq, killed Osama bin Laden and is accelerating a withdrawal from an unpopular war in Afghanistan. Overall, 3% of the assertions about Obama’s character and record affirmed his national security skills, and 3% refuted that idea.

Several possible narratives about Romney also showed up only modestly in press coverage.

Although Romney is the first Mormon to advance this close to the presidency, the idea that his religion would be a major topic of coverage has simply not been borne out. Only a handful of the more than 1,700 statements about Romney’s character and biography studied over these 10 weeks, just three, centered on the question of whether his religion would be a problem in the election. That subject thus did not even make the list of the top 10 narratives about the candidate.

During the Republican primaries the question of whether Romney was a true political conservative or a moderate was a significant aspect of the campaign. In the general election race, that theme has all but vanished: in all, 1% of the assertions about Romney have projected that he is a true conservative, and an equal percentage has contended he is not.

Romney has not made social or cultural wedge issues a central element of his campaign. And the idea that Romney–with his large family, deeply held religious beliefs, and espousal of conservative positions on social issues–is a moral man with good values accounted for only 2% of the themes about him. The rebuttal to that narrative, suggesting that he lacked integrity or honesty, was twice as prevalent, at 4%.

One interesting feature of these discussions about the integrity of the candidates, however small, is that they tend to be grounded in criticism of how each candidate is conducting his campaign. In other words, the discussion of integrity in the campaign so far has been something of a looking glass argument, in which each side attacks the other and complains that the other side is engaging in negative campaigning as the evidence.

Next: A More Negative Campaign
← Prev Page
Page1Page2Page3You are reading page4Page5Page6Page7Page8Page9Page10Page11
Next Page →