Taken together, this amounts to a highly negative narrative about both candidates in this campaign. The master narratives about Obama were 72% negative. The master narratives about Romney were 71% negative.  Only once before has PEJ seen a race that was depicted as negatively, the 2004 contest between Bush and Kerry. That year 75% of the personal narrative studied about Bush was negative and 70% for Kerry, numbers quite similar to this year. Only in 2000 did we find a narrative about a single candidate substantially more negative than this year, Vice President Gore, whose personal narrative was 80% negative.

That same year, we found that 48% of the assertions studied by about George Bush were negative (vs. 52% positive).

Bush’s portrayal became much more negative four years later (jumping to 75%) when he ran as a sitting president. That year his opponent John Kerry’s was virtually the same, (70% negative), though during the pre-convention period studied (a similar period to this year) what stood out as much was how little of the campaign coverage focused on Kerry’s record and character. It amounted to only a little more than a quarter (28%) of all the personal narratives studied about the two candidates, and the polling that year showed that voters had only indistinct impressions of the Democratic nominee.

In 2008, when we conducted this study during the primaries, the portrayal of all the major candidates was more positive than it is today. For Obama, 31% of his character narrative was negative while 69% was positive. For Hillary Clinton, his primary opponent, the numbers were similar-33% negative to 67% positive. The character narratives about John McCain, conducted before he had fully wrapped up the nomination, were notably different-57% negative versus 43% positive. However, almost all of that negative narrative about McCain-just under 90% of it-was about a single theme, that he was insufficiently conservative to animate the Republican base.

If the master narratives about the two candidates in 2012 have been predominantly negative so far, it has also been unrelenting so. In no single week during those two-and-one-half months did either Obama or Romney enjoy a period in which the narrative about their character and record was more positive than not. Nor did it ever come close. Negative themes outnumbered positive in the press every week for both men.

The static nature of the narrative reflects a fundamental reality of the race in recent months. There has been no signature event that might cause the media to re-evaluate the storyline or perception of either candidate. In lieu of that, both campaigns have been engaged in a fairly static debate, one waged largely through the candidates, their surrogates and other allies repeating talking point themes over several months. 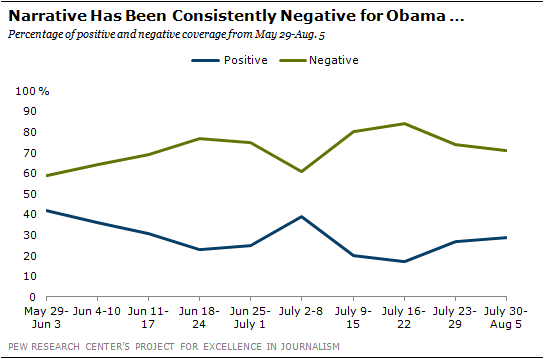 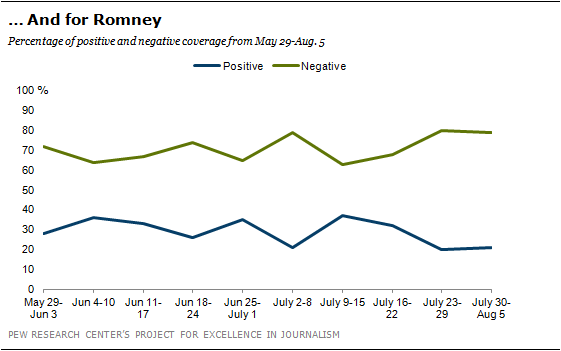 Next: Sources of the Assertions
← Prev Page
Page1Page2Page3Page4You are reading page5Page6Page7Page8Page9Page10Page11
Next Page →