If coverage of Obama focused largely on his handling of the economy, the media narrative about Romney was more varied. Romney’s biography generated more press attention than any other subject. The largest of component of this (14% of Romney biographical assertions studied) raised doubts about Romney’s career at the Bain Capital private investment firm. And the data show that much of this negative narrative came from citing the Obama campaign and its ads.

That was followed by a more personal narrative (13%) that Romney was a wealthy elitist, some of which came from the Obama camp, but which also came from journalists and outside experts. 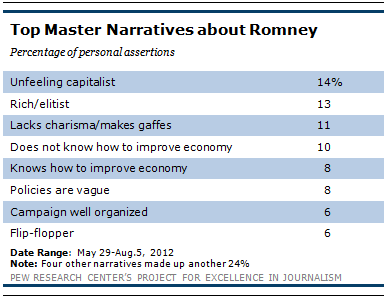 owever, these two themes were closely followed by the narrative that Romney was an awkward campaigner (11%).

The next two biggest narratives about Romney involved basically two sides of an argument about whether his economic ideas would help or hurt the economy. Arguments affirming that Romney knew how to fix the economy, or had good ideas for doing so, made up 8% of the personal coverage about him studied over these 10 weeks. The counter-argument, that Romney’s ideas would hurt the economy, was actually slightly larger (10%). In short, if Romney’s economic theories were one of the key arguments he wanted to project in the press to win the White House, he has struggled to do so. It is a wash in the coverage whether his economic theories are good or bad, though that he has fared better than Obama in this regard.

The arguments over Romney’s economic policies, in turn, were closely followed by a related but slightly different theme in the coverage about Romney, that his policies, most notably his economic ones, were too vague (8% of the Romney themes studied). This emerged as a distinct theme in the coverage and may partially explain the appeal for Romney of selecting Paul Ryan, the author of the House budget plan, as a running mate.

These top six narratives about Romney were also followed by two more themes that were almost as large-that Romney ran a well-organized campaign (6%) and that he was a flip-flopper (6%).

This variety of narratives about Romney is part of what stands out in the coverage about him. While just four themes filled 73% of the press discussion about Obama, it took eight different narratives to amount to a similar percentage for Romney.

The idea that Romney was a hard-hearted capitalist and that Bain Capital was more about destroying jobs and making money for investors than building up the general economy was a persistent one over these 10 weeks.  That theme ranked as either the No. 1 or No. 2 narrative about Romney in seven of the 10 weeks studied.

In the coverage, journalists often noted that this was coming from the Obama camp. In mid-July, CBS News political director John Dickerson put it bluntly. Obama "wants to make Bain a four-letter word."

And some of this theme came directly from the president. In late-June remarks in Florida, Obama said that the Romney campaign "argue[s] that if you help corporations and wealthy investors maximize their profits by whatever means necessary, whether it be layoffs or outsourcing, union busting or whatever means available, that will automatically translate in jobs and prosperity to benefit everybody," he said.

The related idea that Romney was an elitist also showed up consistently over the 10 weeks. Often these were sparked by stories about his personal wealth, whether they related to his expensive homes or the show horse owned by his wife.

Shortly after The New York Times published a June 6 story featuring neighbors grumbling about Romney’s California beach house, late night comedian Jimmy Fallon joked that the candidate’s Secret Service team "is bothering the people who live by his beach house. Romney had a lot of questions about the complaint, such as ‘Which beach house?’"

The theme that the GOP nominee lacks charisma or is prone to gaffes gained particular force the week of July 23-29, when he stumbled during an overseas tour, first by raising security concerns about the London Olympics and then by stepping onto the third rail of Mideast politics-the Israeli/Palestinian standoff.

Romney "is perhaps the only politician who could start at trip that was supposed to be a charm offensive by being utterly devoid of charm and mildly offensive," liberal host Rachel Maddow quipped, quoting the London Telegraph newspaper.

Next: What was Missing from the Candidates' Narratives
← Prev Page
Page1Page2You are reading page3Page4Page5Page6Page7Page8Page9Page10Page11
Next Page →