Overall, the volume of press discussion of character and record has been evenly divided between the two contenders. Over the 10 weeks studied from the end of May to early August, 50% of the assertions about the candidates were about Obama and 50% about Romney. 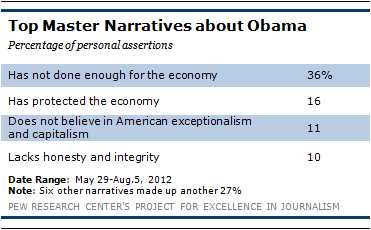 This stands in contrast to the last campaign in which an incumbent president faced a challenger in 2004. That year, when President George W. Bush opposed Democratic Senator John Kerry against the backdrop of the war in Iraq, 72% of the assertions during a similar period were about the president and just 28% about Kerry. Perhaps not coincidentally, our survey that year found that the public had a hard time associating character traits with Kerry at this point. That imbalance may have reflected choices by the two campaigns: Bush not engaging Kerry, and Kerry laying low while the president dealt with controversies involving the war.

This year, however, the strategic decisions have been different. Both campaigns have been highly visible, and the findings suggest that they have trained their rhetoric and messaging more on undermining their rival than on making an affirmative case for themselves.

To begin, the data show that Romney’s campaign has tried to focus the discussion on one overarching issue-the U.S. economy-and that it has been successful in casting that issue, in the press coverage of Obama, in a negative light.

Of the messages about Obama, the most prevalent theme has been that he has not done enough to fix the economy (36% of the assertions about Obama’s character and record studied). That was followed by essentially the counter-argument made by the Obama campaign-that the economy would have been worse without the actions his administration took (16% of Obama themes).

This argument, defending Obama’s record, registered as the one prominent positive character narrative about him in the coverage, and by a wide margin. No other positive theme about Obama accounted for more than 3% of the assertions about the president.

The third most prevalent narrative about Obama was more subtle, but one related to the economy, the charge that the president does not believe in American capitalism and its notions of individual success (11%). That was followed by another negative narrative, one that argued that Obama and his campaign lacked integrity. This narrative, which made up 10% of the assertions about character and record studied, often involved the idea that his campaign engaged in negative campaign tactics or stretched the truth in its rhetoric.

One striking feature of the coverage of Obama is how focused it was around these few narratives. Together, these four themes-two about the economy, one about his belief in capitalism and one challenging his integrity-made up 73% of all the character and biographical assertions found in the coverage about Obama.

The criticism of Obama’s economic record came from a variety of sources, including many prominent Republican politicians. And the underlying theme was that the president had squandered his opportunity to fix the economy and was thus responsible for the current problems.

"President Obama has had his chance," former Minnesota Governor Tim Pawlenty declared in an interview on the PBS NewsHour in early June. "He hasn’t been able to get this economy ignited and recovering in any meaningful way."

Often, GOP partisans cited economic statistics as their proof that Obama’s policies had failed. "The president has given us an abysmal economy," Congressman Paul Ryan-who would later become Romney’s running mate-declared on Sean Hannity’s Fox News Channel show in early June. "We’ve had the most stagnant economic recovery we’ve had since World War Two, and government spending is the highest it’s been since World War Two."

The case for Obama’s policies often also came from partisans, usually Obama’s allies attempting to showcase elements of the economy that had improved, which they credited to his stewardship.

The idea that Obama does not believe in capitalism nor understands business success was not as consistent in the narrative as the criticism of his handling of the economy. It ebbed and flowed from week to week, reaching its apex in mid and late July, shortly after the president, speaking about the role of government in fostering business success, used the phrase, "if you’ve got a business, you didn’t build that."  That was quickly seized on by Republicans as an example of Obama’s disdain for individual business accomplishment.

News organizations in some cases also found small-business people who felt the president was criticizing their accomplishments with his remark. The Wall Street Journal interviewed a Colorado computer company owner who criticized Obama for "constantly attacking the people who create jobs." 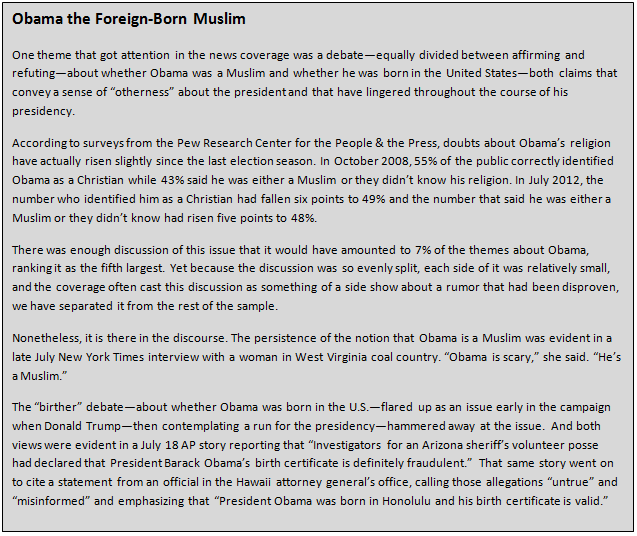 Next: The Master Narratives about Romney
← Prev Page
Page1You are reading page2Page3Page4Page5Page6Page7Page8Page9Page10Page11
Next Page →