The way the candidates’ character and biography are portrayed was largely consistent across different media sectors, but there were some striking exceptions-and those came from cable news and radio talk.

To a great extent, moreover, these ideological media are playing offense rather than defense-that is, spending considerably more time attacking the candidate they oppose than extolling the virtues of the one they like.

In a look across conservative talk radio and cable talk programs, 7% of the character assertions about Obama were positive, compared with 93% that were negative over these 10 weeks. This universe includes the Fox News programs Hannity and The O’Reilly Factor, along with the talk radio shows of Rush Limbaugh and Sean Hannity. The discussion on these programs about Romney, by contrast, was more muted, 62% positive and 38% negative. 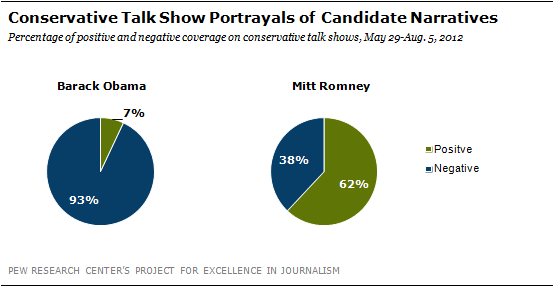 Virtually the same pattern is true if one looks at the universe of liberal radio and cable talk show programs. The liberal shows studied included The Rachel Maddow Show and The Ed Show on MSNBC, along with Ed Schultz’s radio program. Here, during the 10 weeks studied, 11% of the Romney character narrative was positive while 89% was negative. And the numbers for Obama mirror what we found in conservative talk about Romney. Here, 64% of the liberals’ assertions about Obama’s character and biography were positive and 36% negative. 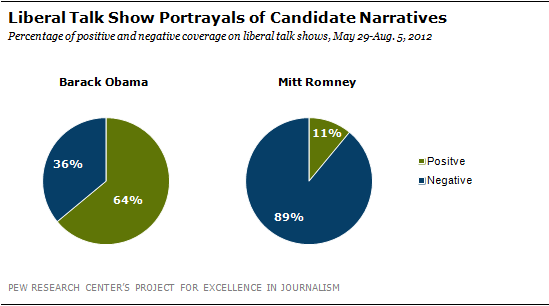 A similar pattern can be found in looking just at the discourse on MSNBC and on Fox News.

On the Fox programs studied, 14% of the master narrative about Obama was positive for the 10 weeks studied, while 86% was negative. And most of this-70% of all the Obama discussion on Fox-consisted of three themes: that he had not done enough for the economy (39%), he did not believe in capitalism (18%) and he is not honest or a person of integrity (13%). 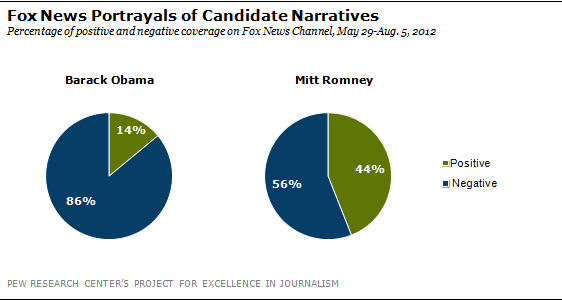 The Fox narrative about Romney was not flattering either-44% positive and 56% negative.

On MSNBC, the numbers were almost identical in reverse. Here 12% of the narrative about Romney’s character and biography was positive while 88% was negative. The discussion, as in the media generally, was more varied. The top four MSNBC themes about Romney-accounting for 54% of his narrative-were that he does not know how to fix the economy (15%), his policies are vague (14%), he is a rich elitist (13%) and he is an awkward campaigner who has made significant gaffes (12%). 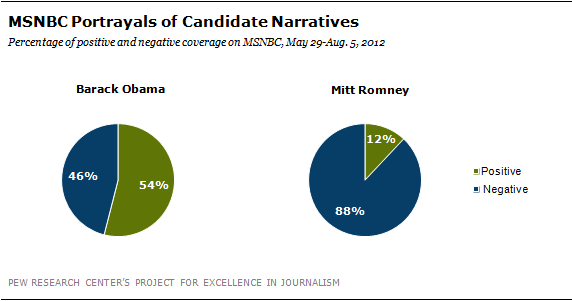 Meanwhile, the MSNBC narrative about Obama was mixed at 54% positive and 46% negative.

One other feature of this more partisan media universe is that hosts focus far more on the candidate they want to criticize than they do on the candidate their audience might be more likely to support. Among conservative radio and cable talk hosts, 84% of the discussion focused on Obama, versus just 16% on Romney. The numbers were similar on Fox alone (75% vs. 25%). The same general trend was found in liberal talk, but to a lesser degree. Among liberal talkers, 66% of the discussion of candidate record and biography focused on Romney, versus 34% on Obama. The numbers on MSNBC were nearly identical 65% to 35%.

Elsewhere in the press studied, and the treatment of the two candidates was fairly similar. In newspaper coverage, for instance, about two-thirds of the narrative for each candidate was negative (65% for Obama and 66% for Romney) with the remaining one-third positive. 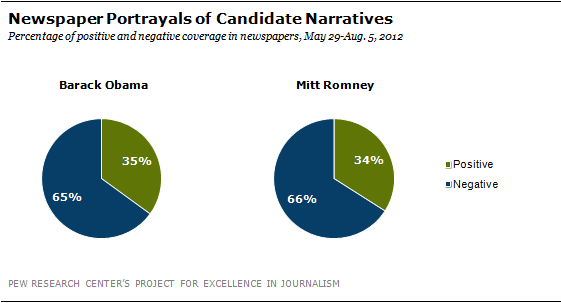 On news websites, there was a similar pattern. About one-quarter (24%) of the character narrative about Obama was positive while 76% was negative. For Romney, 31% was positive and 69% negative. 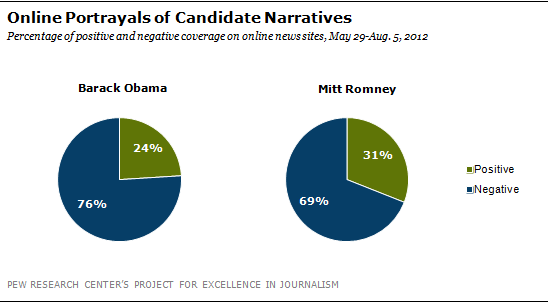 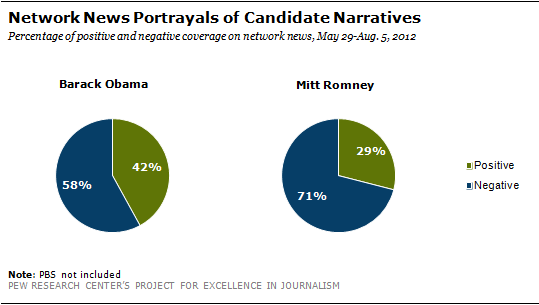 Finally, the third cable news channel, CNN, stands out among its cable rivals for looking more like the rest of the media than either Fox or MSNBC. To begin with, it offered far fewer personal narratives about the candidates than its rivals-fewer than half of what aired on either MSNBC or the Fox News Channel. And the numbers resembled what one would have found online and in print. On CNN, the master narratives about Obama’s character and record were 29% positive and 71% negative. For Romney, they were 38% positive and 62% negative.

One interesting difference among the various platforms also relates to sourcing. Different media turn for their sourcing to different places.

Campaigns have a larger voice online. Here 58% of the personal narrative about the candidates came from the campaigns and their allies versus 48% in the media overall. Conversely, experts played a much smaller role in the top content on news websites, just 2% versus 10% generally. 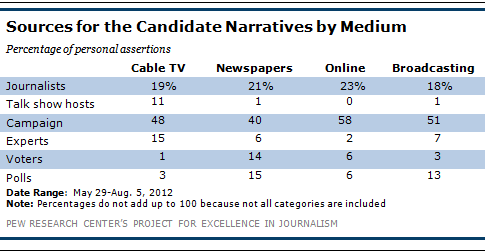 This orientation toward campaign sources online is significant, given the audience shift to digital platforms. What is it about online content that makes it different from what the public would encounter in print, for instance, or on network evening newscasts?

The study found that the top stories online are often breaking news accounts of what has occurred in the last few hours. The higher presence of campaign sources, and the lower presence of experts, may reflect this breaking news orientation. Candidates and their allies can drive this fast-paced news narrative with campaign statements and coordinated talking points that flood into newsrooms electronically. Finding outside sources to interpret the accuracy of these claims, or to put them in context, may take more time and go into analytical pieces that are less frequent and may not be the lead story.

Campaigns, by contrast, had the smallest role as a source for the personal narratives about the candidates in newspapers, at 40%. Voters and polls had a larger role than elsewhere at 14% for voters versus 5% generally, and 15% for polls versus 6% generally. These print pieces tend to be longer than what appears online or on television. They often also include material that fleshes out the day’s events, and thus the pieces try to be more analytical than the breaking news accounts that appear earlier. Journalists themselves do not play a significantly larger a role in print. In all 21% of print statements about the candidates came from journalists compared with 19% generally and 23% online. The smaller role that campaigns play in shaping the candidate narratives in print, in other words, is made up for by other sources reporters have sought out.

The negative quality of the coverage in the press also stands in some contrast to the kinds of messages that campaigns share on their own websites and in social media, according to earlier PEJ research. In those venues, the majority of the messaging from Romney and Obama were about their own candidacies (55% for Obama and 52% for Romney). In all, only 14% of Obama’s direct messaging talked about Romney. Romney’s messaging was more focused on Obama (34%). To see this earlier report on candidate direct messaging, click here. 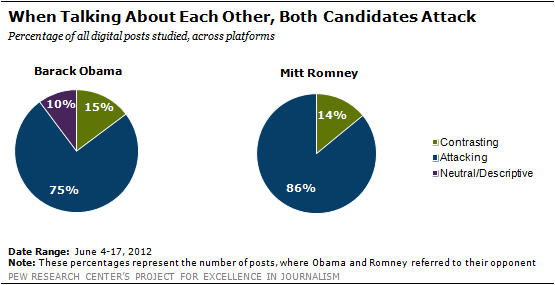 A new analysis of this data by PEJ shows that when the candidates did talk about each other on these digital platforms, however, it tended to be a pure attack that only criticized the opponent and offered nothing comparative about their own ideas or candidacy. For Romney, fully 86% of his messaging about Obama was an attack rather than comparative. For Obama, 75% of this communication was pure attack rather than comparative.

The portrayal in the mainstream press has tended to focus on this aspect of the campaign dialogue-the campaigns talking about one another. The more affirmative narrative about the candidates, in other words, could be found in their direct messaging rather than in the portrayal of the candidates in traditional media.

Next: Methodology
← Prev Page
Page1Page2Page3Page4Page5Page6Page7You are reading page8Page9Page10Page11
Next Page →