The second phase of this analysis was to survey Americans to see how public perceptions of the candidates correlated to their portrayal in the news media.

The attitudes of voters vary considerably this year with the portrayal of the candidates in the press. Overall, for instance, while the press coverage of record and biography is equally negative for the two candidates, in the view of voters, Obama fares more favorably when asked which characteristics people would associate with each contender. 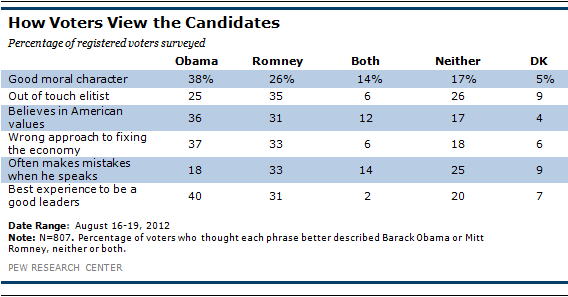 Yet voters surveyed in mid August (August 16-19) were more evenly split on this question. In all, 43% associated Obama with the idea of having the wrong economic approach (37% tie this specifically to Obama and another 6% associate it with both candidates). At the same time, 39% associated this with Romney (33% and 6%). The difference between the two candidates was within the margin of error.

Another theme present in the press coverage was that Obama did not believe in American ideas of capitalism and individualism. In the survey, slightly more people associate Obama with believing in American values than Romney, though the difference here again is within the margin of error. In all, 48% of voters said Obama believes in American values (36% specifically tie to this Obama and another 12% to both men), while 43% associate this idea with Romney (31% for Romney specifically and 12% for both).

Whether the candidates believe in American values was related to another theme in the coverage, that Romney was an elitist out of touch with regular Americans. Here the coverage and the attitudes of voters did correlate. In all, 41% associated Romney with being an elitist (35% associate just Romney, and 6% both candidates). A smaller percentage, 31%, associate Obama with elitism (25% and 6%).

Voters and the media coverage also match up more on another theme in the press, that Romney was an awkward campaigner prone to gaffes. Nearly half of voters surveyed, 47%, associate that trait with Romney (33% with Romney specifically and 14% for both), compared with 32% for Obama (18% and 14%).

Finally voters are more likely to associate good morals and good leadership experience with Obama than with Romney, even though the Romney campaign has tried to establish these themes as foundations of his candidacy. Neither theme showed up as strong narratives about Romney in the press. And among voters, Obama fares better on these themes on the eve of the conventions than Romney. In all, 52% of voters associate strong morals with compared with 40% for Romney, and 42% of voters associate strong leadership experience with Obama compared with 33% for Romney.

In short, on six different themes present in the coverage of candidates, the two men are basically split on two, and Obama fares slightly better on the other four, a perception that is more positive for the president among voters than it is in the press.

Next: The Master Narratives by Sector
← Prev Page
Page1Page2Page3Page4Page5Page6You are reading page7Page8Page9Page10Page11
Next Page →