If targeting online advertising is one potential method for news sites to get more revenue from online ads, discount sites like Groupon or other similar services were seen as another possible revenue stream for news.

The initial popularity of Groupon and then of competing discount sites like LivingSocial was seen by many in the news business as a promising way to bring in new ad revenue. Several news organizations even started their own coupon-style services to get a larger cut of potential revenue. But recent events, such as lower-than-projected revenue in the third quarter for Groupon and LivingSocial and the troubled IPO of Groupon, have cast doubts on whether these businesses will be as significant a revenue source in the future as initially anticipated.

About half of the sites studied, 16 of the 22, carried some discount/coupon advertising. But on only five did discount ads make up more than 10% of all the ads studied. For the most part, sites that created their own discount programs tended to rely on these ads more. 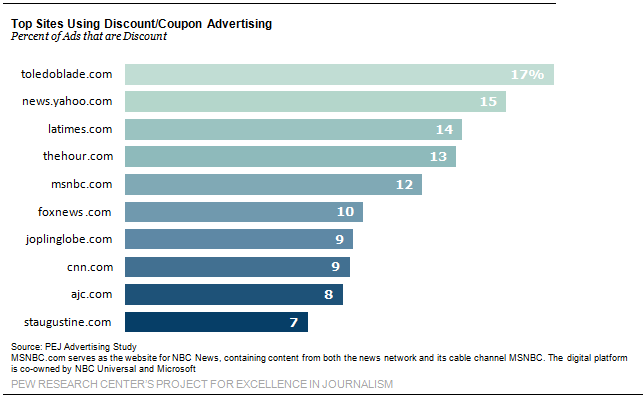 Among nationally oriented sites, Yahoo News carried the greatest percentage of discount/coupon advertising, 15% of the ads studied. The majority of these were from the national services Groupon and LivingSocial.

The other two sites with the highest use of discount advertising, the Toledo Blade and Los Angeles Times, have created their own daily deal operations to compete with the national companies.

Proprietary programs offer obvious benefits for the sites. The site can retain all the revenue from these kinds of ads rather than sharing part of each sale to the coupon partner. Second, the Toledo Blade and Los Angeles Times already have a base of local advertisers with whom they have built relationships. They may think they are better positioned than a company like Groupon to offer their customers more relevant local deals. Finally, if they can make the case that they have a loyal readership in their geographic area, they may also attract larger national brands that are looking for a more targeted daily deal than Groupon can offer.

These were the only two sites in our sample that had tried their own daily deal style business, but they are certainly not alone. Various papers now have their own Groupon-like services, such as Philly.com (the website for the Philadelphia Inquirer), which has launched its own deals site called DealYo. DealYo’s deals are for the Philadelphia area and cover a wide range of goods and services, from restaurants, to museums, to local sporting events. NJ.com (a group website for a family of New Jersey-based newspapers, including the Star-Ledger and The Times of Trenton) offers a similar deal site that is more akin to traditional coupons.

MSNBC had the most novel approach to this discount/coupon model. Rather than carrying ads for coupons, it features a section of its website where users can see various products, from electronics, to toys, to books and many other things, compared in price at different stories and online retailers.

The page, operated jointly with PriceGrabber.com, compares the price of the item across a few sites and shows where the best deal is. 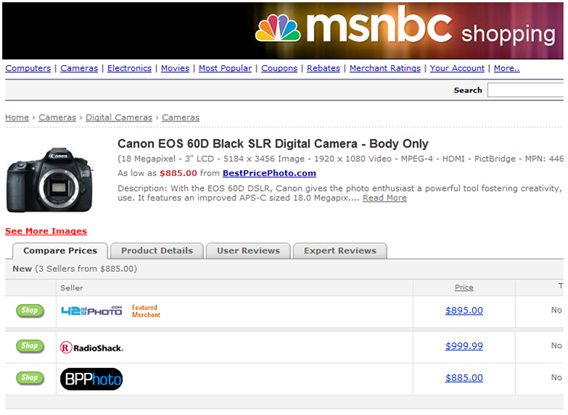 Next: Format
← Prev Page
Page1Page2Page3Page4Page5You are reading page6Page7Page8Page9Page10Page11
Next Page →

Digital Advertising and News Who is Placing Ads? The Financial Industry is the Most Prevalent Buyer of Ads on these News Websites Online-only Outlets Targeting
Use of Discount Sites/Coupons
Format Buying Digital Advertising: A Brief Overview Methodology Press Release Topline