Another major factor industry professionals consider critical in the future of digital revenue, beyond the level of targeting, is the format of a digital ad. Some in the industry have high hopes for the growth of video ads, for instance. By contrast, after a decade of the internet, some are skeptical about the future of static banner advertising, ads that include text and some kind of unanimated image such as a company logo or a photograph. The format can dramatically affect the price the news organization can charge for the ad.

Paid search is the dominant form of advertising on the Web, but it does not naturally work well with news content. (Paid search works by advertisers choosing to have their products associated with keywords. In news this is a challenge because keywords that might appear in most news headlines do not normally also associate with product advertisements.) That leaves banner ads, classifieds, video and rich media as the four main kinds of ads news sites can offer advertisers.

Banner ads, the oldest form of advertising on the internet, make up the second largest percentage of ads on the internet (24% of total online advertising revenue). Going forward, most market analysts expect banner ads will represent a smaller portion of online advertising than search, but the category is still expected to grow. For instance, eMarketer predicts that banner ads will increase from $7.6 billion in 2011 to $11.7 by 2015, a bright spot for the news online. 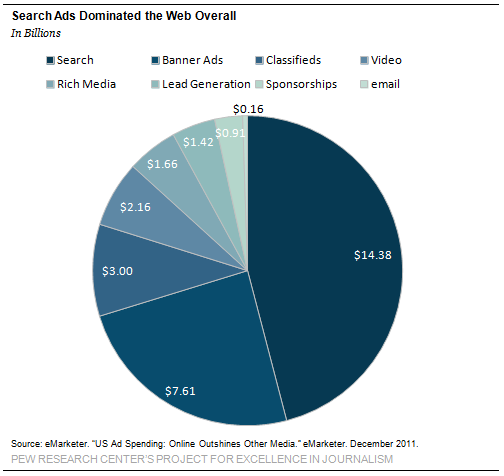 In this sample, banner ads were by far the most common kind of ad on news sites, making up 46% of all the ads on the news sites studied. 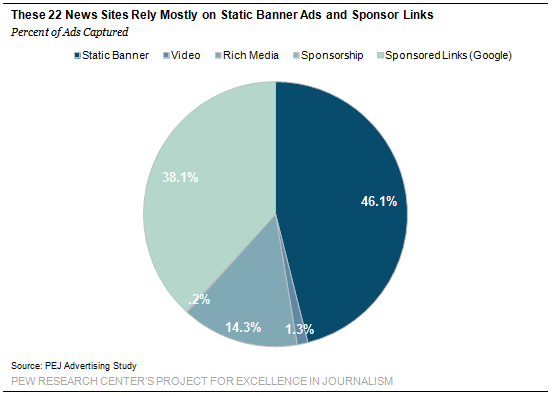 Across these 22 news sites, that same tendency toward banner ads emerged; static banner ads made up nearly half (46%) of all the ads on news websites. Some differences in the style of ads used did emerge-mostly according to the legacy media genre, though individual sites did at times stand apart from their media brethren.

Magazine websites relied on static banner ads most in this sample, where they accounted for nearly 60% of all the ads captured. Of the four magazines, The Atlantic website strayed from the use of banner ads the most. On theatlantic.com rich media ads made up almost half the ads on the site, far more than any of the other magazines.

Static banner ads were common across the newspaper sites studied. The three papers with the highest percentage of these ads were: The Wall Street Journal (100%), The Toledo Blade (78%) and the Joplin Goble (75%).

And the website of the Connecticut newspaper The Hour created more than half of its ads as rich media ads. The New York Times used rich media advertising the least, in only 12% of its advertising.

Video ads are still a relatively small part of the online ecosystem, accounting for just 7% of the total online ad market based on the first three quarters of 2011 (behind search, banner and classifieds). But online research firms expect this kind of advertising to grow rapidly. EMarketer predicts that video ads will grow 43% in 2012, by far the largest growth rate of any kind of ad. By 2015 eMarketer predicts that video ads will be $7.11 billion, the third most lucrative kind of ad behind search and banner ads.

The news sites studied here, however, featured few video ads. None of the top stories were in a video format, even on sites linked to television-based legacy media. As a consequence, there were no video ads embedded within video content (called pre- or post-roll ads by the industry). Stand-alone video ads were rare as well. They made up only 1.3% of ads on news websites studied.[1]

They were most common on cable news websites, but they still made up only 2.5% of the ads.  Video ads made up even less on Network TV sites, 1.2% on cbsnews.com and less than 1% on abcnews.com. 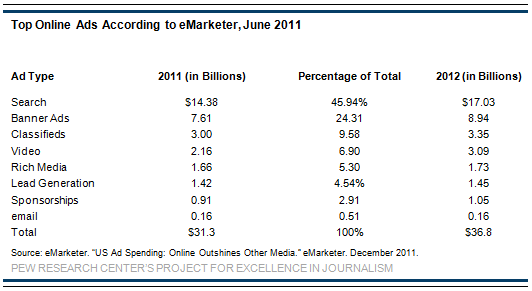 Network TV websites favored two other types of ads more than the other sectors: sponsorship and sponsored links. Sponsorship is where an article or section of a website is "brought to you by…"; these types of ads made up 13.1% of the ads on network TV websites and only 1.8% on news websites overall. Another style of ad is known as the sponsored link, which is a small, boxed-in ad that usually has between three and seven lines of text. Sponsored links made up 37% of the ads on the news sites studied-and about half (49%) of the ads on network TV sites. These ads are normally purchased through Google or through the news site itself-and are much more likely to carry the Google brand. When a news organization uses Google to power its sponsored links box, it is using the Google service and sharing the revenue from the ad with Google. If a person clicks on a link in the sponsored links box, Google shares a portion of the revenue with the news organization. Thus, even without search ads, Google’s presence can be strong.

Where does that leave the news industry? In Prof. Turow’s words, "The data point out the disjuncture between the historical nature of newspaper advertising and the direction it has taken in the digital age. It is a topic that those in the newspaper industry are probably aware of-and certainly need to be." For more on the digital advertising landscape, Professor Turow’s essay that accompanies this report provides a broader look.

Digital Advertising and News Who is Placing Ads? The Financial Industry is the Most Prevalent Buyer of Ads on these News Websites Online-only Outlets Targeting Use of Discount Sites/Coupons
Format
Buying Digital Advertising: A Brief Overview Methodology Press Release Topline