Who is buying ads on news sites? The answer reveals part of the trouble the news industry is having findings its way in the new marketplace. Across these 22 news sites, the biggest single advertiser is the news organization itself or its parent. Ads promoting the organization’s own products, known as "in-house ads" in industry terms, accounted for 21% of the online ads studied-more than any category. Most of this came from news sites tied to legacy print products-newspapers and magazines. And -they advertised primarily subscription offers for their print product. There were also occasional ads for online subscriptions (mainly for the tablet or e-reader), bundled print and digital subscriptions, and ads promoting their Facebook pages and Twitter feeds. 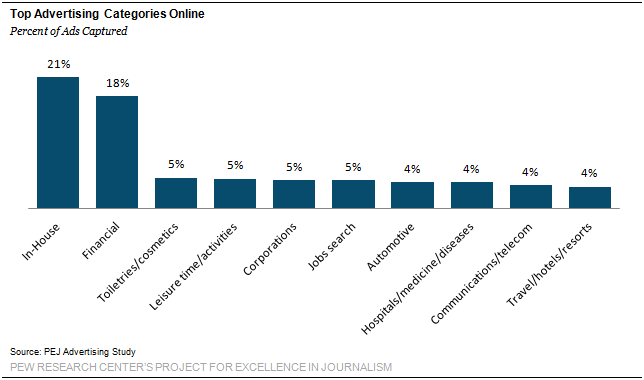 While ads from the news organization itself accounted for the greatest percentage of ads, they did not take up the most prime real-estate. Three quarters of these ads appeared on inside pages of the website that one would get to by following a link on the homepage or a link sent by a friend to a direct news story.

The magazine websites studied here (time.com, newsweek.com, economist.com and theatlantic.com) ran the largest percentage of in-house ads, fully 50% overall, from economist.com at 40.1% on the low end to time.com at 56% at the high end. In the print version of these magazines, by contrast, 10% of the ads were promoting the magazine or its company (Time magazine 11%, The Economist 13%, Newsweek 4%, and The Atlantic’s print edition contained no self-promoting ads).

Newspapers contained the second-highest level of self-referencing advertising, 21% of the Web-based ads versus 9% of their print ads. Here, though, the differences among the news organizations were greater, and those differences did not seem connected to the reach of their audience. The newspaper websites that used the most self advertising were the Wall Street Journal and the Toledo Blade (50% and 40% respectively). The Wall Street Journal, incidentally, has the longest standing and steepest paywall among any major news outlet. It has also been one of the most profitable digitally. A large part of its audience has been paying for its online product since 1997 (more than a decade before the New York Times would implement a much "softer" paywall strategy.)

On the other end of the spectrum were The Hour (a newspaper in Norwalk, Conn.) and the Arizona Republic websites. In-house or self-referencing ads made up 6% of the online ads studied. The New York Times website fell in the middle at 17%.

Self promotion ads were far less common on television websites, both network and cable. Foxnews.com carried the most, 12%, while all others were in the single digits (CNN.com 5%, MSNBC.com 3%, cbsnews.com 7% and abcnews.com 5.4%). The absence of these ads may have a lot to do with the lack of direct subscriptions in these legacy genres, as cable television "subscriptions" are paid for in bulk through the main cable provider.

For these print-related outlets, though, the heavy reliance on self-promoted ads could reflect two different factors. First, the newspaper industry still relies on its print product for the vast majority of its ad revenues. At the end of 2010 (the latest data available) fully 88% of overall newspaper revenue came from the print product versus just 12% from the Web.[1] Thus news organizations may feel the need to still push print or bundled subscriptions to their digital audiences.

Another phenomenon could be the inability of the industry to draw advertisers-and thereby ad revenue-to their online space. These ads take the place of what would ideally be revenue from outside companies interested in targeting the readers of these outlets. What the news organization gains is only the revenue generated from individuals that act on the ads by purchasing the subscription. And research shows, in general, very low rates of action from online ads.[2]

[2] Most research shows a click through rate on banner ads of below 1%; in this article from iMedia Connection  the rate is even lower at .2% or .3%. In another article about U.S. and EU click through rates from Smart Insights on "display" advertising, which is a broader term than banner ads and could include the pop up ads you see in YouTube videos, the number was about the same at .11%. What both these rates mean is that for every 1,000 ads served only 1-3 people actually click on the ad.  However, generalizing click through rates across different ad types is almost impossible. For example, a study by eMarketer and TidalV.com found that the difference across different industries (automotive, entertainment, etc.) for click through rates on video ads could be as much as 45 percentage points, making an "average" rate for video ads meaningless.

Next: The Financial Industry is the Most Prevalent Buyer of Ads on these News Websites
← Prev Page
Page1You are reading page2Page3Page4Page5Page6Page7Page8Page9Page10Page11
Next Page →

Digital Advertising and News
Who is Placing Ads?
The Financial Industry is the Most Prevalent Buyer of Ads on these News Websites Online-only Outlets Targeting Use of Discount Sites/Coupons Format Buying Digital Advertising: A Brief Overview Methodology Press Release Topline