Book reading lags behind news as an on-tablet activity among these early tablet adopters. Just 21% reported reading books at least weekly (17% daily), while 48% said they never do so. Most demographics of these users are similar to tablet users overall, except that app news users are more likely to read books on their tablet than are browser users, as are people in their 30s and 40s. The survey then probed further into book reading over the previous seven days and found most had read a book either in print or on the tablet.

About four-in-ten (41%) of the select web-based survey group had read a book on their tablet over the last seven days, but more had read a printed book, 55%. A closer look into these respondents reveals that about half of those who had read books on tablets, 46%, had also read a book in print while 54% had not.

Even though fewer are reading books on the tablet, they are reading on average for about the same amount of time as those who read in print: 3 hours and 7 minutes for tablet book reading and 3 hours and 1 minute for print books.

The biggest motivator, according to survey responses, is portability. For nearly half, 48%, this was the biggest factor in opting for tablet reading. Another 13% said just wanting to try to new technology led them there, while another 13% cited a better reading experience such as the "ability to enlarge print to allow me to read without glasses." Lower cost, in the end, was not as much of a motivator, being cited by just 10% of tablet book readers.

When asked broadly to rank which platform they find most enjoyable for book reading, the greatest percentage, 41%, said the two were equal. Just over a third, 36%, preferred the tablet (and were more heavily made up of older men) while 23% preferred print. 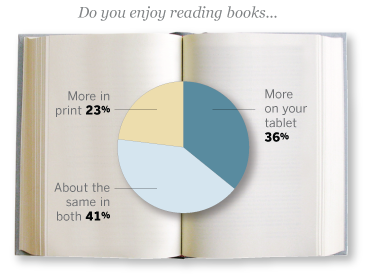 Next: Methodology
← Prev Page
Page4Page5Page6Page7Page8Page9Page10Page11You are reading page12Page13Page14
Next Page →

The Tablet Revolution Who Tablet Users Are Tablet News Users Have Strong News Habits on their Devices More Positive than Negative Assessments Overall News is Valued but Willingness to Pay is Low Apps vs. Browsers The Power User The Influence of Brand Sources for News Who Pays for News on the Tablet The Social component – Still Emerging
Book Reading – Popular both in Print and on the Tablet
Methodology Topline