HIGHLIGHTED FINDINGS IN AN INFOGRAPHIC OR SLIDESHOW

Eighteen months after the introduction of the iPad, 11% of U.S. adults now own a tablet computer of some kind. About half (53%) get news on their tablet every day, and they read long articles as well as get headlines. But a majority says they would not be willing to pay for news content on these devices, according to the most detailed study to date of tablet users and how they interact with this new technology.

The study, conducted by the Pew Research Center’s Project for Excellence in Journalism in collaboration with The Economist Group, finds that the vast majority of tablet owners-fully 77%-use their tablet every day. They spend an average of about 90 minutes on them.

Consuming news (everything from the latest headlines to in-depth articles and commentary) ranks as one of the most popular activities on the tablet, about as popular as sending and receiving email (54% email daily on their tablet), and more popular than social networking (39%), gaming (30%), reading books (17%) or watching movies and videos (13%). The only activity that people said they were more likely to do on their tablet computer daily is browse the web generally (67%).

The survey also finds that three-in-ten tablet news users (defined for this study as the 77% of all tablet users who get news at least weekly) say they now spend more time getting news than they did before they had their tablet. Just 4% say they spend less time while two-thirds (65%) spend about the same amount of time.

A third (33%) of tablet news users say they are turning to new sources for news on their tablet, sources they had not turned to on other platforms such as television or their desktop computer. And, more than four in ten (42%) say they regularly read in-depth news articles and analysis on their tablet.

Tablet news users also say they now prefer their new devices over traditional computers, print publications or television as a way both to get quick news headlines and to read long-form pieces.

Whether people will pay for content, though, still appears to be a challenge, even on the tablet. Just 14% of these tablet news users have paid directly for news content on their tablets. Another 23%, though, have a subscription to a print newspaper or magazine that they say includes digital access. Thus, the percent of these early tablet news users who have paid either directly or indirectly for news on their tablet may be closer to a third. That is a much higher number than previous research has found more broadly of people paying for digital content.

Still, a large majority of those who have not paid directly for news on their tablet remains reluctant to do so, even if that was the only way to get news from their favorite sources.

These are some of the findings of the study, which probed at three different levels the behavior of 1,159 tablet users and 894 who consume news on their tablet weekly. The study, conducted in the summer and early fall of 2011, assessed the penetration of tablets and the general activities people use their tablets for across a representative sample of the U.S. population. The study also probed deeply into how tablet users get different kinds of news and information on these devices and asked them to evaluate their experience using the device, including how that experience relates to other platforms.

One reason early tablet adopters may have integrated the devices so significantly into their daily lives is tied to the demographic profile of the tablet-owning population. In general, they are middle-age, higher-income working individuals who follow the news more closely and more frequently than the population overall.

The way these tablet users consume news, though, may surprise some. When it was launched, many observers believed that the tablet might help change the experience of news consumers and the economic ground rules of digital news consumption. That belief was based on the sense that people would consume information on tablets largely through special applications or apps that provide content from a favorite news organization like the New York Times or one’s local newspaper. Users would download the apps, which news organizations might be able to charge for, and which could make advertising more appealing.

The study reveals that, so far, while about two-thirds of tablet news users have a news app on their tablet, the browser, carried over from the desktop experience, is still the more popular means of consuming news. A plurality of tablet news users (40%) say they get their news mainly through a web browser. Another 31% use news apps and the browser equally, while fewer, 21%, get their news primarily through apps.

There may be reason for news organizations to continue to develop and promote their news apps, however. Those tablet news users who primarily use apps for news are the most avid consumers of news on tablets. They consume news more heavily, and in more different ways. They also report higher levels of enjoyment and learning from their news experience.

The study, executed by Princeton Survey Research Associates International, involved a survey of the general public and three separate surveys. The first was a general population survey. The next two surveys were conducted with a Pew Research Center panel of more than a thousand tablet users. The panel was developed through interviews with 40,000 U.S. adults. A telephone survey was conducted with 1,159 tablet users and 894 tablet news users, and a web-based survey was conducted among a select group of those news users about their news habits over the past seven days. (For more information, please see the About the Survey box below.)

Among the other major findings: 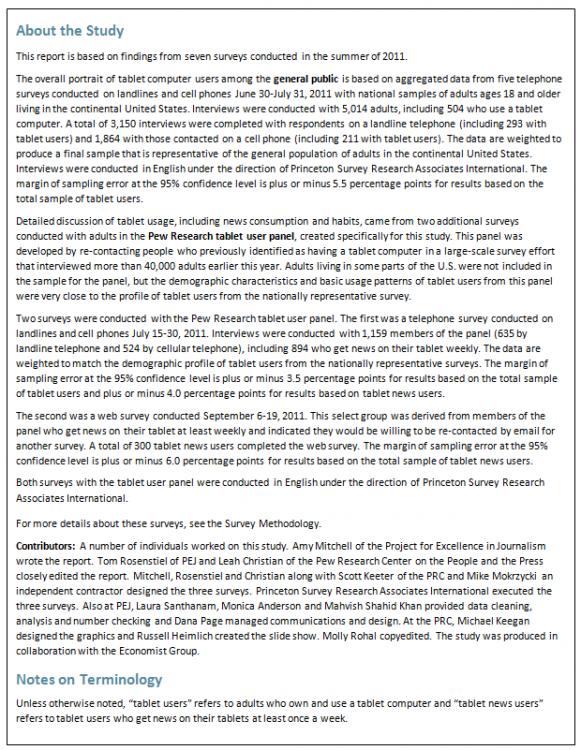 Next: Who Tablet Users Are
← Prev Page
You are reading page1Page2Page3Page4Page5Page6Page7Page8Page9Page10
Next Page →

The Tablet Revolution
How People Use Tablets and What it Means for the Future of NewsHIGHLIGHTED FINDINGS IN AN OR
Who Tablet Users Are Tablet News Users Have Strong News Habits on their Devices More Positive than Negative Assessments Overall News is Valued but Willingness to Pay is Low Apps vs. Browsers The Power User The Influence of Brand Sources for News Who Pays for News on the Tablet The Social component – Still Emerging Book Reading – Popular both in Print and on the Tablet Methodology Topline