The study also tracked the topic of each story to assess whether there was any connection between the financial backing of a site and the topics it considered newsworthy.

Across the spectrum, while certain topics tended to get more coverage than others, researchers found a relationship between the values and mission of the funder and the topics, or news agenda, covered by sites with more political orientation.

At the Watchdog.org family of sites, for instance, stories that examined the efficacy and institution of state government (as opposed to looking at any specific policies) made up nearly a quarter of the stories, followed by stories about the state economy and state politics. Indeed, those three state-oriented topics alone-economy, the institution of government and politics-accounted for more than half of all the stories studied at the Watchdog.org sites. 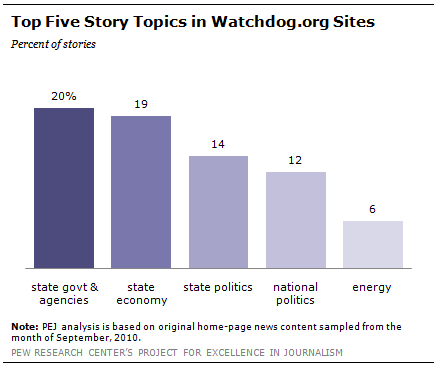 The American Independent News sites, by contrast, were more likely to cover a range of issues that are traditional priority concerns for liberals, including the environment (tied as the No. 3 topic at 7% of their stories), labor (tied as the No. 4 topic at 5%), and gay and lesbian issues (also tied for No. 4 at 5%). The economy, tied as the No. 3 topic, received half the attention it did at Watchdog.org sites. The workings of state government and state agencies did not make the top 10 list during the period studied. 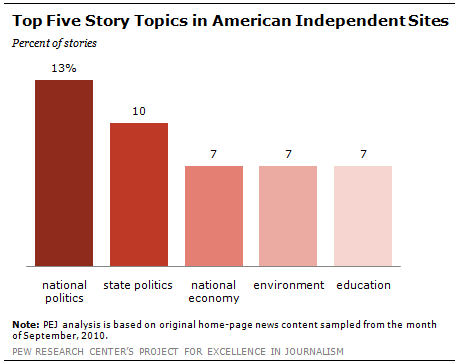 Among the consortium of Statehouse News sites, the topic priorities in some ways resembled those of the Watchdog.org sites. The workings and efficacy of state government made up one in five of the stories studied-about the same as that of the Watchdog.org sites. The third biggest topic covered was education, at 13%, a reflection of the heavy emphasis placed on this subject by the Idaho Reporter and the South-Carolina based site, The Nerve-two relatively high-output sites that made education their No. 1 topic.

If there was some regionality in the Statehouse sites, researchers saw even more of it in the individual multi-funder sites. At California Watch, for instance, immigration was a priority (its No. 5 topic at 8% of the stories studied). Texas Tribune focused somewhat heavily on drug trafficking, a border-related topic (No. 2, 11% of stories studied). And ProPublica, a national news outlet, addressed federal government in 25% of stories.

Finally, among the commercial sites studied, there were no unifying patterns in which topics the sites chose to emphasize. Out of the seven sites studied, six different topics were No. 1. These ranged from national politics (32% of stories at Sunshine State News) to celebrity scandals (12% of stories at Alaska Dispatch).

Next: Transparency
← Prev Page
Page2Page3You are reading page4Page5Page6Page7Page8Page9Page10Page11Page12
Next Page →