How widespread is the reach of these sites? Who is getting the information they report?

These are difficult questions to answer for several reasons. First, news is passed around today through many different means that elude standard measuring systems. Second, in some cases, having a smaller audience does not necessarily mean the news site is not reaching an influential one. Reaching a small but select group of decision makers can carry more weight than a large, but general, audience. Third, some news producers aim not as much at attracting a direct audience to their websites, but instead look to place their content in well-established outlets. Fourth, some of the sites here cover national affairs and thus have a wider potential audience, while others are statewide and have a smaller pool of potential users, which limits the extent to which the sites can be compared fairly. Fifth, there is no consensus method on measuring web traffic. Different analytics tools use different approaches and thus offer different results.

But a basic level of measure, web traffic, can help begin to understand the impact sites may be having on the public debate and their significance in the system of news in each state. To do this, researchers have used data from Compete.com because it makes all of its basic traffic data for all major websites available, allowing a baseline comparison of web traffic across all the sites in the study. Compete’s overall numbers tend to be lower than some others because it takes steps to correct for what it considers over counting when users clear their browser “cookies.”

While traditional news outlets still seem to dominate-in one state the top newspaper drew 40 times more web visitors than the local non-profit startup-size of audience is not always the single most important thing. And some of the sites studied still managed to generate substantial numbers, averaging hundreds of thousands of unique visitors per month, while other sites’ audiences numbered in the low thousands.

The group of commercial sites as a whole attracted the highest web traffic, according to audience measures from Compete.com, a web audience measurement company and the only available source of data on the majority of sites in this study.[1]  At the high end was The Daily Caller-a site covering national news-which averaged 553,000 unique visitors per month during the three-month period of August-October 2010. At the low end was CT News Junkie-a site covering news in a state and a small one at that-averaging about 12,000 visitors per month.

The individual multi-funder sites, though unrelated to one another in any formal sense, shared a common characteristic of relatively high web traffic-as a group, second to the commercial sites in volume. Together they averaged 95,000 unique visitors per month during the August-October period. At the high end was ProPublica, a national site, averaging 214,000 visitors, and at the low end was CT Mirror, a state-level site with a smaller potential pool of visitors, (it averaged 12,000 per month during the time period).

The American Independent News Network sites averaged an audience about half the size of multi-funder sites with an average of 49,000 unique visitors per month, according to the data from Compete. Leading among this group of sites was the Washington Independent at 162,000.

The group of sites that on the whole drew the smallest amount of traffic was the Statehouse News consortium. Together these sites averaged 6,000 unique visitors per month over the three-month period. 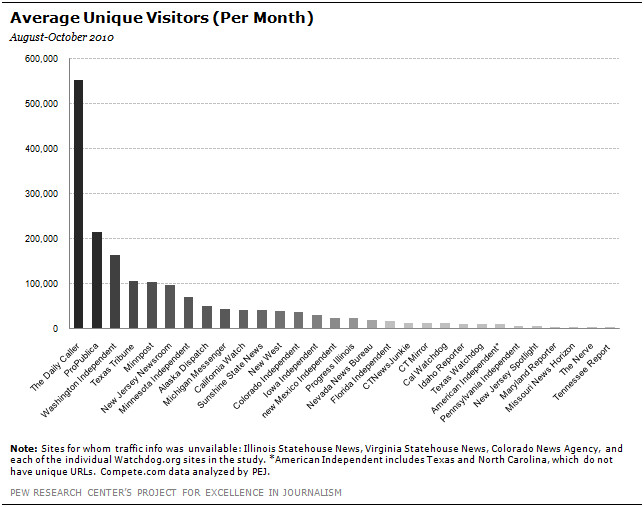 Researchers also compared unique visitors for the largest newspaper sites in states with sites in the sample. The audiences for these new non-profit and even commercial news sites were dwarfed by those of traditional media.

For instance, the Colorado Independent drew 43,000 visitors per month between August and October 2010; the Denver Post drew 1.7 million. However, in some states, the outlets in the sample showed year over year gains in traffic (August-October 2010 vs. August-October2009), while established news outlets experienced drops. In 2010, the Texas Watchdog (61% increase) and Colorado Independent (40% increase) experienced double-digit gains in traffic over 2009 levels. By the same token, the Dallas Morning News (17% drop) and the Denver Post (14% drop) experienced double-digit declines.

Traffic alone is not a measure of influence, however. 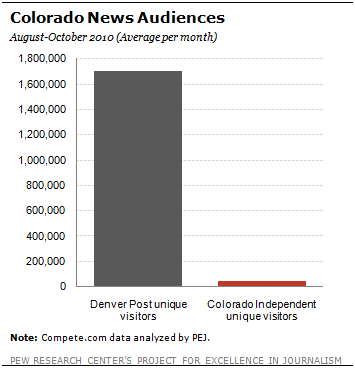 ProPublica and California Watch, for example, have each partnered with more than 70 news outlets, including the New York Times and the Washington Post, to distribute their content. Smaller operations that were part of the study also saw their content carried by other outlets, such as when an Iowa Independent story on illegal immigration was picked up by several other papers and immigration advocacy sites.

In other cases, a non-profit site was the only outlet covering an event. Indeed, many of the sites in this study claim as part of their mission a mandate to fill the void where traditional newsrooms-with their cutbacks-have had to reduce their reporting. Some have earned recognized awards for their investigative journalism. The smaller sites, staffed often by a single reporter, have gained attention too. In 2010, the New Mexico Watchdog discovered the appearance of "phantom" districts on the federal government’s economic stimulus website, recovery.gov. The outlet reported that nonexistent congressional districts were receiving stimulus money, and soon thereafter, other Watchdog.org sites in other states began reporting similar findings. The story went national, even becoming a subject on Stephen Colbert’s Comedy Central program, The Colbert Report.

[1]Compete.com monitors the clicks and browsing habits of two million member consumers, which is approximately one percent of the internet browser population. That data is extrapolated to rank the top million websites used by consumers. Its complete methodology can be found here.

Next: Navigating the News Consumer Through New Terrain
← Prev Page
Page2Page3Page4Page5Page6You are reading page7Page8Page9Page10Page11Page12
Next Page →