To get a full sense of the breadth of this new field, it was also useful to measure how much coverage these sites were offering. How much original reporting do they provide? What are their capacities, their resources for reporting the news of the day? How much could a person learn if they were to rely on this site?

To analyze this, PEJ accounted for three different levels of productivity: One was staffing, or the number of reporting and editorial personnel listed on the site. The second was the volume of original reporting, or the average number of stories each site produced in the course of a week. The third was whether a site contains a blog for opinion-based content, in addition to its news reports, and if so, roughly how often new blog posts appeared. As with ideology and productivity, researchers combined these related variables into one scale, ranging from 0-100.

Looking across all 46 sites, the productivity was strikingly low, especially as contrasted to the daily productivity of most local newspaper or television web sites, which produce dozens of new stories a day. On average the sites studied produced just eight new stories a week, but there was a wide variety on this score. The most productive sites produced around 50 stories a week. The least productive, just one. On average, the sites maintained a staff size of only three reporters and/or editors. The majority of sites did offer a blog, with 20-nearly half-typically posting more than five entries per week. 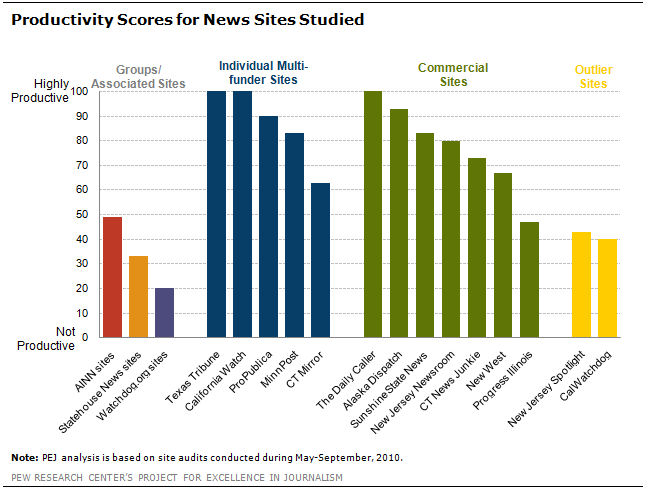 The sites with higher levels of productivity also tended to be the least ideological in their content.

The individual multi-funder sites studied tended to rank among the highest for productivity according to all measures. The most prolific, Texas Tribune, averaged 34 stories per week. MinnPost averaged 31. ProPublica, known for its long and time-consuming investigative reports, averaged 11 stories a week during the month studied. 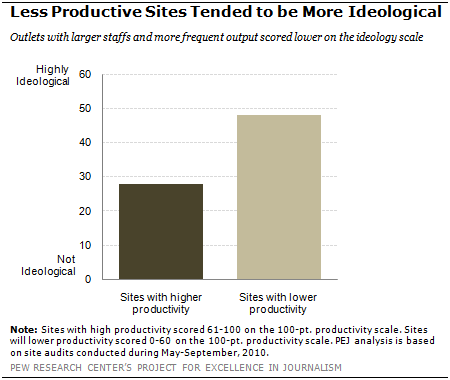 The staff sizes of these individual multi-grant sites were larger too-PEJ counted 28 editorial and reporting staff at ProPublica and 14 at California Watch.[1] No site listed less than five.

This productivity was evident not just in what could be measured quantitatively, the volume of content or the staff size, but also in the scope of the reporting as well, which ranged from data-driven and interactive elements to more traditional narrative stories. The Texas Tribune launched an interactive map of lottery sales in Texas, which visualized sales by zip code against a background of income characteristics. ProPublica, prior to the expiration of the federal bailout fund, provided a “Bailout tracker” to report on who did well and poorly under the Troubled Assets Relief Program (TARP).

The sites that ranked lowest in productivity were the members of the Watchdog.org family. Across these 12 sites, the average staff size was 1.3; they produced an average of four stories per week. What’s more, on seven of the sites, all of the news stories studied came from a single reporter. Another five sites had just two different bylined reporters for the month. And half of the sites had listed just a single staff person who seemed to play multiple roles. The small amount of content one would receive from these sites often comes from the same person.

After this analysis was conducted, the American Independent News Network changed how it organizes web content to better reflect the journalistic nature of stories that were published in its blog sections and thus not counted by PEJ. It has discontinued its blogs, and all of its content is now published in the main news channel.

Another element that stood out in this family of sites was the sharing of reporters and content amongst themselves. While the Watchdog.org sites did not share content at all-no story ever appeared on more than one Watchdog.org site during the course of the study-all nine American Independent sites shared-to some extent-reporters, and in some cases stories.

Sites that were part of the Statehouse News consortium fell somewhere in the middle of all those studied when it came to productivity. They were closer to the American Independent sites in staffing (an average of three reporters/editors) and story count (an average of eight stories in a given week). But half of the sites, six in all, offered content produced by only one or two people.

The commercial sites, though unrelated to each other and ranging fairly widely in productivity, as a rule, tended to have higher output. The sites ranged from an average of 14 stories per week during the time studied (New West) to 49 stories per week (The Daily Caller). Staff size ranged from two to 15.

[1]These staffing figures were tallied in late 2010; since then, the numbers may have changed. ProPublica, for instance, states that it is staffed by 34 journalists today.

Next: What is the Impact?
← Prev Page
Page2Page3Page4Page5You are reading page6Page7Page8Page9Page10Page11Page12
Next Page →