Assessing a New Landscape in Journalism

A new phenomenon has emerged in journalism in recent years-the era of non-profit news.

As traditional newsrooms have shrunk, a group of institutions and funders motivated by something other than profit are entering the journalism arena. This distinguishes them from the commercial news institutions that dominated the 20th century, whose primary sources of revenue-advertising and circulation-were self-evident. 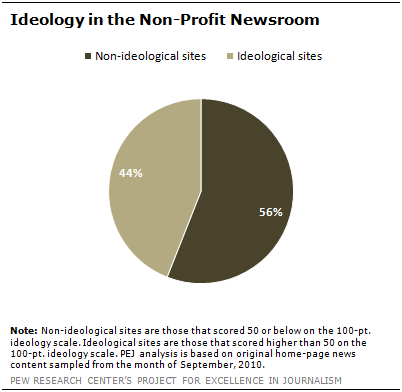 Who are these new players in journalism? Are these sites delivering, as they generally purport to be, independent and disinterested news reporting? Or are some of them more political and ideological in their reporting? How can audiences assess this for themselves? In short, what role are these operations playing in the changing ecosystem of news?

A new study by the Pew Research Center’s Project for Excellence in Journalism offers a detailed look at a portion of this new cohort of news providers-sites that cover state and national news. The study examines some four dozen sites across the country, all of them launched in 2005 or later, that offer coverage beyond the local level to state and national news. That group includes national news sites such as Pulitzer Prize-winning ProPublica, which receives money from more than a dozen foundations and has a staff of more than 30.[1] It also includes lesser-known news sites such asMissouri News Horizon, whose funding is less clear and covers Missouri state government with a staff of three journalists. The study analyzes the funding, transparency and organizational structure of these sites, and also the nature of their news coverage. [2]

(There is a larger universe of community-level non-profit news operations perhaps even more diverse in nature. That group is beyond the scope of this analysis, but does bear further study.)

• Interact with the data
• Read the consumer guide

The 46 national and state-level news sites examined-a group that included seven new commercial sites with similar missions-offered a wide range of styles and approaches, but roughly half, the study found, produced news coverage that was clearly ideological in nature.

In general, the more ideological sites tended to be funded mostly or entirely by one parent organization-though that parent group may have various contributors. They tended to be less transparent about who they are and where their funding comes from. And they tended to produce less content-in some cases generating one or two stories per week produced by a single staffer.

Sites that offered a mixed or balanced political perspective, on the other hand, tended to have multiple funders, more revenue streams, more transparency and more content with a deeper bench of reporters. The six most transparent sites studied, for instance, were among the most balanced in the news they produced.

In terms of reach, the most popular site in the study, The Daily Caller, is a commercial enterprise with a clear ideological orientation. Of the non-profit sites, it is harder to generalize. One of the most popular sites in the study was the Washington Independent, a liberal site, but it has since ceased publication.[3] In many other cases, sites with more balanced coverage, such as ProPublica and the Texas Tribune, are among the most trafficked in the sample.

These are among the findings of the study, which examined 46 news websites and an additional 68 institutions and individuals that provide the primary financial support for those sites. Researchers analyzed a total of 1,203 stories sampled from the month of September 2010 and conducted an audit of the sites and their chief supporters between the months of May 2010 and September 2010.

The non-profit sites studied, 39 in all, fell naturally into three basic types based on the nature of their funding and the level of independence of their organizations. There were Group Sites, those that were part of formal families organized by a single parent or funder. There were Associated Sites, those that shared content with each other but otherwise operated independently and for the most part had different funders from one another. There were Individual Multi-Funder Sites, which each had multiple funding sources and revenue streams and operated entirely independently. In addition, there were sevenCommercial Sites that fit all the other criteria of the study except that they operated as for-profit concerns, and as such offered a basis of comparison. (There were also two sites that were Outliers in that they were independent sites but had a few funders, and thus did not fit the categories above.)

This study is a first attempt to empirically evaluate a new sphere in journalism, but it is only a beginning and only a part of that sphere. Inevitably, studies such as these are snapshots in time. Two of the outlets studied have folded since our research took place: the Washington Independent and North Carolina Independent News. Others may have emerged since the audit was conducted. In addition, some of the sites included in this analysis, as they develop and try to achieve more credibility, may become more transparent about their patrons and perhaps more even-handed in their coverage. Some sites may have adopted new sources of funding or shed old ones.

The study finds that the fact that a news site is a non-profit does not define what kind of news it produces. Some fit squarely into the traditions of independent news gathering, which dictates offering a wide range of perspectives and ideas about current events. Others fall more closely toward what might be considered partisan news or even political activism.

Certainly consumers can find partisan content in traditional commercial media as well, increasingly so as the range of outlets has grown in the digital age. But those commercial sites, usually national in scope, often have gotten more scrutiny than many of the news operations in this study, particularly those sites offering content at the state level. Many of the sites examined here, moreover, purport that they were started precisely to fill the gap left at the state level from cutbacks in traditional media, especially newspapers, and thus present themselves as functioning much as traditional media once did.

Given that the financing of non-profit news is not self evident in the same way it is in commercial media, however, it is not so obvious where the financing for these sites comes from and what the motivations behind the financing are. This study also offers some guidance for consumers about how they can assess the nature of non-profit news sites content and the level of transparency the site has about its mission and funding.

[2]Sites formed around a single issue, like the Hechinger Report, or those comprised primarily of opinion or aggregation, such as Arkansas News, were not included because they did not fit the parameters of the study criteria. So were sites that were fundamentally local in nature, covering one community, such as Voice of San Diego, the St. Louis Beacon, or the Bay Citizen. Also excluded were sites that produce on average less than one original story per week. Finally, news outlets that met the requirements of the sample, but were launched earlier than 2005, also were not included; among these are the Center for Public Integrity, a pioneer of the non-profit journalism model, founded in 1990. See About the Study for more on the parameters of the sample.

[3]In a November 2010 note to readers, editor Aaron Wiener explained that as foundation support began to dry up in the midst of economic recession, The Washington Independent’s expenses were unsustainable, and its parent, the American Independent News Network, ended publication.

Next: Assessing the Field of Non-Profit News
← Prev Page
You are reading page1Page2Page3Page4Page5Page6Page7Page8Page9Page10
Next Page →