In all, less than 1% of the coverage of the economic crisis was related in some significant way to African Americans. This came despite the media devoting more attention to the economy than any other story during the time period studied. From February 2009 to February 2010, the economic crisis accounted for 21.1% of all news coverage. 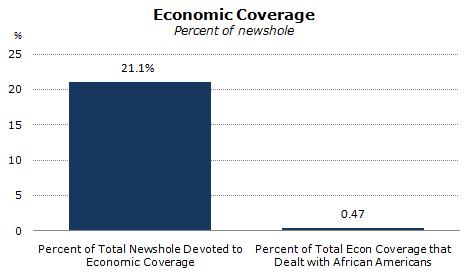 The New York Times on December 1, 2009, for example, ran an article about the growth of the race gap in hiring and employment during the recession, even among those with college degrees.  The article focused on several African Americans looking for jobs, including a 37-year old, Barry Jabbar Sykes, who has a degree from the historically black Morehouse College.  Sykes uses the first name “Barry” on job applications even though he has gone by Jabbar his whole life because he thinks it will give him a leg up in hiring.  “Barry sounds like I could be from Ireland,” Sykes said.

Other stories were about African Americans who had sub-prime mortgages or who confronted discrimination in the mortgage process and the NAACP suing Wells Fargo and HSBC for institutionalism racism.

A July 20, 2009 Anderson Cooper 360 package investigated racism in the health care industry, bringing to light “two systems” in New York City: those privately insured compared with those on Medicaid.  There was a focus on how blacks faced this unfairness disproportionately to whites.  In addition, a June 9, 2009 ABC News headline radio story covered black, Latino and Asian lawmakers seeking to call attention to disparities in medical treatment in poor areas.

Next: The Lives of African Americans in the U.S.
← Prev Page
Page1Page2Page3Page4Page5You are reading page6Page7Page8Page9Page10Page11
Next Page →