Who were the people who made news that related to African Americans?

PEJ tracks who is a lead newsmaker in every story. To qualify as a lead newsmaker, someone must be related to at least 50% of the story in space or time.  The lead newsmakers in stories that were predominantly about African Americans were primarily those who were involved in the major stories of the year, with Barack Obama taking the lead.

The president was the lead newsmaker in 31.7% of all African American-mention stories, more than three times any other figure. 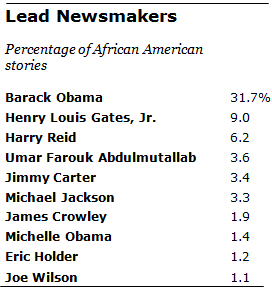 The second leading newsmaker was Henry Louis Gates, Jr., himself, featured in 9% of all stories in which African Americans were mentioned prominently.

The third lead newsmaker with recurring references to African Americans was Harry Reid, with 6.2% of stories because of a January 2010 apology for his comment that Obama could win the presidency because he was “light-skinned” and had “no Negro dialect, unless he wanted to have one.”

The fourth lead newsmaker was Umar Farouk Abdulmutallab, a Nigerian man who attempted to blow up a U.S. plane on Christmas Day, with 3.6% of stories.

Rounding out the top five lead newsmakers was Jimmy Carter who criticized Joe Wilson’s “you lie” statement at Obama as a racist outburst.  He was a lead newsmaker in 3.4% of the African American stories.  The sixth on the list, the late “King of Pop” Michael Jackson, represented 3.3% of stories that mentioned African Americans prominently.

Sgt. James Crowley, the policeman who arrested Gates, was mentioned in 1.9% of all African American stories.

Michelle Obama was a lead newsmaker in 1.4% of the stories that focused on African Americans. All but one of these stories was about her family ancestry and genealogy, traced in October 2009.  The one other story focused on her discussion with African American students at a school in Washington, D.C.

Attorney General Eric Holder was the lead newsmaker in 1.2% of stories about African Americans because of comments he made about race in February 2009. Congressman Joe Wilson also was in the top ten, with 1.1% of stories.