The largest single event explicitly tied to race in the way it was covered during the year was the arrest on July 16, 2009 of Gates, who was mistakenly suspected of trying to break in to his own home. Gates accused the arresting officer, who is white, of racism – and this sparked a sometimes heated national conversation about race. The debate was stoked even more as a result of public comments by Obama, a Gates friend, who said the Cambridge police “acted stupidly in arresting somebody when there was already proof that they were in their own home.” 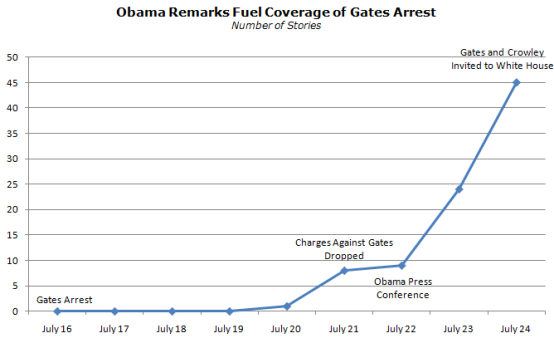 Nearly one-fifth of all coverage studied during the year relating to African Americans (19.4%) had to do with Gates’ arrest and the ensuing controversy, including Obama’s remarks. During its height, however, the Gates story was never huge. Its biggest week, according to PEJ’s News Coverage Index, was the week the story broke, July 20-26, and it occupied 11.9% of the newshole, making it the No. 3 story for that week.

The story took off in the mainstream press after Obama made comments about the arrest at one of his press conferences. Indeed, Obama, not involved at all in the initial incident, was a central newsmaker in roughly half of all African American-related Gates coverage.

In the time period studied, the Gates saga was the biggest African American storyline in all news sectors except for cable where the Obama Administration story was slightly larger.

Network morning news programs devoted the most time to the incident, as 45.2% of their African American-related coverage centered on the Gates arrest. 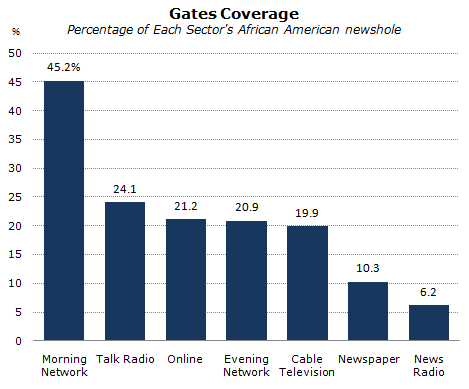 Almost a quarter, 24.1%, of talk radio programming predominantly about African Americans was devoted to the Gates incident.

Online news filled 21.2% of its African American newshole with stories about the Gates arrest. On evening network news, the story filled 20.9% of the newshole.

On cable, that was true of 19.9% of its African American-related coverage, second only to the Obama Administration at 25.9%.

The storyline accounted for 10.3% of the African American coverage on newspaper front pages. More coverage could be found in the opinion pages of newspapers, but the front-pages considered a wide range of other African American related themes. [1]

What sort of African American angle emerged in the coverage of the Gates incident? Was there an attempt to discuss the black population more broadly, or did the media stay focused on the individuals directly involved?

To a certain degree, this varied according to each media sector.

Cable news and network morning television in particular focused on the aftermath, often bringing in pundits or other outsiders for discussion. But, even using some of the same sources, there was a distinct difference in the image that emerged from each of the two sectors. Morning news segments, usually a brief packaged piece followed by a discussion with two or more guests, tended to be more symbiotic, with the guests often voicing agreement over the issues at hand and offering a positive sense of how things could move forward.

For example, on the July 23, 2009 Today Show, NBC’s Matt Lauer interviewed Michael Eric Dyson, an author (and common interviewee across the media sectors), and Michel Smerconish, also an author and a radio host.  Although the two men disagreed, they acknowledged each others’ points of view, and never interrupted each other.

And on the July 24, 2009 Early Show on CBS, correspondent Harry Smith interviewed Professor Gates’ daughter Elizabeth, a writer for DailyBeast.com, along with the mayor of Cambridge, Massachusetts, Denise Simmons.  The two women remained very cordial throughout, with Gates even praising the other interviewee’s words, “As the mayor just eloquently stated, my father has said that he’ll participate in whatever the next step must be.”

As the case went on, the coverage followed the same pattern, although the topic evolved.  On a July 28, 2009 Early Show, after airing the taped recording of the 911 call, Harry Smith interviewed the Rev. Jesse Jackson about the debacle.  Smith asked Jackson about the upcoming “beer summit” between Obama, Gates and Officer James Crowley and whether the men could find common ground; he also noted the feel-good mood after Obama was elected and asked whether the U.S. could ever be a color blind country.

Jackson responded that, “No one desires to be blind. We should be conscious…and we should be caring. I think the real deal here is that we do not have an explosive situation. President Obama has tried to reduce the temperature in the Doctor Gates and Crowley case.”

On talk radio, the tenor was quite different.  Most of the coverage in this sector came from the conservative talk show hosts. Liberal host Ed Schultz did not spend any significant time on this story. Another liberal talker, Randi Rhodes, devoted two segments to the arrest.

Since right wing talkers were most likely to talk about the issue, it is not surprising that most of the radio talk show coverage strongly critiqued Obama’s response to the Gates arrest.

On Rush Limbaugh’s July 23, 2009 show, the radio host said that “the president’s reaction to this was not presidential…We got the militant black reaction, the Cornel West angry reaction.  Basically we saw a community organizer in action last night, and he sends a message to young people all over the country that cops are stupid.  The President of the United States says the police act stupidly…Obama is not a force for positive race relations in this country.  He is not a uniter.  He played into stereotypes with this, and he repeats them.  He [should have] kept his mouth shut.”

Also on July 23, Michael Savage called Obama a “jive artist” and said his and Gates’ actions were anti-police.

Sean Hannity also blasted Obama in his radio show July 24, 2009 for saying that the cops acted “stupidly.”  He demanded that Obama apologize to Crowley.

Much of the internet news coverage was made up of wire stories that followed the same trajectory of the case that the other outlets followed.  Although there was some analysis, most coverage described the events of the case, Obama’s comments, the 911 call and the subsequent beer summit.

A July 21, 2009 Associated Press story published on AOL News explained that “supporters say Gates was the victim of racial profiling” and then went into a detailed account of the events that led up to the arrest.  The article also pulled in quotes from several prominent African Americans including the Rev. Al Sharpton and some of Gates’ colleagues.

Network evening news produced the most enterprising pieces, looking beyond the political issue at hand to broader racial implications. CBS Evening News aired a July 23, 2009 story on the recent history of clashes between African Americans and law enforcement.  A day later, ABC’s World News Tonight aired a report on the same issue.

On July 23, 2009, PBS’ NewsHour aired a package about the incident and then Ray Suarez interviewed Antwi Akom, a professor of urban education and Joseph Thomas, Jr., the African American chief of police for Southfield, Michigan and an adjunct professor of political science. In this rather formal, polite interview, the three men focused on the problem of racial profiling as opposed to focusing solely on the Gates incident.  The tenor of the discussion reflected much of the coverage seen in the African American press about the incident.

Cable news attention was similarly focused on political implications, though here both sides of the aisle weighed in strongly. On cable news, particularly evening prime time, the tone was quite different. These programs fixated more on the political implications. Here, debate and disagreement came from both the guests and the hosts themselves. 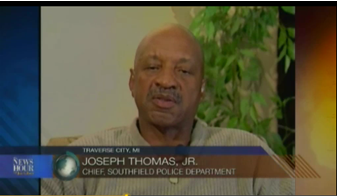 On the O’Reilly Factor’s July 23, 2009 show, for example, sit-in host Monica Crowley repeatedly criticized Obama for weighing in on the matter at all. “We weren’t there, we don’t know what happened, but neither does the president.  So why is he taking sides in the case of a Harvard professor accusing a local cop of racism?”

CNN in some ways benefited from timing as the Gates arrest occurred shortly before the premiere of the Black in America 2 series.  Several African American guests were already scheduled to appear on the various prime time programs.  The conversation quickly turned to the Gates affairs, with heated remarks and exchanges among the guests. Wolf Blitzer on The Situation Room, for example, aired a live interview with African American comedian D.L. Hughley and an African American radio host, Bev Smith.

Smith was incensed about Gates’ arrest and racism overall.

Blitzer’s interview touched more on race relations than most other coverage of the arrest, asking the guests if they had ever been racially profiled and if the situation for African Americans was getting better – to which Smith’s quick response was that it was “absolutely not.”

Newspapers, at least on their front pages, stuck more to the events as they unfolded. The Washington Post, for example, had a front page story on July 22, 2009 about the arrest.  The Post interviewed Gates, who said that the arrest will lead him to “turn his intellectual heft and stature to the issue of racial profiling.”

One area of commonality across media sectors came in the black voices they brought into the coverage. Most interviewed a mix of African Americans not tied to the case in any way but who were academics, political analysts and black activists, who could speak personally as a voice from the African American populace. Some of the most prominent voices included conservative Bob Parks and liberal Earl Ofari Hutchinson, American political science professor, Melissa Harris-Lacewell, Reverend Jesse Jackson and political analyst Donna Brazile.

1. PEJ codes only the front page of newspapers and the continuation of these stories for the News Coverage Index.

Next: The Obama Administration
← Prev Page
Page1Page2Page3You are reading page4Page5Page6Page7Page8Page9Page10Page11
Next Page →