Add in coverage of the Gates incident involving the president and that number rises to almost a 30% of all African American coverage. [1]

Looked at another way, how large a component was race in the press’ treatment of the Obama presidency? In all, race-related themes were present in 9% of all Obama Administration coverage.

Nor did the media generally use his presence as a news hook or basis for examining the state of Black America during his first year in office. Instead, the attention, like other African American coverage, tended to be triggered by specific news events. In this case, two such incidents stood out with roughly equal parts of the coverage: an outburst by Rep. Joe Wilson (R-SC) at a September presidential address to a joint session of Congress and Sen. Harry Reid’s January 2010 apology about comments he made about Obama’s skin color.

During the presidential address, a forum for the president to outline his new health care reform proposal, Rep. Wilson shouted “You lie!” when Obama said the plan would not provide health insurance to illegal immigrants. 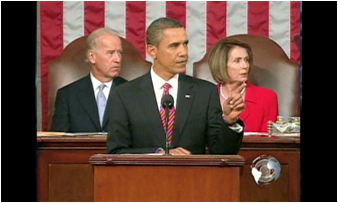 Wilson’s exclamation itself did not mention race, but several observers and commentators asserted that race lay at its core.  Most prominent among these was former president Jimmy Carter, who told a town hall meeting in Atlanta that he thought Wilson’s comment was “based in racism.” Carter continued, “There is an inherent feeling among many in this country that an African American should not be president.”  One day later, he also said in a speech at Emory University that the heavy anti-health-care-reform vitriol of the summer town hall meetings were fueled with racism.

Carter’s response to Wilson’s quote received extensive attention in the media but still did not bring out a much deeper discussion of racism in America.  Instead, the coverage was focused on the words of Wilson and Carter.

While front page coverage tended to provide balanced coverage of the issue, cable news shows weighed in with their own – often alternative – opinions.

On his September 16, 2009 radio show, conservative Sean Hannity said that disparaging Obama’s critics as being racist was a “clearly orchestrated campaign” by the Obama Administration and on his September 18, 2009 cable television show, the anchor tied Carter’s comments with Nancy Pelosi’s concerns about violence, calling them desperate scare tactics.

A September 22, 2009 Good Morning America piece interviewed Bill Clinton about Carter’s statement about racism, but the conversation turned more to opposition to health care reform legislation than about racism.  Later that day, Keith Olbermann discussed Clinton and Carter’s differing opinions on racism on his Countdown show. 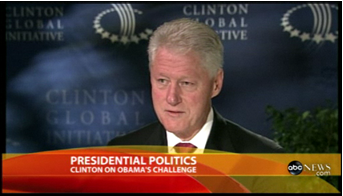 Others argued the claims of racism were unfounded and even politically motivated.  On a September 17 show, Fox’s Sean Hannity said that Democrats were trying to silence their critics by “defining conservatism as racism.” And the Fox Report With Shepard Smith turned to Joe Wilson’s son, saying there is “not a racist bone” in his dad’s body.

Obama himself downplayed the situation. He said he thought dislike of government was a bigger factor in criticisms of his presidency than racism. He also deflected the topic with humor: when asked in an interview on the Late Show with David Letterman about whether there was basis to Carter’s charges of racism, Obama quipped, “Well, first of all, I think it’s important to realize that I was actually black before the election.”

Four months later, another assertion with racial angles elicited heavy media attention. This one came in published form and, while lasting just three days in the media spotlight, accounted for most of the remainder of the coverage of Obama explicitly tied to race. Mark Halperin and John Heilemann’s book, Game Change, released January 2010, quoted Sen. Harry Reid as saying that Obama could win the presidency because he was “light-skinned” and had “no Negro dialect, unless he wanted to have one.”  When the quote hit the media, Reid made a public apology as well as a phone call to the president.

Obama accepted his apology, but not before the story grabbed media attention – particularly among cable and radio talk programs, which again focused almost solely on evaluating the actions of the two individuals (Reid and Obama) rather than taking a larger focus on how African Americans might respond to such a remark. And the evaluations came largely along party lines as Rush Limbaugh, on his January 11 radio show, pronounced Reid’s apology to be fake, while MSNBC’s Chris Matthews claimed it to be sincere.

One other race-related accusation of the president came from within the media itself.  Fox News personality Glenn Beck pronounced on July 28, 2009 that Obama “hates white people,” prompting discussions across the media about public attitudes toward the first African American president.

From there, cable channels aired responses to Beck’s statement. On MSNBC’s July 29, 2009 Hardball, Chris Matthews interviewed Kweisi Mfume, former congressman and president of the NAACP, and Joan Walsh from Salon.
Mfume said, “Glenn Beck owes the president an apology.  He owes the American people an apology.  This is an insult to our democracy, our way of life.  It’s divisive.  It’s throwing out race and trying to find a way to divide people.”

When Matthews asked Walsh if Beck’s statement was intended to “de-Americanize” the president, Walsh said, “I do.  I think it’s related.  It’s all an attempt to dehumanize him and to delegitimize him in a very deep way.”

Next: The Economy and Health Care Crisis
← Prev Page
Page1Page2Page3Page4You are reading page5Page6Page7Page8Page9Page10Page11
Next Page →