Social media use has grown rapidly over the last decade. Today, Americans use a range of social media sites and are increasingly turning to these platforms to get news and information. Social networking sites have also emerged as a key venue for political debate and discussion and at times a place to engage in civic-related activities.

One of the most prominent recent examples is the role social media has played in the emergence of the “Me Too” movement aimed at raising awareness around sexual harassment and assault. And July 2018 marks the fifth anniversary of the use of the #BlackLivesMatter hashtag, one of the most sustained efforts during this time to bring attention to a cause using social media platforms. In light of these and other debates about the impact of social media, the Center fielded a survey to assess the current state of Americans’ experiences with and views related to political engagement on social media. 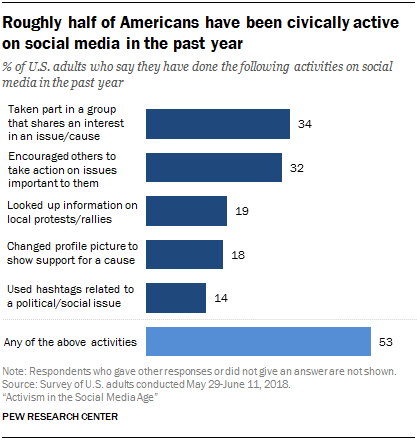 There are a number of ways Americans can be politically active on social media. This survey asked about five specific actions people may take on these sites and finds that some activities are more common than others.

In the past year, 34% of Americans have taken part in a group on social media that shares an interest in an issue or cause, while a similar share (32%) says they have encouraged others to take action on an issue that is important to them. Smaller shares have used these platforms recently to find information about rallies or protests happening in their area, change their profile picture to show their support for a cause, or use hashtags related to a political or social issue. Taken together, 53% of U.S. adults have engaged in at least one of these activities on social media in the last year.

Democrats are more likely than Republicans to report participating in many of these activities recently on social media. Most notably, Democrats are more than twice as likely as Republicans (by a 24% to 9% margin) to say they have used social media in the past year to look up information about rallies or protests happening in their area. However, notable shares of Americans belonging to each party have done some sort of politically related activity on social media recently: 59% of Democrats have performed at least one of these five activities the Center measured, as have 45% of Republicans.

Engagement in these activities also varies by age: Americans ages 18 to 49 are more likely than those ages 50 and up to have recently changed their profile picture to show support for a cause (23% vs. 13%), looked for information on social media about rallies or protests in their area (24% vs. 13%), or used hashtags related to a political or social issue (20% vs. 8%). There are, however, more modest and less consistent differences in performing these actions by race and ethnicity or by gender. (For details on political and demographic differences, see Appendix A.) 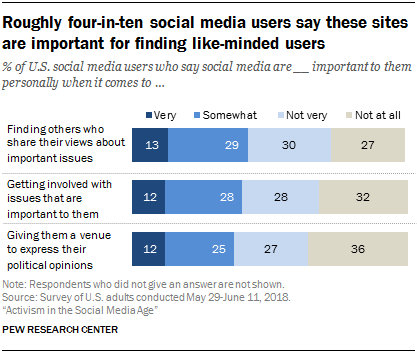 When asked how important social media is to them personally as a venue for political and civic engagement, only a minority of social media users describe these sites as personally important. But blacks and Hispanics are especially likely to value these sites for helping them vocalize their opinions or get involved with issues that are important to them. 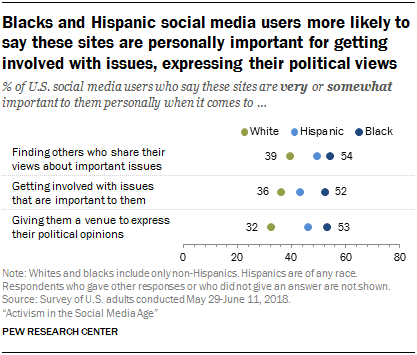 But these attitudes tend to vary widely by racial or ethnic groups.3 For instance, black social media users are more likely than whites to say these sites are very or somewhat important to them for finding others who share their views about important issues (54% vs. 39%), for getting involved with issues that are important to them (52% vs. 36%), or for giving them a venue to express their political opinions (53% vs. 32%).4

Beyond differences by race or ethnicity, Democrats who use social media are somewhat more likely than Republicans to say that social media are important for allowing them to find others who share their views (50% vs. 39%), getting involved with issues that are important to them (49% vs. 34%), and giving them a space to share their political views (43% vs. 33%). (For details on political differences, see Appendix A.) 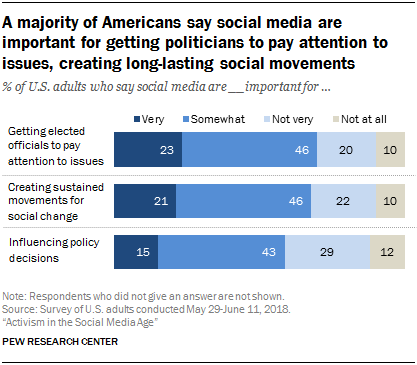 As noted above, assessments of the importance of these platforms for one’s own personal political engagement tend to vary by race and ethnicity. But the public as a whole has positive impressions of the ability of social media to help enact sustainable political change.

There are generally modest differences related to political affiliation when it comes to the role of social media in getting elected officials to pay attention to issues or influencing policy decisions. However, a substantially larger share of Democrats (80%) than Republicans (53%) say these platforms are important for creating sustained movements for social change.

About two-thirds of Americans think social media help give a voice to underrepresented groups, but a larger share thinks they distract people from more important issues 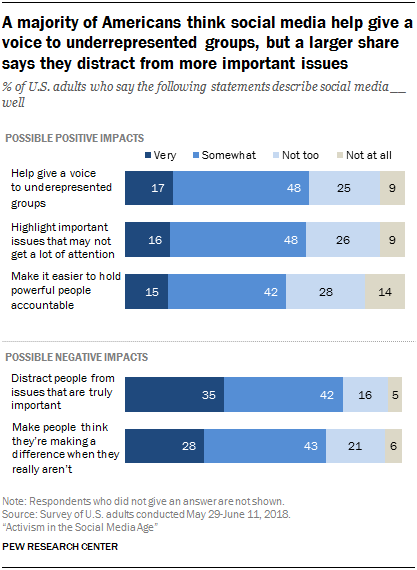 Americans describe a mix of both positive and negative effects when asked about some of the broader impacts of using social media for political and civic engagement. On the more positive side, 65% of U.S. adults feel that the statement “social media highlight important issues that might not get a lot of attention otherwise” describes these platforms very or somewhat well. A similar share feels these platforms help give a voice to underrepresented groups, while 56% believe the statement “social media make it easier to hold powerful people accountable for their actions” describes these sites well. At the same time, relatively modest shares of Americans (in each case, fewer than one-in-five) believe these positive statements describe social media “very well.” 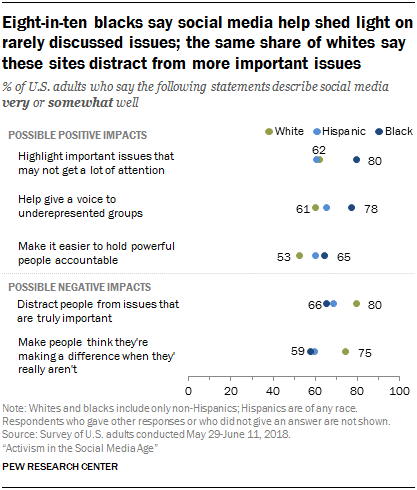 Blacks are especially likely to think social media magnify issues that are not usually discussed in other venues. Fully 80% of blacks say the statement “social media highlight important issues that might not get a lot of attention otherwise” describes these sites well, including 31% who say this describes these sites very well – smaller shares of whites and Hispanics say the same. A similar pattern is true when asked whether social media help give a voice to underrepresented groups: Blacks are again more likely than whites or Hispanics to say this is an apt description of these platforms.

There are also racial and ethnic differences around the idea that social media make it easier to hold powerful people accountable for their actions – with blacks and Hispanics being more likely to agree with this compared to whites. Whites, on the other hand, are more likely than either blacks or Hispanics to assert that social media distracts people from issues that are truly important or that these sites make people believe they are making a difference when they really are not. Still roughly half or more of each racial or ethnic group offer up both positive and negative critiques on social media’s impact and influence on these activities.

Along with these differences by race and ethnicity, larger shares of Democrats say that social media give a voice to underrepresented groups, highlight important issues that may not get a lot of attention, and make it easier to hold people in power accountable for their actions compared with either Republicans or political independents. But there are fewer partisan differences when assessing the potentially negative impacts of online activism. (For details on political differences, see Appendix A.)

Next: 2. An analysis of #BlackLivesMatter and other Twitter hashtags related to political or social issues
← Prev Page
Page1You are reading page2Page3Page4Page5Page6
Next Page →

Activism in the Social Media Age
1. Public attitudes toward political engagement on social media
2. An analysis of #BlackLivesMatter and other Twitter hashtags related to political or social issues Acknowledgments Methodology Appendix A: Detailed tables