The older adult population in the United States and in many other countries around the globe is expected to increase substantially in the coming decades. The Bureau of Labor Statistics estimates that more than 800,000 new home health and personal care aides will be needed between 2014 and 2024 alone, in large part to cope with the health demands of this aging population. Yet the nature of these jobs – which often involve heavy physical demands and risk of injury, while providing relatively low wages and benefits – makes them difficult to fill and has led to concerns about an ongoing shortage in paid caregivers.

Survey respondents were asked to read and respond to the following scenario: “Today, many older adults move into assisted living facilities when they can no longer live independently. In the future, people could be provided with a robot caregiver that would allow them to continue living in their own home as they age. This robot would be available 24 hours a day to help with household chores, test vital signs and dispense medication, or call for assistance in an emergency. It would also have conversational skills and could serve as a companion for people who live alone.”

For some, robots and various automation technologies that can care for older adults offer a potential solution to this shortage of human workers. The survey sought to examine Americans’ attitudes toward this type of automation using the concept (highlighted in the accompanying box) of a robot caregiver that can live with older adults and perform all of the functions of a human health worker. It finds that most Americans have heard little if anything about efforts to develop caregiver robots, but that a majority finds the concept realistic. As with many of the concepts measured in this survey, they express a mixture of worry and enthusiasm and anticipate a mix of positive as well as negative impacts. Most prominently, they expect that this type of technology would reduce the worry that young people feel about caring for aging relatives and help older adults be more independent, even as they express concerns that older adults would feel more isolated in the process.

Most Americans are unaware of efforts to develop robot caregivers for the elderly, and the public reaction is a mix of worry and enthusiasm 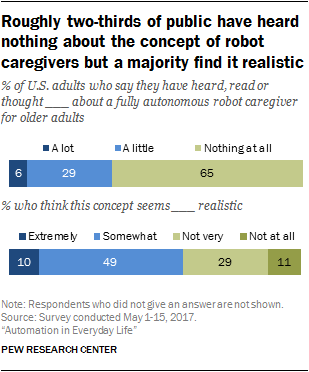 A majority of Americans are unfamiliar with efforts to develop robot caregivers for the elderly: 65% say they have heard nothing at all about this topic, and only 6% have heard a lot about it. Although fewer than half of Americans are aware of the effort to develop robot caregivers, a majority (59%) view them as a realistic prospect – with 10% describing this concept as extremely realistic. 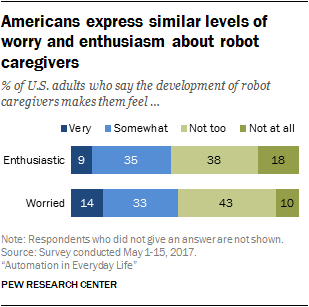 The concept of robot caregivers elicits a nearly equal mix of worry and enthusiasm: 44% of Americans are at least somewhat enthusiastic about this development, while 47% express some level of worry. Older adults express somewhat lower levels of enthusiasm about this concept relative to other Americans: 38% of adults ages 50 and up say they are enthusiastic about the prospect of a robot caregiver, compared with 49% of 18- to 49-year-olds. 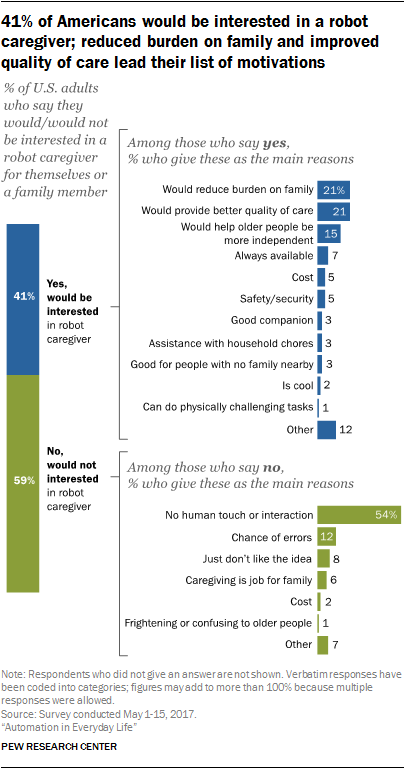 Americans who would like to use this type of robot caregiver mention a number of different motivations. Around one-in-five (21%) feel that a robot caregiver would provide a better quality of care than is available today, especially in comparison to paid human caregivers:

“A robot would never fatigue, would never get emotional or angry. They have no ego, they would just care for the individual.”
– 43-year-old woman

“I used to work in nursing homes and assisted livings. Human caregivers are often underpaid and overworked. Humans have bias, and if they don’t like a patient that affects their care.”
– 28-year-old woman

“It would give dedicated, reliable care – whereas family members often have jobs and other obligations that keep them from being able to serve as around-the-clock caregivers. It also takes away the uncertainty of a stranger coming in and you not knowing what kind of care your family member may get.”
– 38-year-old woman

Meanwhile, 15% of these respondents feel that this type of robot would help older adults be more independent and remain in their homes for a longer period of time:

“A caregiver of this type would have allowed my family to leave my mother in her home and not have her move into an assisted living facility. A robot would have provided the assistance she needed while allowing her to have privacy in her home.”
– 57-year-old woman

“Anything that promotes the independence of the elderly individual may be useful in a society where the extended family is increasingly distant or separate.”
– 46-year-old woman

“Long term care is very expensive and most nursing homes are not where older people want to be. People like to stay in their own homes.”
– 68-year-old woman

Another 8% of these respondents like the fact that this type of robot caregiver would always be available in the event of an emergency, while 5% each feel it would offer a cost savings compared with traditional forms of caregiving, or that it would give older adults a feeling of safety or security.

Meanwhile, Americans who would not be interested in a robot caregiver overwhelmingly mention one concept over all others: namely, that trusting their loved ones to a machine would cause them to lose out on an element of human touch or compassion that can never be replicated by a robot. Roughly half (54%) of these respondents mention this concept in one form or another:

“Human contact is vital. A robot cannot provide the personal chemistry, empathy, and meaningful relationship that a human can, especially to someone in physical and emotional need.”
– 47-year-old woman

“There is something inherently good and beneficial for human-to-human interaction, rather than human to robot interaction. Empathy is a big component.”
– 33-year-old man

“We need to guard against increasing the lack of one-on-one interactions. As a retired person I am aware of the growing isolation with automated phone systems, checkout lanes, online shopping, as well as incessant robocalls causing us to avoid answering a ringing phone!!!”
– 71-year-old woman

“There is a difference between care, and caring!”
– 70-year-old man

Roughly one-in-ten respondents in this group (12%) are concerned about the chance that robots might make a mistake in caring for their loved ones, and another 6% argue that caregiving is a job for family and loved ones and should not be outsourced to a machine:

“It would depend on how reliable the robot is. The main problem with the elderly is that they get confused. If the robot malfunctions, an elderly person would not be able to manage that situation adequately.”
– 48-year-old woman

“Personally I want human interaction as opposed to some robot. They can fail or short circuit at any time and then where would I be? In trouble, that’s for sure.”
– 44-year-old woman

“Societies and families should care for each other, not robots. To expect a robot to offer the same level of care and comfort that a friend or family member could doesn’t seem realistic. Can a robot give hugs, reminisce about life events, and care for the emotional health of a person?”

“Family needs to be taken care of by family. It’s part of our responsibility.”

In terms of the broader impact of robot caregivers on society, Americans think they would alleviate concerns about caring for aging relatives – but there are also fears they would lead to more isolation for those in their care 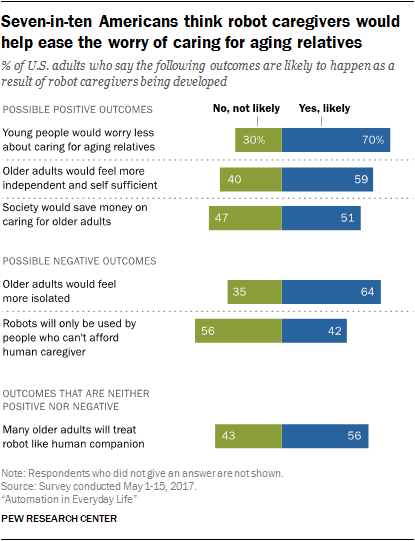 Americans anticipate both positive and negative consequences from the effort to develop robot caregivers. On the positive side, seven-in-ten Americans think robot caregivers would allow younger people to feel less worried about taking care of aging relatives, while close to six-in-ten (59%) think this concept would make older adults feel more independent and self-sufficient.

At the same time, nearly two-thirds (64%) of Americans think robot caregivers would cause the elderly to feel more isolated. And a sizable portion of the public believes these robots would come to signify class differences: 42% think it likely that robot caregivers would only be used by people who could not afford a human caregiver.

Many Americans also foresee older Americans developing deeper bonds with robot caregivers: 56% think it likely that many older adults would treat their robot caregivers like a human friend. Meanwhile, Americans are relatively evenly divided on whether these robots would lessen the costs associated with caring for the elderly.

When asked if they would feel better about the concept of a robot caregiver if there was a human who monitored its actions at all times via a camera, 48% of Americans respond in the affirmative. One-in-five (20%) say this added feature would make them feel worse about this concept, and the remaining 32% say it would make no difference to them one way or the other. 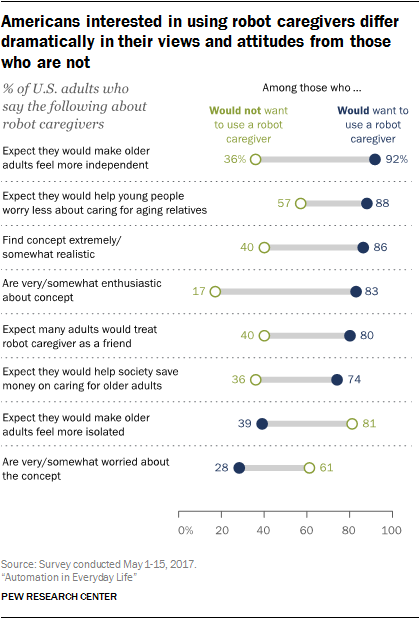 As was true of driverless vehicles, Americans who themselves would be interested in a robot caregiver have significantly more positive attitudes and expectations about this concept compared with those who would not want to do so. Most prominently, 83% of this group expresses broad enthusiasm about the development of robot caregivers for society as a whole – just 17% of those who would not be interested in this technology share that view.