Robot caregivers are an example of a physical technology that replicates a tangible activity. But other examples of automation utilize large quantities of data and machine learning capabilities to automate elements of human thinking and decision-making, rather than physical tasks. The recommendation engines used by many e-commerce and streaming media platforms are a familiar example of this phenomenon. But these tools are increasingly being used by governments and commercial entities to make decisions with potentially profound consequences for ordinary Americans – such as whether or not they are able to receive a loan or are granted parole from prison.

Survey respondents were asked to read and respond to the following scenario: “Today, when companies are hiring they typically have someone read applicants’ resumes and conduct personal interviews to choose the right person for the job. In the future, computer programs may be able to provide a systematic review of each applicant without the need for human involvement. These programs would give each applicant a score based on the content of their resumes, applications or standardized tests for skills such as problem solving or personality type. Applicants would then be ranked and hired based on those scores.”

This survey examines Americans’ attitudes towards these technologies using the scenario (highlighted in the accompanying sidebar) of an algorithm that makes hiring decisions using standardized information about job applicants. Despite the ubiquity of algorithms and machine learning in many aspects of life today, relatively few Americans have heard of or considered this specific scenario before. They express far more worry than enthusiasm about machines making these types of decisions, and few would personally want to apply for a job that used this type of computer program to hire job candidates. And although some feel that this type of program would be less biased and make better decisions than humans, a larger share expresses concern that many important qualities would be overlooked in the process. 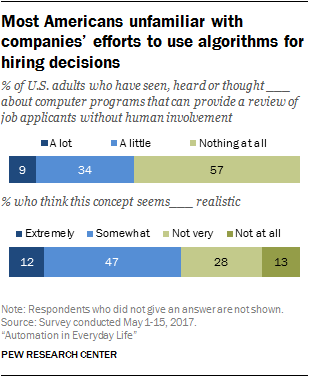 Few Americans are enthusiastic about computer programs evaluating job applicants, and many express worry about this prospect 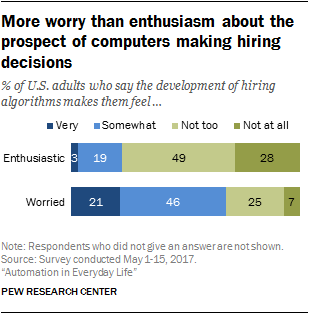 As is true of several of the concepts in this survey, Americans exhibit much more worry than enthusiasm about job candidates being vetted by computer programs. Just 3% of Americans are very enthusiastic about this prospect, and 28% are not at all enthusiastic. Meanwhile, 21% express high levels of worry, and just 7% are not worried at all. These concerns are widespread: Majorities of Americans across a range of demographic categories express some level of worry about the prospect of algorithms evaluating job candidates.

In addition to expressing much more worry than enthusiasm about this concept in general, a sizable majority of Americans (76%) say they would not want to apply for jobs that use a computer program to make hiring decisions. Just 22% would be interested in applying for employment knowing they would be evaluated by an algorithm.

A substantial majority of Americans across a range of demographic groups would not want to apply for a job that uses this type of program to hire applicants, but certain groups are somewhat more receptive than others. Most notably, 37% of 18- to 29-year-olds say they would be interested in applying for jobs that relied on a computer program to make hiring decisions, compared with 21% of those ages 30 to 49 and 16% of those ages 50 and older. In addition, men are modestly more receptive than women toward this type of program, as are those who have attended college compared with those who have not. 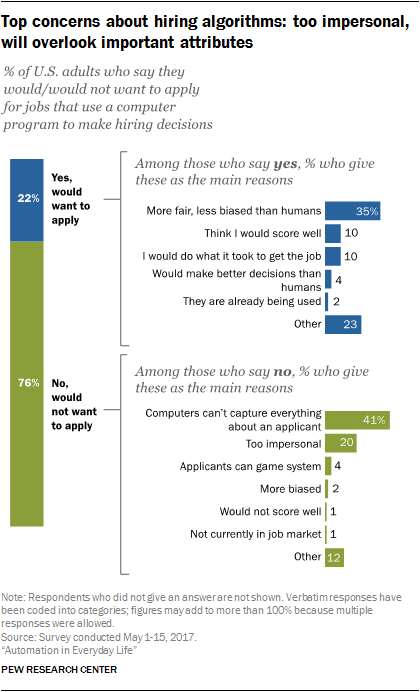 Skeptics of this concept raise two primary objections when asked why they would not be interested in applying for jobs that use a computer algorithm to evaluate candidates. The largest share (41%) believes that technology simply cannot capture the true nature of an applicant and that this sort of program would overlook many important intangible qualities. Another 20% express a more general concern that the process would be too impersonal.

“A computer cannot measure the emotional intelligence or intangible assets that many humans have. Not every quality can be quantitatively measured by a computer when hiring someone; there is much more learned by face-to-face interactions.”
– 22-year-old woman

“A lot depends on the sophistication of the program, but I do believe that hiring people requires a fair amount of judgment and intuition that is not well automated. I feel that I have a lot of skills that would be hard to quantify and require that kind of in-depth thinking and judgement.”
– 66-year-old woman

“Are you kidding me? You have to talk to the applicant to see how they interact with HUMANS. This is ridiculous and scary to think that a computer would do all the steps in hiring new employees.”
– 55-year-old woman

“Because it’s idiotic. There are nuances to everything. Such a system denigrates the value of things a program cannot measure like work ethic, dedication, integrity, and commitment level.”
– 65-year-old woman

“By not having a peer to peer interview, you are missing out on the applicants’ personality. We are already training our children in schools to be good on tests and nothing else. We need human interaction.”
– 27-year-old woman

Smaller shares say their dislike of this concept stems from their beliefs that applicants might be able deceive or “game” the computer program (4%) or that computer programs would bring more bias into the hiring process (2%).

Conversely, 35% of those who are open to this concept feel that computer algorithms would actually be fairer and less biased than humans. This is the top reason offered by those who would be interested in applying for jobs that utilized this type of hiring process.

“As a female in a male dominated profession, I would think that this would eliminate some of the personal bias that gets involved in hiring decisions.”
– 60-year-old woman

“Because I often believe individuals are chosen for positions based on appearance and other biased factors, and not the things that truly matter such as what is shown in the resume. I would want to apply for a job using a computer program because I am an ethical person and everything on my resume is true, so if I will be judged based off my qualifications and that alone then I am in favor.”
– 34-year-old woman

“People are bad at interviewing and are easily fooled in ways that would not fool a computer algorithm.”
– 31-year-old man

“This process, assuming the criteria were fairly developed, would avoid unfair discrimination and bias which impacts many hiring experiences. The successful applicant would be hired because they had the skills to do the job, not because they had a personality that clicked with the hiring authority.”
– 69-year-old woman

By and large, the public believes computer programs would do a worse job than humans at various aspects of the hiring process 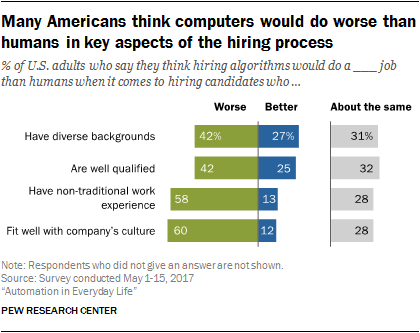 When it comes to society as a whole, the public feels that algorithms would do a worse job than humans in several aspects of the hiring process. Majorities of Americans think computer programs would do a worse job than humans at hiring candidates who fit well with a company’s culture (60%) or at providing opportunities for candidates with non-traditional work experience (58%). Relatively small shares (12% and 13%, respectively) feel that computers would outperform humans on these fronts, while around one-quarter think humans and computers would perform about the same.

Americans have a somewhat more positive view of algorithms when it comes to achieving staff diversity and choosing well-qualified applicants. About a quarter of the public thinks that these computer programs would do a better job than humans when it comes to hiring candidates from a diverse range of backgrounds (27%) or hiring people who have outstanding qualifications (25%). Even so, a plurality of Americans think computer programs would fare worse than humans at performing each of these tasks.

Public would generally feel better about hiring algorithms if they were used only for initial vetting of candidates, would feel worse if these programs were to incorporate outside data into their decision-making process 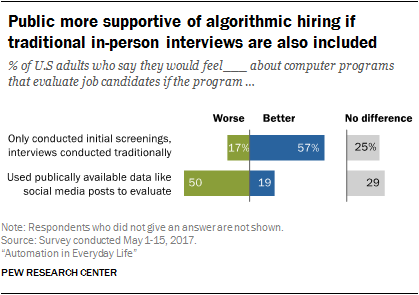 As is the case with other emerging technologies, Americans’ comfort level with hiring algorithms is closely tied to the level of human agency and overall involvement in the process. Some 57% of Americans say they would feel better about this concept if companies used these computer programs to conduct initial screenings of potential candidates but then selected from those candidates using traditional face-to-face interviews. Older Americans are especially supportive of this notion: 69% of those 65 and older would feel better about this concept if interviews were conducted traditionally and computers only did initial screenings.

On the other hand, the public responds much more negatively to the notion that these programs might use publically available data about candidates (such as the material they post on social media) to help inform their decisions. Half of Americans say this practice would make them feel worse about this concept, while just 19% say this would make them take a more positive view. 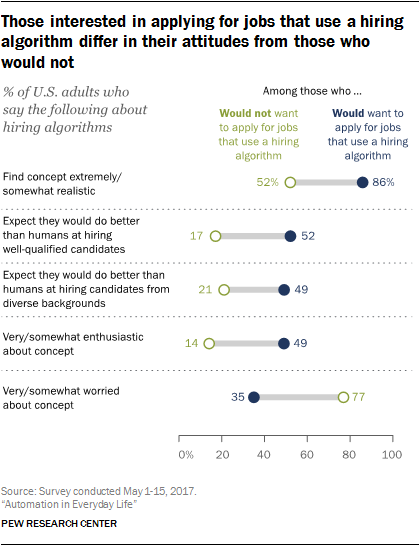 As is true of the other concepts discussed in this report, attitudes of those who would be interested in applying for jobs that used a hiring algorithm to vet candidates differ substantially from those who are not interested in this type of job. Even so, this group is relatively measured in its attitudes towards this technology: Only about half (49%) express enthusiasm about the development of these types of algorithms, and around one-in-three (35%) express some level of worry.

Next: Acknowledgements
← Prev Page
Page1Page2Page3Page4Page5You are reading page6Page7Page8
Next Page →