Driverless vehicles are among the most visible and potentially disruptive examples of the coming wave of automation in daily life. To proponents of this technology, autonomous vehicles offer a wide range of potential benefits, such as reducing traffic accidents; allowing cities to be rebuilt on more human- and pedestrian-friendly scale; or helping the elderly and disabled live more independent lives. At the same time, their widespread adoption would pose an enormous economic challenge to the millions of Americans who currently make their livings driving people or goods from one place to another.

In light of these potential social and economic impacts, the survey included a series of questions about public attitudes toward driverless vehicles. It finds that the vast majority of Americans are at least somewhat familiar with the development of driverless vehicles and that a majority expect them to become widespread within the next half-century. Even so, more than half of the public would not want to ride in a driverless vehicle today if given the opportunity. And many have significant concerns about turning life-or-death driving decisions over to machines, while expressing support for various policies restricting or limiting the use of this technology. 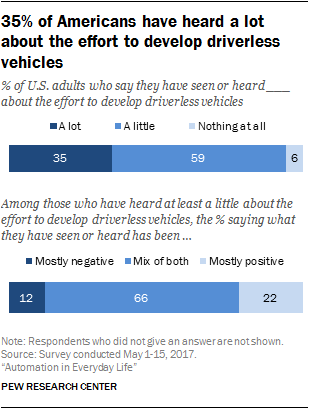 The vast majority of Americans have at least some familiarity with the effort to develop autonomous vehicles: 94% say they have heard something about this issue, with 35% indicating they have heard “a lot” about it. Awareness of driverless vehicles is high across a range of demographic groups. Still, a larger share of men than women are following this issue closely (44% of men and 26% of women have heard a lot about it), and college graduates are more likely than those with high school diplomas or less to have heard a lot about it (43% vs. 25%).

Of those who are familiar with this issue, a majority (66%) says they have been exposed to a mix of positive and negative coverage about the impact of driverless vehicles. Around one-in-five (22%) have heard mostly positive things, while around one-in-ten (12%) say they have heard mostly negative things. Americans who have been following this issue closely are relatively likely to have heard positive coverage: 34% of Americans who have heard a lot about driverless vehicles say that most of what they’ve seen or heard has been positive, but that share falls to 15% among those who have only heard a little bit about them. 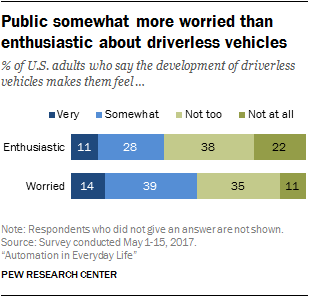 As is true of a number of the concepts examined in this survey, more Americans express worry than enthusiasm about the development of driverless vehicles: 40% are at least somewhat enthusiastic about this development, while 54% express some level of worry. Comparable shares of Americans describe themselves as being “very enthusiastic” (11%) and “very worried” (14%) about the development of driverless vehicles, but twice as many describe themselves as being “not at all” enthusiastic (22%) as opposed to not at all worried (11%).

When asked for their own views on how long it will be before most vehicles on the road are autonomous, a majority of Americans (56%) anticipate that this will happen in the next 10 to 49 years. Roughly one-in-ten (9%) expect that most vehicles will be autonomous in fewer than 10 years, but a comparable share (8%) expects that this outcome will never happen.

Just over half of Americans would not want to ride in a driverless vehicle if given the opportunity; a lack of confidence/trust in robotic decision-making and general safety concerns lead their list of worries

When asked to describe in their own words why they would not be interested in riding in an autonomous vehicle, respondents overwhelmingly bring up two major and often overlapping concepts. Some 42% of those who would not want to ride in an autonomous vehicle express a general lack of trust in the technology or an unwillingness to cede control to a machine in a potentially life-or-death situation, while another 30% specifically mention safety concerns of one type or another. 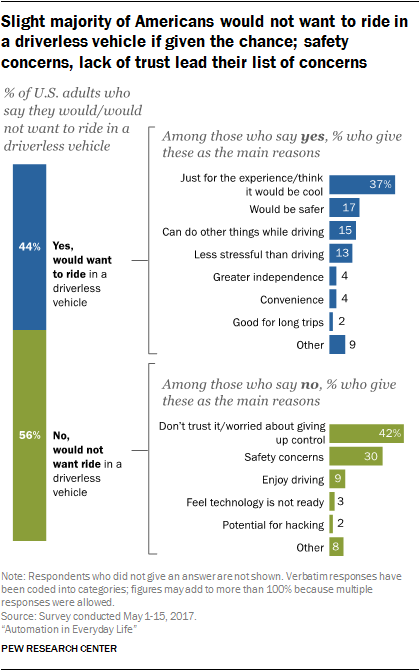 Many of these respondents express doubts that machines could ever handle the unpredictability inherent in driving; worry about ceding their agency to a process they do not fully understand; or simply view humans as uniquely well-prepared to handle unexpected situations on the road:

“I want to be in control and not have the machine choose what’s best for me.”
– 25-year-old woman

“I don’t even like being a passenger in a driverful car.”
– 43-year-old man

“What if the vehicle malfunctions? So we all just crash and die I guess?”
– 32-year-old woman

“I believe that judgments rely on human sympathy and feeling, rather than on the calculations a machine would make. Do you swerve into oncoming traffic to avoid hitting an old guy in the crosswalk?”
– 64-year-old woman

“I test drove a Tesla. When I let go of the steering wheel and gave control to the ‘machine,’ I almost peed my pants!”
– 55-year-old man

These concerns about safety and lack of control are by far the most prominent motivations offered by Americans who would not want to ride in a driverless vehicle. However, 9% say that they would not want to ride in one of these vehicles simply because they enjoy the physical act of driving. In addition, 3% say they might want to try them in the future but simply think that the technology is not sufficiently developed yet, while 2% express specific concerns that these vehicles might be hacked.

Meanwhile, those Americans who would want to ride in a driverless vehicle if they had the chance bring up several different factors driving their motivations. The largest share – representing 37% of this group – expresses a love of technology and/or the desire to try an exciting and novel experience:

“Just for the sheer pleasure of feeling I’m in the future one step beyond The Jetsons.”
– 65-year-old man

“Curiosity mainly, to see how it drives and interprets situations differently than a human.”
– 24-year-old woman

“Just for the experience … like my grandfather paying $1 (a day’s pay) for his first horseless carriage ride in the early 1900’s.”
– 84-year-old man

Another 17% of this group would like to ride in a driverless car because they feel that these vehicles will be safer than those driven by humans. In contrast to the safety concerns of those who are more skeptical of autonomous vehicles, these respondents actively look forward to a world in which machines have taken over for cognitively limited – and frequently distracted or impaired – human beings:

“Because an autonomous vehicle, if properly programmed, has no ego. It does not feel road rage or impatience.”
– 62-year-old man

“Drunk drivers. I want my children safe and too many people in the USA get behind the wheel when over the limit, or too tired and distracted by phones.”
– 47-year-old woman

“I live in Florida, and traffic signs here seem to be a ‘suggestion’ to most drivers. Many drivers here are bullies on the road … it is horrible. Perhaps having vehicles that are made to obey the laws will eliminate this trend towards using your car/truck as a lethal weapon!”
– 65-year-old woman

“I think it will be safer. We accommodate a large number of traffic deaths because they come in very small numbers. Very different from the way we see airline crashes with hundreds dead in a single incident. Automated driving will be safer and faster.”
– 52-year-old man

“Take out the ‘human error’ factor and the frequency of accidents will plummet.”
– 54-year-old man

Comparable shares of this group say they would like to ride in a driverless vehicle because they would be able to do things like sleep or be productive while in the car (15%), or because it would be generally less stressful than driving (13%). And a small number mention factors such as greater independence for people who have difficulty driving on their own (4%), greater convenience (4%) or the fact that autonomous vehicles would be especially appealing on long trips (2%).

Many Americans would personally feel unsafe sharing the road with an autonomous vehicle; they are divided on whether these vehicles would ultimately increase or decrease accidents but express strong support for various practical restrictions on their use 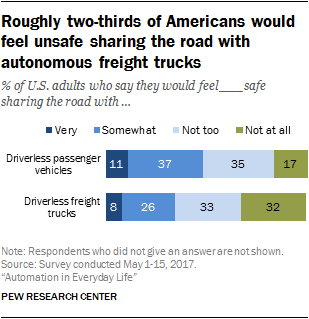 Along with these general concerns, the public is strongly supportive of several rules and restrictions governing the use of driverless vehicles. Most prominently, 87% of Americans favor (with 53% favoring strongly) a requirement that all driverless vehicles have a human in the driver’s seat who can take control in an emergency situation. A similar proportion of Americans (83%) favor requiring driverless vehicles to travel in dedicated lanes, with 47% supporting this strongly. A slightly smaller share – although still a substantial majority at 69% – supports restricting autonomous vehicles from traveling near certain areas, such as schools. Although there are modest differences in support for these policies, each is favored by a majority of Americans across a wide range of demographic groups. 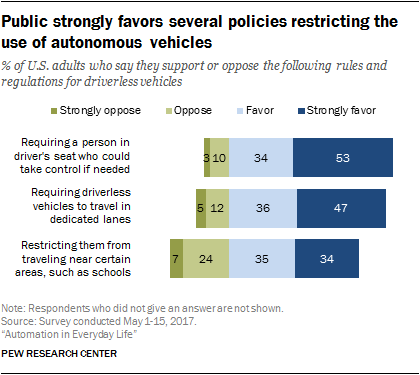 Americans expect certain outcomes to be more probable than others in the event that driverless vehicles become widespread. In terms of positive impacts, 75% of Americans anticipate that widespread use of autonomous vehicles will help elderly and disabled people live more independent lives than they do today. However, just 28% of U.S. adults anticipate that driverless vehicles will lead to reduced levels of traffic in major cities. 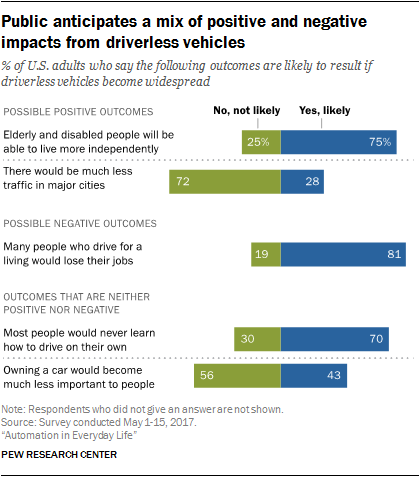 In terms of negative outcomes, roughly eight-in-ten Americans (81%) expect that this development will cause many people who currently drive for a living to lose their jobs. This view is held by a substantial majority of Americans across a wide range of demographic and attitudinal characteristics – men and women, young and old, those with greater and lesser levels of educational attainment, and those with varying levels of awareness of this issue in general.

The public also offers somewhat conflicting expectations toward the nature of car ownership in a world of driverless vehicles. Seven-in-ten Americans expect that most people will never learn how to drive on their own if these vehicles become widespread. Simultaneously, fewer than half (43%) expect that owning a car will become less important to people than it is today. 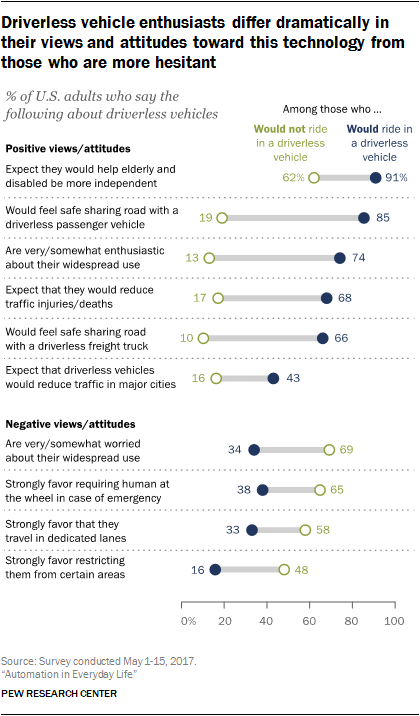 Across numerous questions in the survey on this subject, Americans who themselves would like to ride in a driverless vehicle stand out by substantial margins from those who would not want to do so. They express greater levels of enthusiasm and lower levels of worry about the ultimate impact of this technology, and they are more likely to say they would feel safe sharing the road with both autonomous cars and freight vehicles. They also anticipate a wider range of benefits from the development of autonomous vehicles – such as reduced traffic, fewer people injured or killed in traffic accidents, and increased independence for the elderly or disabled. Simultaneously, they are less likely to strongly favor various rules or policies that restrict the everyday use of driverless vehicles compared with those who would not wish to ride in a driverless vehicle themselves.