The cluster analysis yields five groups of people based on their information interests, their trust in a variety of sources, their assertions about their learning interests when it comes to digital information, some lifestyle issues, and their technology assets. These groups are distinguished in key respects by the variances in how they cope with trust (or lack of trust) in information and their desire (or not) to learn.

The chart below shows how people’s answers on several questions play out across the five groups. Note that the growth-mindset measure refers to the 53% who said any one of three things describe them very well – that music skills can be developed, that they could benefit from acquiring better digital skills, or that they would be interested in information literacy training. High trust refers to the 28% of all adults who trust three or more of the information sources about which they were asked. Personal tech abundance refers to the 42% of adults who have a broadband connection at home, a smartphone and a tablet computer. 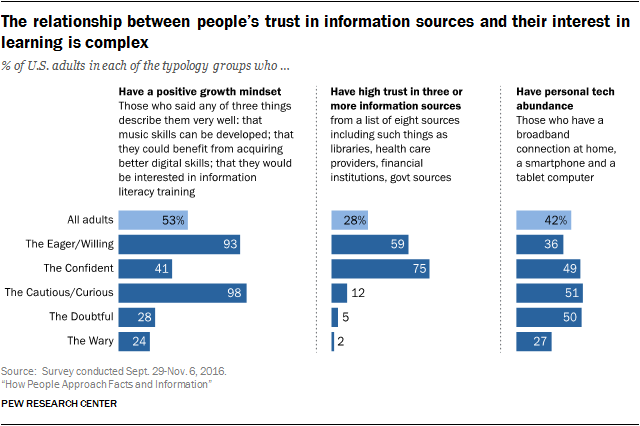 The chart shows some of the variance in the connection between people’s trust in information sources and their interest in learning. This relationship is particularly evident in two groups: the Eager and Willing and the Confident. But the Cautious and Curious illustrate a different pattern. They are quite interested in learning, even though they hardly trust any of the information sources we queried.

Additionally, abundant access to the internet does not neatly associate with trust in information sources. For example, the Doubtful have below-average interest in news and information even though most have three key kinds of digital connections – home broadband, a smartphone and a tablet computer.

The other factors that influence how people sort into groups are linked to their level of skill in using the internet to find information and how busy they think they are, whether they think they are usually trying to do two or more things at once. As the chart below shows, these factors seem unimportant to the Wary, whose classification comes mainly from a low level of trust and lower levels of enthusiasm for learning. But they are important for the Doubtful, who are especially likely to say they regularly find themselves doing two things at once. The Cautious and Curious sometimes need help finding things online, but might be too busy to reach out for help. 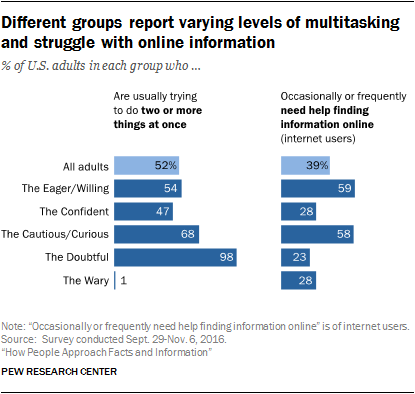 Here is a fuller breakdown of how the groups differ (and all of the typology analysis is reported in the Appendix:

The most ardent information-engaging group is the Eager and Willing, which makes up 22% of the adult population. This group has the highest levels of interest in news and information in a variety of topics, as well as a high degree of trust in information sources. More than any other group, they strongly trust their family and friends and libraries as information sources. (They are the most active library users, too.)

The Eager and Willing also have a strong interest in personal learning. They are more than twice as likely as all adults to say they would be very interested in digital skills or information literacy training. Perhaps this tied to the fact they report a high level of needing help finding the information they want online. They also wish, to an extent far greater than any other group, that a public library were closer to home and had expanded hours.

Relative to three of the other groups, they do not have particular abundance in digital information access tools and, perhaps for that reason, about six-in-ten report at least occasional difficulty finding information online.

Demographically, the Eager and Willing are majority minority: Some 38% are white, while 52% are either black (21%) or Hispanic (31%). Compared with other groups, this group has lower incomes and educational attainment.

Key differentiators: The Eager and Willing have the highest levels of interest in news and information across a variety of topics. They have a strong orientation toward learning. This group also turns to the library for information and wishes hours were better or a library was closer to home.

The Confident report the highest levels of trust in information sources, with particularly strong levels of trust in national news organizations, government sources and health care providers. They also have above-average interest in news, with special emphasis on government and politics and foreign affairs.

They have relative abundance of tech-access tools, with half (49%) having all three access devices, compared with the average of the overall population, which is 42%. The Confident do not feel they need additional training in digital skills or information literacy. That may be because of the group’s high levels of educational attainment. This group is also, on the whole, relatively well-off economically and younger, compared with other groups. The Confident are more likely than all but The Eager and Willing to have used a library in the past year. They also join the Eager and Willing in trusting libraries as information sources.

Key differentiators: The Confident have the highest overall level of trust in information sources. That is accompanied by high levels of educational attainment. Their self-assurance is evident in how little they feel they need to improve digital skills or information literacy, while they have strong interest in news and information.

The Cautious and Curious (13%)

The Cautious and Curious group falls in the middle of the typology. They are, on the one hand, somewhat above average levels of interest in news and information. Yet their trust in information sources falls below average. They express clear concerns about their digital skills and at the same time have interest in learning how to gain better skills. About six-in-ten of the internet users in this group occasionally or frequently have trouble finding things online – compared with 39% for the general population. At the same time, the Cautious and Curious are more than twice as likely as all adults to be interested in getting training on digital skills and information literacy. This arises even though those in this group report significant levels of stress over trying new things and that they have busy lives.

This group does have an abundance of information access points, with 51% having each of three access tools (home broadband, a smartphone, and a tablet computer). They have somewhat lower levels of educational attainment than average, but their household income is in line with the average.

Key differentiators: The Cautious and Curious have high interest in learning, but it clashes with other factors. They have relatively low levels of digital skills and lead busy lives. They also have some distrust of news and information sources. That means they fall below the Eager and Willing and the Confident in their engagement with information.

This group has fairly typical levels of interest in information (just below average) and visit the library on par with others. Yet they have low levels of trust in information sources – especially national and local news organizations. They are also much more likely than average to say they are often trying to do two or more things at once and less likely than others to say it is easy for them to relax.

The Doubtful group does not exhibit a growth mindset when it comes to acquiring digital skills or information literacy, even though they are above average on measures of educational attainment and income. Additionally, this group has the highest rate of full-time employment among all groups. They also have the digital tools to engage with information. Some 50% have all three key digital access tools. It may be that their lack of time and low trust in information sources dampens their interest in following information. Nearly all (98%) find themselves sometimes trying to do more than one thing at a time, and they are the second lowest group in terms of metrics measuring trust in information sources.

Key differentiators: The Doubtful have low levels of trust in information sources and very busy lives. They fall below the Cautious and Curious in their interest in several information topics and they have virtually no interest in training.

Although the Wary are below average in access to information technology, they are not bereft of connectivity. Some 61% have broadband at home and 62% have smartphones. Only 39% have used the library in the past year (below the 52% national average). Demographically, they are heavily male (59%) and have only slightly lower levels of educational attainment than the norm. However, they are an older group: 33% are ages 65 or older vs. the 18% average.

Key differentiators: The Wary are the least likely to own any of the technology tools on our list. They have low trust in information sources, a low enthusiasm for learning and the lowest interest in any information topic. They are more stressed in some ways than the Doubtful.

Next: 3. People’s varying wish lists for information aids that might help them make decisions
← Prev Page
Page1Page2You are reading page3Page4Page5Page6Page7
Next Page →