Nearly six in ten cell owners used their phone inside a physical store for assistance or guidance on a purchasing decision this holiday season. In the 30 days preceding our early January 2013 survey (the final weeks of the holiday gift-giving season): 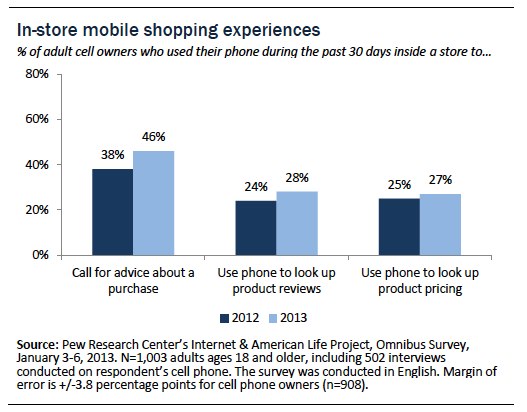 When asked what happened on the most recent occasion they looked up the price of a product inside a store using their cell phone, 46% of “mobile price matchers” say that they ultimately purchased the product in that store — an 11-point increase from the 35% of such price matchers who said this in 2012. Some 12% wound up purchasing the product online, a figure that is not significantly different from the 19% who did so in our 2012 survey.

These findings come from a survey of 1,003 adults ages 18+ between January 3-6, 2013. The interviews were conducted in English on cell phones and landline phones and the margin of error is plus or minus 3.8 percentage points for the 908 respondents who are cell phone owners and who received most of the questions that are reported here.

Next: Detailed Findings
← Prev Page
You are reading page1Page2Page3
Next Page →