Some but not most users of social networking sites say the sites are important for a variety of political activities:

In each activity, Democrats who use social networking sites are more likely than Republicans or independents to say the sites are important. 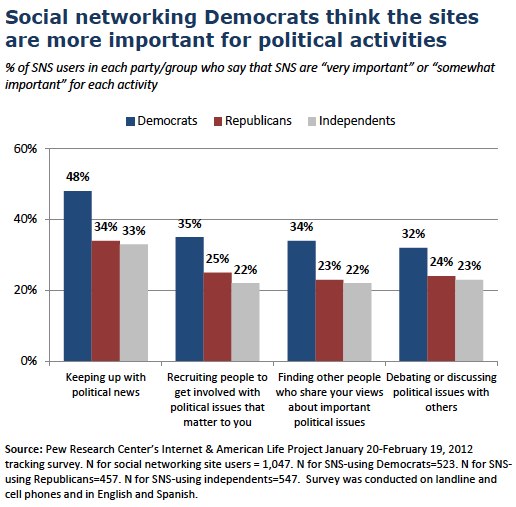 The vast majority of SNS users (84%) say they have posted little or nothing related to politics in their recent status updates, comments, and links. Only 6% of these users say that most or all of what they posted recently on social networking sites is related to politics, issues, or the 2012 campaign. Another 10% say some of what they have recently posted has been about politics.

Beyond the context of social networking sites, we asked people in this survey how often they have political discussions with friends and family. Some 33% of all respondents say they “very often” have political discussions with family and friends; 34% say they “sometimes” have such conversations, 20% say they “rarely” talk about politics, and 12% say they “never” talk about politics. Those who talk very often about politics with family and friends are more likely than others to use SNS for political purposes and say their use of the sites has affected them. Here’s what the most politically engaged citizens say about their use of SNS:

These are the findings from a survey conducted from January 20-February 19, 2012 among 2,253 adults ages 18 and older, including 901 cell phone interviews. Interviews were conducted in English and Spanish. The margin of error for the full sample is plus or minus 2.3 percentage points. And the margin of error of the sample dealing with social network site users (n=1,407) is plus or minus 2.9 percentage points.