There is considerable interest in the role that social networking sites (SNS) are playing in politics and campaigns. Both Barack Obama and Mitt Romney and scores of state and local candidates and countless advocacy groups are using Facebook pages and other social media tools to try to engage voters this year. At the same time, some analysts have expressed concerns about the impact of social networking sites on the broad political culture. It is widely believed that SNS users might be living in echo chambers where they only encounter and chat with people who share and reinforce their political views.

A survey earlier this year by the Pew Research Center’s Internet & American Life Project looked at people’s general use of SNS for politics and about the ways in which they interact with friends on the sites over political material.

The findings from this survey about social networking sites and politics are being covered in two reports: The first was issued in the spring and focused on citizens’ answers to some of the questions in the survey that dealt with how SNS users deal with friends and political issues on the sites, especially when they agree and disagree with their friends’ political postings.1

Overall, the survey found that 80% of American adults use the internet and 66% of those online adults participate in social networking sites (SNS) such as Facebook, LinkedIn, or Google+. That amounts to more than half of the entire U.S. population who are SNS users.

There were no statistically significant differences among Democrats, Republicans, and independents in their overall use of SNS. All were equally likely at least to be social networking site users. 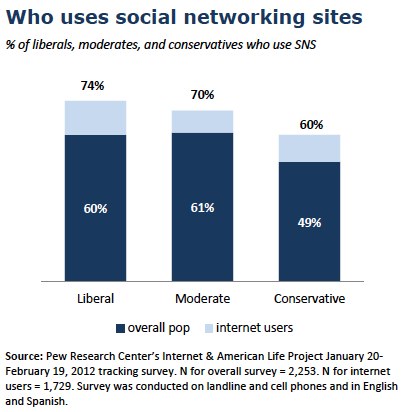 In addition, some key findings in the first report:

These figures suggest that the majority of SNS users are not actively seeking out friends based on political affiliation or views, nor are most culling their networks to rid them of those with opposing political points of view.

This second report adds to that picture by exploring some questions in the survey dealing with the impact of political material on social networking site users.

The importance of social networking sites for political activities

Users of social networking sites were asked for their overall view of how important the sites are for them personally when it comes to several aspects of political activity:

Of course, this means that sizeable majorities of social networking site users do say the sites are not too important or not important at all for those political activities. The chart below shows that breakdown by each political activity. 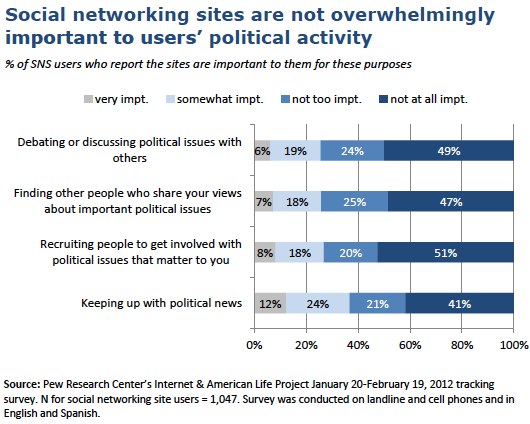 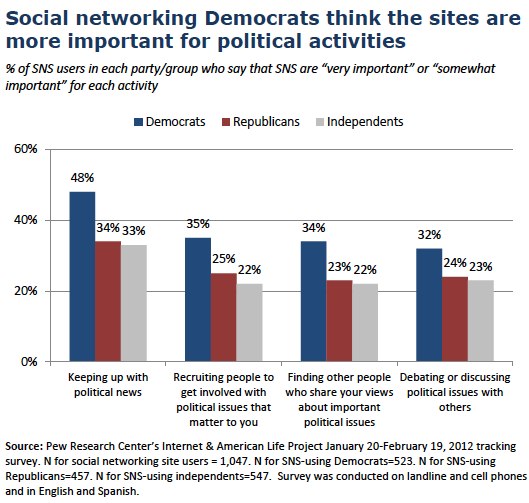 At the same time, the SNS users who describe themselves as very conservative are often among the most enthusiastic about importance of the site for various purposes. There were not enough cases in this sample to do a thorough statistical analysis, but the SNS users who self-describe as very conservative were among the most likely to say that these sites are important for keeping up with political news, recruiting others to their causes, finding like-minded friends, and debating issues. 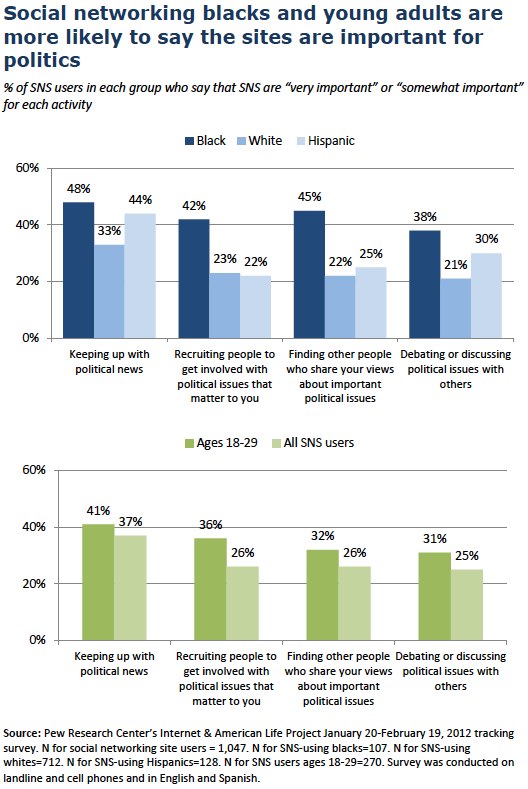 In keeping with their reports that social networking sites play modestly important roles for key political activities, site users also have mostly reserved views about the impact on their political views:

Put another way, the clear majority of SNS users do not report that their use of the sites has changed their political views or activity.

There are some noteworthy differences among partisans on several of these answers: Democrats and liberals who use social networking sites are more likely than others to say their activities on the sites have led them to become more active on a political issue. 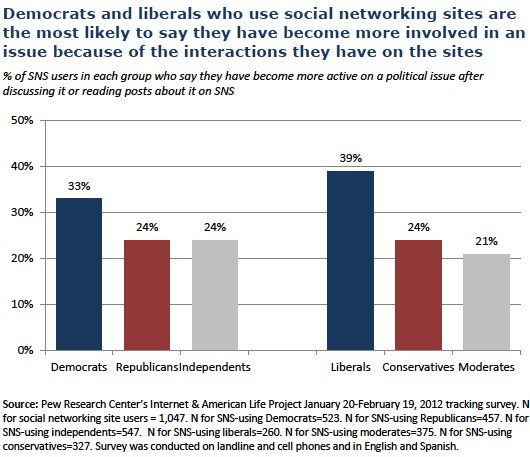 How much political posting social networkers do

The vast majority of SNS users (84%) say they have posted little or nothing related to politics in their recent status updates, comments, and links. Some 63% of SNS users say they posted nothing at all and another 21% say they posted “just a little.” Only 6% of these users say that most or all of what they posted recently on social networking sites is related to politics, issues, or the 2012 campaign. Another 10% say some of what they have recently posted has been about politics. 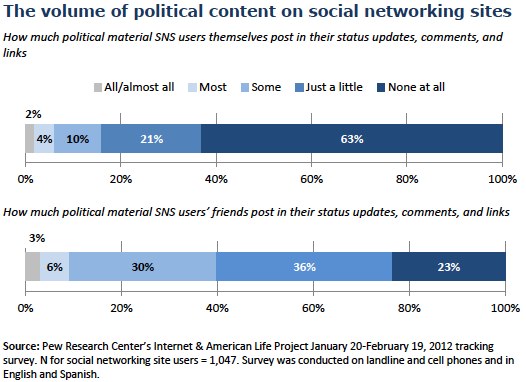 Overall, there are only modest differences along partisan lines in the volume of political posting and reading political posts. Democrats who use SNS are more likely than either Republicans or independents to say that most or all of the material their friends post is about politics, although political posts from friends are generally a minor factor for each of these groups (13% of SNS-using Democrats say all of most of the posts their friends make are about politics, compared with 7% of Republicans and 6% of independents). Democrats and Republicans who use SNS are equally likely to say most or all of the material they themselves post is about politics. 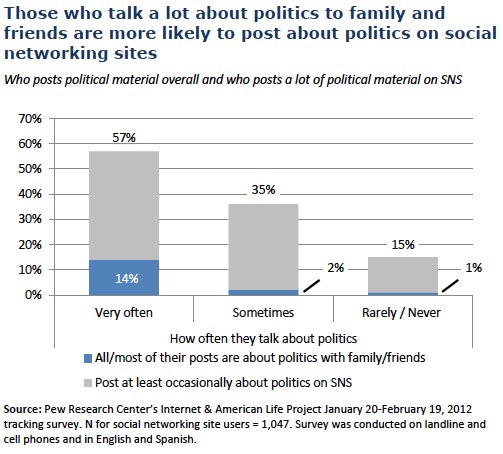 Those who are politically engaged are also more likely than less-engaged SNS users to see material posted by their friends that mostly reflects their own political views. Some 34% of those who talk very often about politics say the material they see on SNS mostly agrees with their beliefs. Still, it is also the case that the most engaged are just as likely as others to see political material on the sites from their friends with which they disagree.

When they do see political postings with which they disagree, the most engaged SNS users are more likely than others to follow up with a reply. Some 35% of those who talk about politics “very often” say they usually respond to material that challenges their views by posting a comment in reply, while 55% say they ignore such posts. The SNS users who don’t talk very often about politics are much more inclined simply to ignore a friend’s post that challenges their point of view. About three-quarters of the less politically engaged SNS users tend to ignore material with which they disagree.

Those who talk the most and post the most about politics are also more likely than others to have drawn a strong negative reaction to the political material they contribute to SNS. Some 42% of SNS users who talk a lot about politics say they have received some blowback about their posts.

In their overall judgment, the SNS users who are politically engaged are the most enthusiastic about the role of those sites in key political activities. They are more likely than those who are less engaged with politics to say the sites are useful for keeping up with political news, for debating issues, for recruiting people to their cause, and finding others who share similar beliefs. 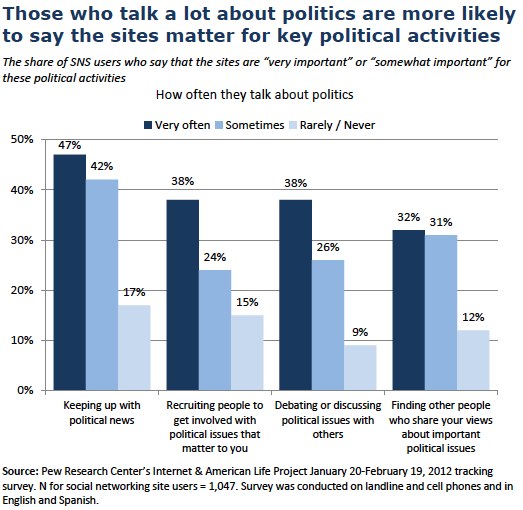 The SNS users who are the most politically engaged are also more likely than others to say their use of social networking sites has prompted them to become more active in an issue that mattered to them. 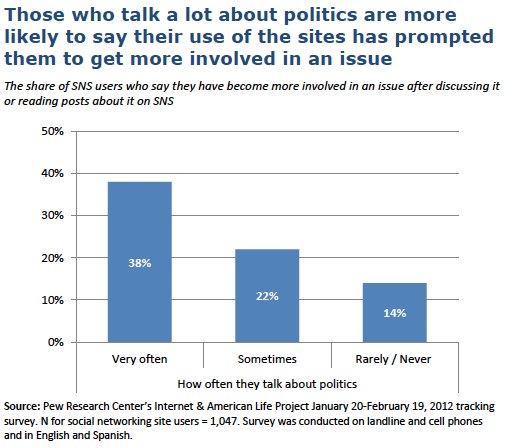 Social NetworkingSocial MediaPolitics OnlineElection News
Defining generations: Where Millennials end and Generation Z begins
25% in U.S. see at least some truth in conspiracy theory that COVID-19 was planned
Are you in the American middle class? Find out with our income calculator
Americans Who Mainly Get Their News on Social Media Are Less Engaged, Less Knowledgeable
Americans Fault China for Its Role in the Spread of COVID-19