As of April 2012, 53% of American adults ages 65 and older use the internet or email.9 Though these adults are still less likely than all other age groups to use the internet, the latest data represent the first time that half of seniors are going online. After several years of very little growth among this group, these gains are significant. In August of 2008, 38% of adults ages 65 and older were online; by August of 2011, the share of seniors using the internet or email at least occasionally had barely inched up to 41%. However, by February of this year the number of online seniors had bumped up to 48%. In the latest survey, 53% said they used the internet or email. 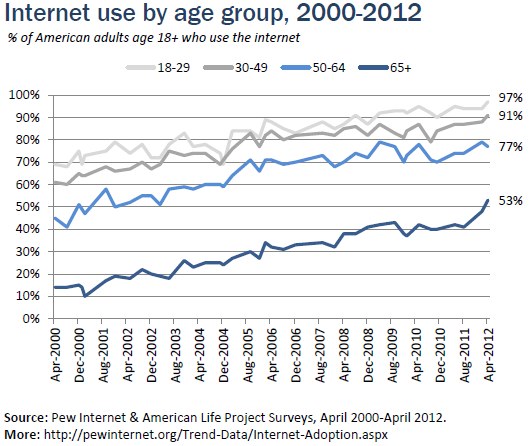 Among the next oldest age group that we commonly examine, adults ages 50-64, almost eight in ten (77%) use the internet, a proportion that has remained relatively steady over the past three years.

Overall, 82% of all American adults ages 18 and older say they use the internet or email at least occasionally, and 67% do so on a typical day.

Once online, internet use becomes a regular part of seniors’ lives.

Although half of adults ages 65 and older remain disconnected from the internet, once online, internet use becomes a fixture in everyday life for seniors. Overall, 82% of all adult internet users go online on an average day. Among adults age 65 and older, 70% use the internet on a typical day. That compares to:

These findings largely echo other recent research examining older adults’ use of technology. Once they are given the tools and training needed to start using the internet, they become fervent users of the technology.10

It is also now the case that once seniors start using the internet, they most often have access to high-speed connections at home. Among all adults ages 65 and older, 39% say they have a broadband connection at home, up from just 8% in 2005.11 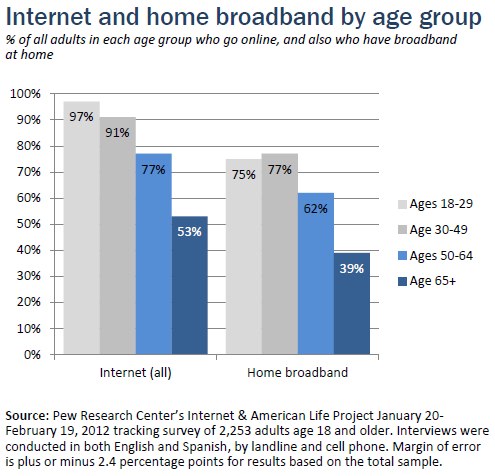 After age 75, internet and broadband use drops off significantly.

Looking more closely at the “G.I. generation” (those who are currently ages 76 and older) reveals a starkly different reality. Internet adoption among this group has only reached 34% as of April 2012, and  home broadband use has inched up to 21%. 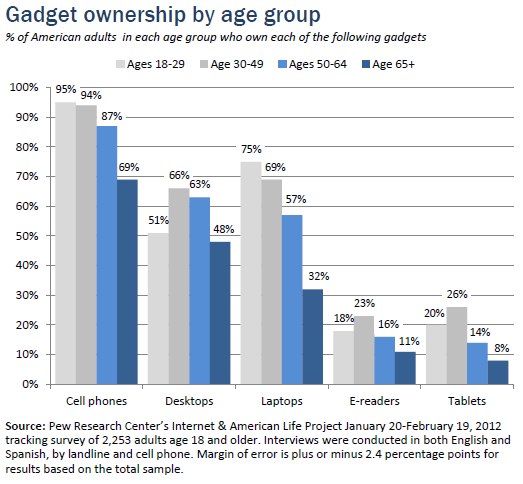 Seven in ten seniors own a cell phone, up from 57% two years ago.

With the exception of desktop computers, seniors ages 65 and older are less likely than other age groups to own any digital devices.  However, cell phones are owned by the majority of the senior population; 69% of adults ages 65 and older have a mobile phone, up from 57% in May 2010. Even among those who are currently 76 and older, 56% report owning a cell phone of some kind, up from 47% of this generation in 2010.14 Still, smartphone ownership among older adults is quite low. Just over one in ten adults ages 65 and older say they have one of these feature-rich phones.15 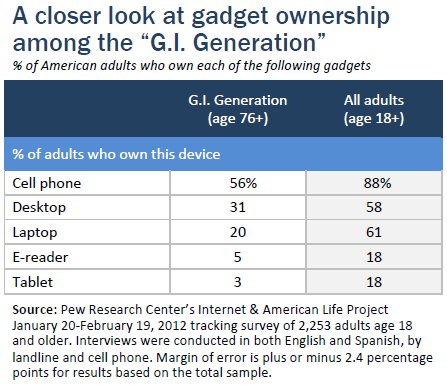 Desktop ownership among seniors has been steady over the past couple of years; 48% now report having desktop computers, compared with 45% in 2010. Laptops, by comparison, have grown in popularity; 32% of adults ages 65 and older now own them, up from 24% in 2010.

One in ten seniors own an e-book reader, up from 3% two years ago.

Having e-book readers like Kindles and Nooks is still the exception rather than the rule among the senior population. However, almost four times as many seniors own e-book readers now as did just two years ago; 11% reported owning them in the most recent survey, compared with just 3% in 2010. Tablet ownership is also growing; 8% of seniors have them, up from 1% in 2010.

One in three online seniors uses social networking sites like Facebook and LinkedIn; almost nine in ten use email. 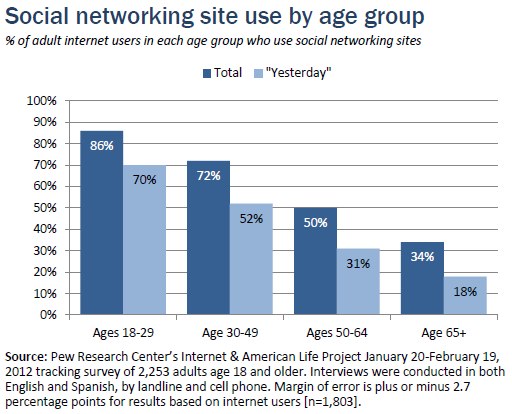 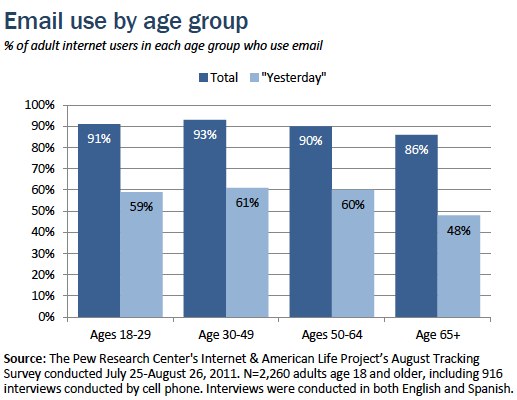 A closer look at seniors and social networking sites 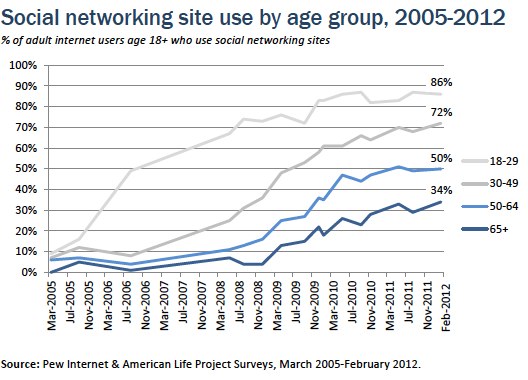 Older adults and internet use
Main Report
Once online, internet use becomes a regular part of seniors’ lives.After age 75, internet and broadband use drops off significantly.Seven in ten seniors own a cell phone, up from 57% two years ago.One in ten seniors own an e-book reader, up from 3% two years ago.One in three online seniors uses social networking sites like Facebook and LinkedIn; almost nine in ten use email.A closer look at seniors and social networking sitesInternet adoptionGadget ownershipOnline activities
Methodology