Almost one in five adult smartphone owners use geosocial services 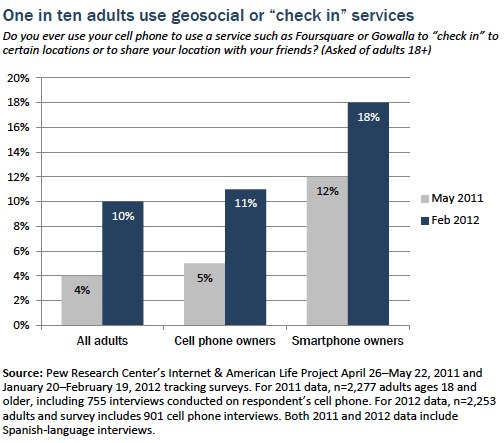 Unlike as with location-based information services, smartphone owners with lower household incomes are somewhat more likely to use these services than those in higher-income households. There are no significant differences among smartphone owners by race or ethnicity. 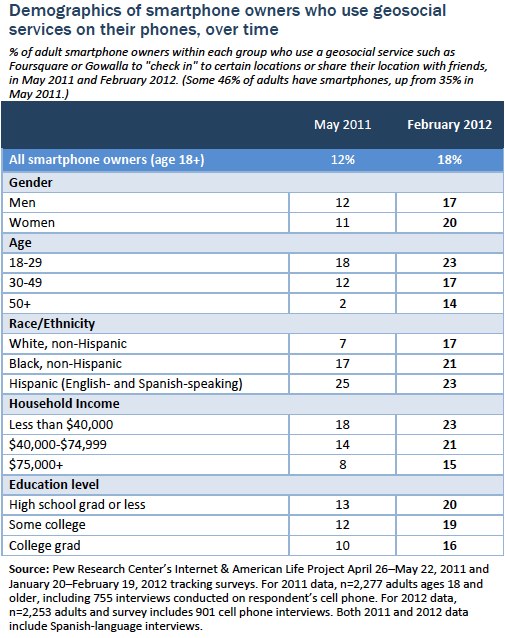 Recent changes in the geosocial landscape

Since our previous survey, Facebook ended its mobile location-sharing service “Facebook Places” and shifted its focus to using a general location “layer” that runs throughout its other services. In this set-up, location is yet another piece of information that can be “tagged” on to another piece of content, like a name or date, as opposed to a stand-alone service.8 (In May 2011, we found that 14% of social media users used automatic location-tagging on their posts.9) Facebook acquired the mobile geosocial service Gowalla in December 2011, and the service ended in early 2012.10

Around 1 in 20 teens use geosocial services

In addition, another 54% of teens have a regular cell phone (or are not sure what kind of phone they have), and 23% do not have a cell phone at all.

In general, older teens ages 14 to 17 are more likely to use geosocial services than 12 and 13-year-olds. (In our sample the largest group of teens who broadcast their location was 17-year-olds.) There are no statistically significant differences in use of geosocial services by gender, race, household income, or parents’ education level. For more information about teens and geosocial services (presented in terms of all teens, as opposed to only teen smartphone owners), see our recent report, “Teens, Smartphones & Texting.” 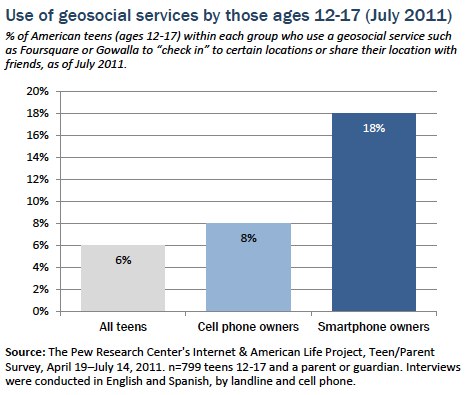