The 2011 Teens and Digital Citizenship Survey sponsored by the Pew Research Center’s Internet and American Life Project obtained telephone interviews with a nationally representative sample of 799 teens ages 12 to 17 years old and their parents living in the continental United States. The survey was conducted by Princeton Survey Research Associates International. The interviews were conducted in English and Spanish by Princeton Data Source, LLC from April 19 to July 14, 2011. Statistical results are weighted to correct known demographic discrepancies. The margin of sampling error for the complete set of weighted data is ±4.8 percentage points.

In addition to the two surveys, this study conducted 7 focus groups with teens between the ages of 12 and 19 in the greater Washington, DC metro area in January and February 2011. Participants were recruited via word of mouth, email, schools, and non-profit organizations. A total of 57 youth participated in the focus groups, though each group averaged 8 to 14 people. Groups were co-ed, but were broken into middle school and high school aged youth. The groups were balanced for gender and crossed the socio-economic and family structure spectrum. Black youth were over-represented. All participants were required to have access to either a computer or a cell phone to participate. Participants were paid a $40 cash incentive for their participation. Parental consent was obtained for all minor participants, as was the assent of the minor participants themselves. Eighteen and 19 year-old participants consented to their own participation.

Further details on the design, execution, and analysis of the teen and parent telephone survey are discussed below.

Both samples were disproportionately stratified to increase the incidence of blacks and Latinos. The same stratification scheme was used for both sample frames and was based on the estimated incidence of minority groups at the county level. All counties in the continental United States were divided into ten strata based on the estimated proportion of African American and Latino populations. Strata with higher minority densities were oversampled relative to strata with lower densities. Phone numbers were drawn with equal probabilities within strata. The disproportionate sample design was accounted for in the weighting and does not affect the representative nature of the sample.8

Interviews were conducted from April 19 to July 14, 2011. As many as 7 attempts were made to contact and interview a parent at every sampled telephone number. After the parent interview, if the teen was not immediately available, an additional 7 calls were made to interview an eligible teen. Sample was released for interviewing in replicates, which are representative subsamples of the larger sample. Using replicates to control the release of sample ensures that complete call procedures are followed for the entire sample. Calls were staggered over times of day and days of the week to maximize the chance of making contact with potential respondents. Each telephone number received at least one daytime call in an attempt to complete an interview.

Interviewers were given instructions to tell parents – if asked – that they should not remain on the phone with the child during the interview, but that if they were concerned they could sit nearby. The interviewer then coded whether or not the parent remained on the phone with the child. In this survey, 90 of the 799 interviews (or 11%) had a parent listening on the phone during the child’s interview. Parents who elected to remain on the phone while their child completed the interview were more likely to be listening to the interviews of girls and children age 12 and to a lesser extent, age 13. These parents were also more likely to be white. Teens whose parents listened to their interview were less likely to use the internet, use social network sites, or go online using a mobile phone. Among those teens whose parents attended their interview who do use social network sites, they were more likely to report using Facebook than teens whose parents did not listen in. We elected to retain these interviews as a part of our larger sample – first because there were very few statistically significant differences between the responses of teens whose parents listened in, and those whose parents did not. Second, in the places where we did see modest differences, understanding what might be behind those differences was difficult to tease out – the age of the child may have been a factor, or how the parent parented that child, or the fact that the parent was listening to the interview. So rather than introduce additional bias into the data, we elected to leave the cases in the data set, and note in the text where the parent’s listening made a statistically significant difference in the responses of the teen.

Weighting is generally used in survey analysis to compensate for patterns of nonresponse and disproportionate sample designs that might bias survey estimates. This sample was weighted in three stages. The first stage of weighting corrected for the disproportionate RDD sample designs. For each stratum the variable SAMPWT was computed as the ratio of the size of the sample frame in the stratum divided by the amount of sample ordered in the stratum.

The second stage of weighting involved correcting for different probabilities of selection based on respondents’ phone use patterns. Respondents who have both a landline and a cell phone have a greater chance of being sampled than respondents with access to only one kind of phone. To correct for this we computed a variable called PUA (Phone Use Adjustment). Respondents with one kind of phone (either landline or cell) were assigned a PUA of 0.5 while respondents with both types of phones were assigned a PUA of 1.0. SAMPWT and PUA were then multiplied together to use as an input weight (WEIGHT1) for post-stratification raking

The interviewed sample was raked to match national parameters for both parent and child demographics. The parent demographics used for weighting were: sex; age; education; race; Hispanic origin; number of 12- to 17-year-olds in household; phone use and region (U.S. Census definitions). The child demographics used for weighting were gender and age. The parameters came from a special analysis of the Census Bureau’s 2010 Annual Social and Economic Supplement (ASEC) that included all households in the continental United States. The phone use parameter was derived from recent PSRAI survey data.

Raking was accomplished using Sample Balancing, a special iterative sample weighting program that simultaneously balances the distributions of all variables using a statistical technique called the Deming Algorithm. Weights were trimmed to prevent individual interviews from having too much influence on the final results. The use of these weights in statistical analysis ensures that the demographic characteristics of the sample closely approximate the demographic characteristics of the national population. Table 1 compares weighted and unweighted sample distributions to population parameters. 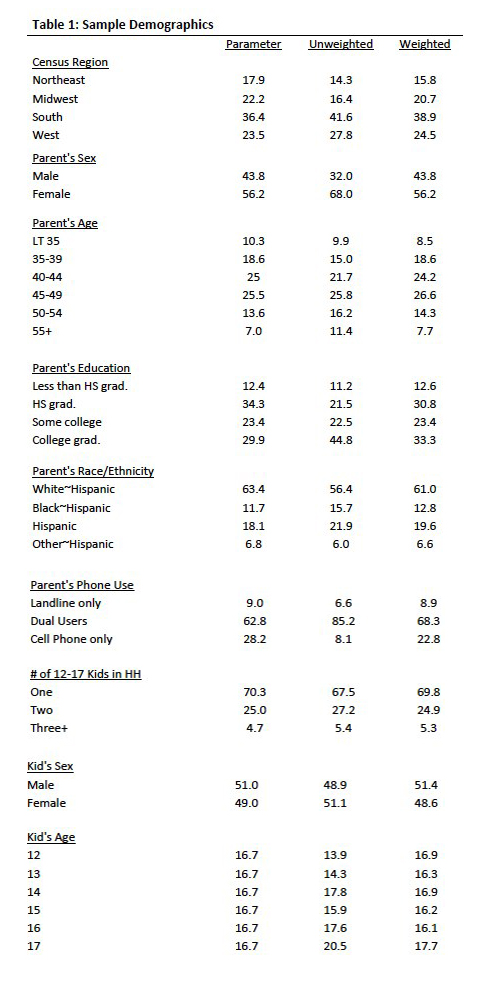 Post-data collection statistical adjustments require analysis procedures that reflect departures from simple random sampling. PSRAI calculates the effects of these design features so that an appropriate adjustment can be incorporated into tests of statistical significance when using these data. The so-called “design effect” or deff represents the loss in statistical efficiency that results from systematic non-response. The total sample design effect for this survey is 1.95.

Table 2 reports the disposition of all sampled callback telephone numbers ever dialed. The response rate estimates the fraction of all eligible respondents in the sample that were ultimately interviewed. At PSRAI it is calculated by taking the product of three component rates:10 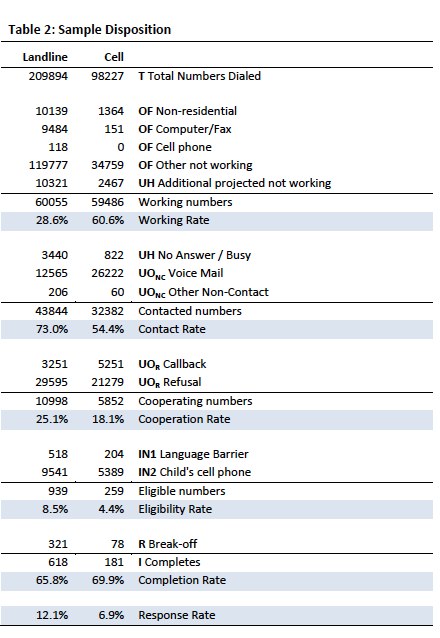 The topline for this report is available to download as a PDF here.