According to the Pew Internet Project’s 2011 teen survey, three quarters (77%) of teens have a cell phone, a figure that is similar to the 75% of teens who owned a cell phone in September 2009 and up dramatically from the 45% of teens who were cell owners in late 2004. 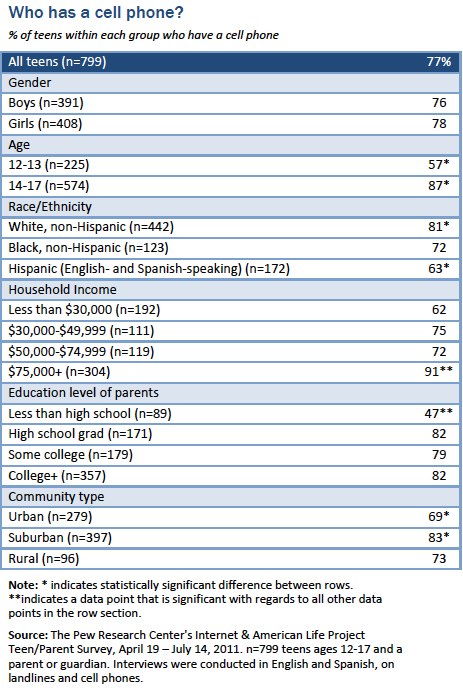 23% of teens have a smartphone

One quarter (23%) of teens 12 to 17 indicate that their phone is a smartphone, while 54% have a regular cell phone (or are not sure what kind of phone they have), and another 23% of teens do not have a cell phone at all. Using a different series of questions to measure smartphone ownership,3 we found that 46% of adults report having a smartphone of some kind in early March 2012.

As with adults, smartphone-owning teens are avid users of a number of social media applications—91% of teen smartphone owners use social networking sites, and 25% are Twitter users compared with 77% of teens without smartphones who use social network sites and 13% who use Twitter.

Smartphone owners are much more likely than other teens to have gone online on mobile phones & tablets in the last 30 days. 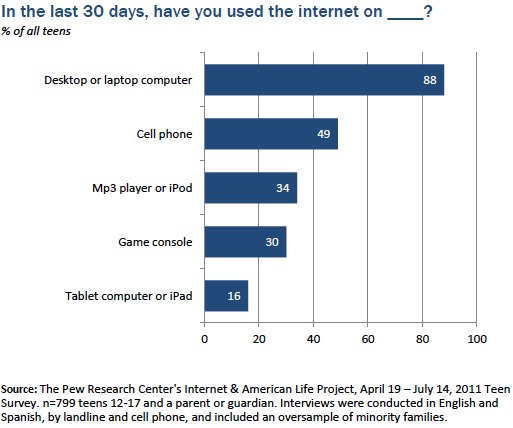 Smartphone owners are also a hair less likely than teens with other types of cell phones to have used the internet on a desktop computer in the last 30 days, with 93% of regular phone owners using a desktop or laptop, along with 85% of smartphone-owning teens.

There are no differences by phone ownership in internet use on a game console or on an mp3 player. 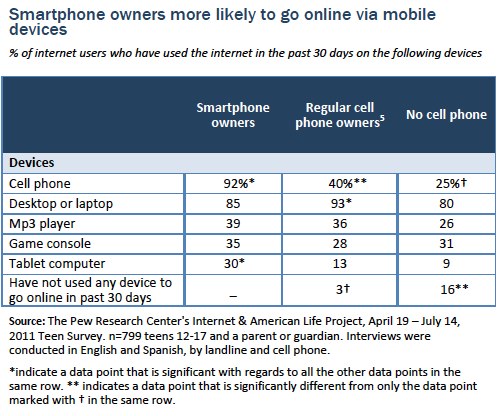 Parents of teen smartphone owners are no more or less likely than other parents to use parental controls to manage their child’s mobile use and mobile internet use.

Next: What teens do with their phones
← Prev Page
Page1Page2Page3You are reading page4Page5Page6Page7
Next Page →