What do teens do with their phones?

Fully 63% of all teens say they exchange text messages every day with people in their lives. Just 1% of teens say they text less than once a week, and 26% of respondents (including those without cell phones) said they do not text with other people at all.

When specifically asked about texting with friends, 49% of teens send and receive text messages with friends every day – while 28% of all teens say they never text friends. 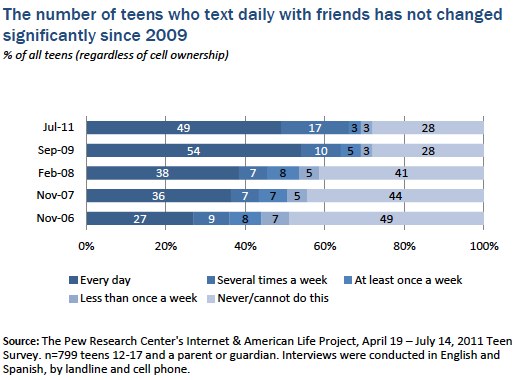 The typical American teen is sending and receiving a greater number of texts than they were in 2009; and teens who text the largest number of messages are texting even more messages on a typical day than they did two years ago. 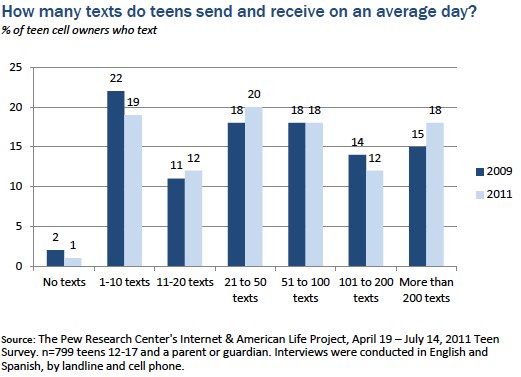 The median number of texts (i.e. the midpoint user in our sample) sent on a typical day by teens ages 12-17 rose from 50 in 2009 to 60 in 2011. Much of this increase occurred among older teens 14-17, who went from a median of 60 texts a day to a median of 100 two years later. Boys also had a slightly larger increase in the median number of texts sent or received each day moving from 30 texts to 50 texts on a typical day. Older girls remain the most enthusiastic texters, with a median of 100 texts a day in 2011, compared with 50 for boys the same age.

And while we see no growth in the median number of texts among white youth (flat at 50), black teens saw substantial increases, moving from a median of 60 to a median of 80 texts a day. Hispanic youth also send and receive very large numbers of texts with a median of 100 texts sent and received each day.6 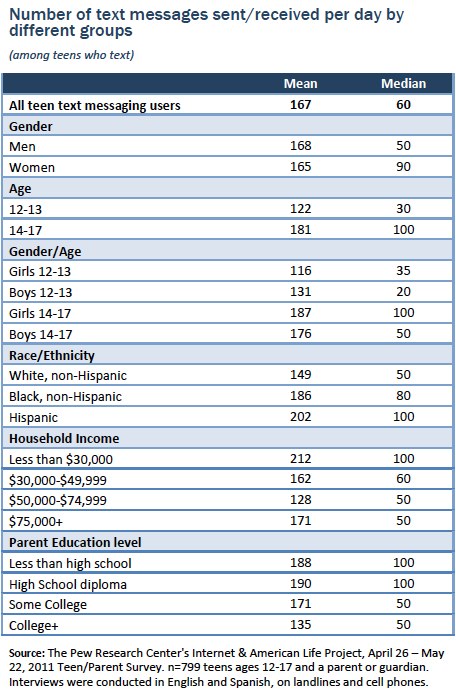 Heavy and medium texters are also more likely than light texters to use an online social network site. Nine in ten (92% of heavy and 89% of medium) of these texters use these sites, compared with 68% of light texters.

Teens who text more than 20 texts a day are more likely to own a smartphone.

Among texting teens who do not own a computer, heavy texters are the least likely to have any computer access at home.

Overall, teens who text have relatively equal access to computers – approximately three quarters of each group says they own a desktop or laptop computer. But when digging into the 26% of teens who say they do not own a desktop or laptop – a far greater percentage of the heavy texters in this non-owning group report that they do not have any access to any computer at home, even one owned by someone else in the household. Nearly half of the heavy texters in this computerless group do not have computer access at home at all, while just a bit more than one-fifth of medium and light texters who do not personally own a computer say they lack home computer access.

While teens still place calls, their frequency of calling friends is declining

Nearly 2 in 5 (39%) of all teens talk to people they know on a cell phone every day, though 25% of teens say they cannot or do not ever talk on a cell phone. Landlines do not show the same kind of all-purpose utility, however – just under 1 in 5 (19%) of teens say they talk to people daily on a landline phone – while a similar 20% say they never talk to someone on a landline (or cannot do so). 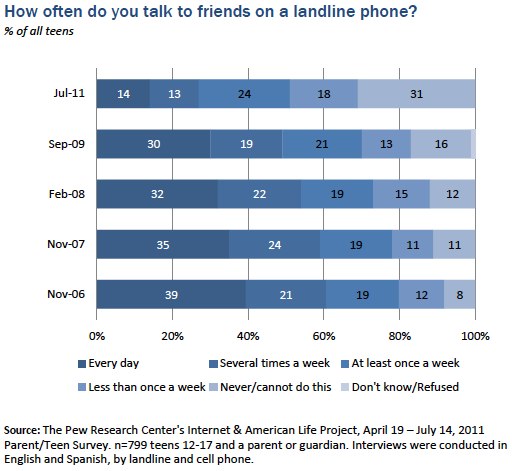 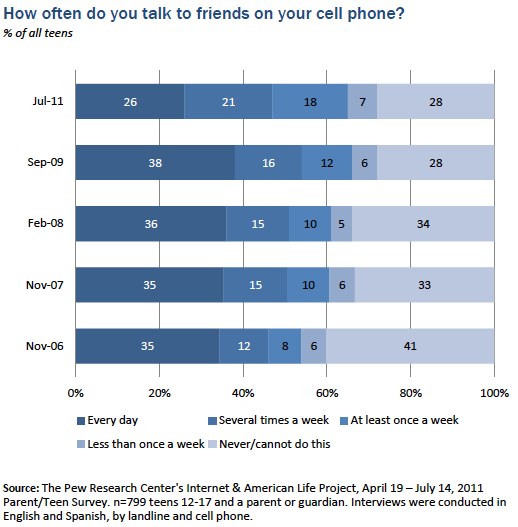 Around 1 in 20 teens use location-based services 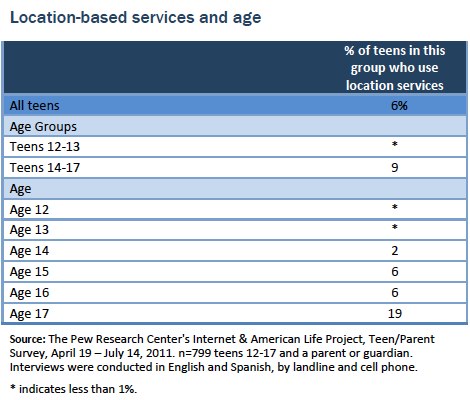 There are no statistically significant differences in use of location-based services by gender, race, household income, or parent’s education level.  There also appears to be a relationship between sharing one’s location and sharing other information with others. Teens who use location-based services are also more likely to have ever shared a password with a friend or significant other than teens who do not use the services (11% vs. 4%).

Teens, Smartphones & Texting
Teens and Mobile Phones
Teens and Mobile Phones Over the Past Five Years: Pew Internet Looks Back
Writing, Technology and Teens
The Trump-Biden presidential contest
White Christians continue to favor Trump over Biden, but support has slipped
An examination of the 2016 electorate, based on validated voters
The Changing Racial and Ethnic Composition of the U.S. Electorate
How Trump compares with other recent presidents in appointing federal judges