46% of American adults now own a smartphone of some kind, up from 35% in May 2011; Smartphone owners now outnumber users of more basic phones

Taken together, just over half of cell owners (53%) said yes to one or both of these questions and are classified as smartphone owners. Since 88% of US adults are now cell phone owners, that means that a total of 46% of all American adults are smartphone users. Two in five adults (41%) own a cell phone that is not a smartphone, meaning that smartphone owners are now more prevalent within the overall population than owners of more basic mobile phones. 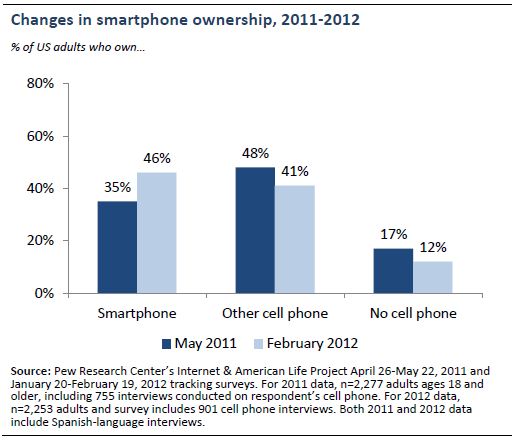 As smartphone ownership has grown over the last year, there has been a corresponding shift in the specific types of phones that Americans report owning:

The proportion of cell owners describing their phone as a Windows (2%) or Palm (1%) device is unchanged since the last time we asked this question in May 2011.

Smartphone ownership has increased across a wide range of demographic groups

Nearly every major demographic group—men and women, younger and middle-aged adults, urban and rural residents, the wealthy and the less well-off—experienced a notable uptick in smartphone penetration over the last year, and overall adoption levels are at 60% or more within several cohorts, such as college graduates, 18-35 year olds and those with an annual household income of $75,000 or more.

Although this overall increase in smartphone ownership is relatively wide-spread, several groups saw modest or non-existent growth in the last year. Chief among these are seniors, as just 13% of those ages 65 and older now own a smartphone. This is far below the national average of 46%, and is largely unchanged from the 11% of seniors who were classified as smartphone owners in 2011. Similarly, smartphone adoption among those without a high school diploma grew by a relatively modest seven percentage points over the last year, and overall adoption rates for this group continue to be roughly half of the national average (25% of those without a high school diploma currently are smartphone owners). 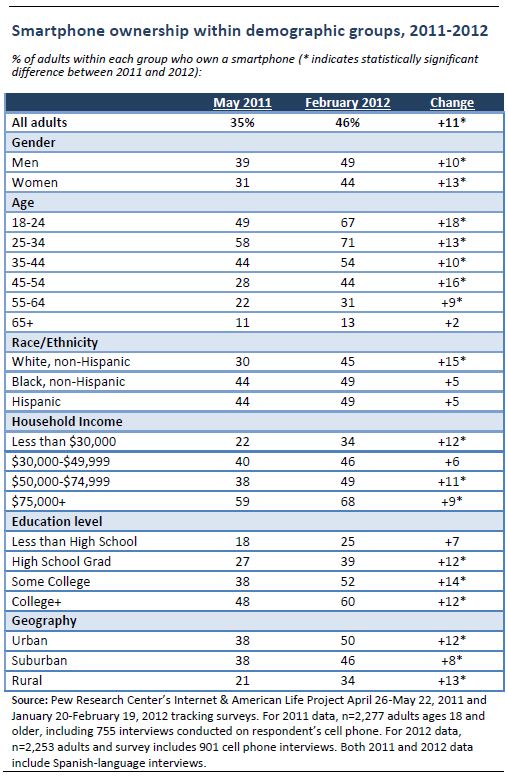 Similarly, smartphone ownership decreases dramatically with age even among adults with similar levels of education. However, younger adults with a high school diploma or less are significantly more likely to own a smartphone than even those seniors who have attended college. 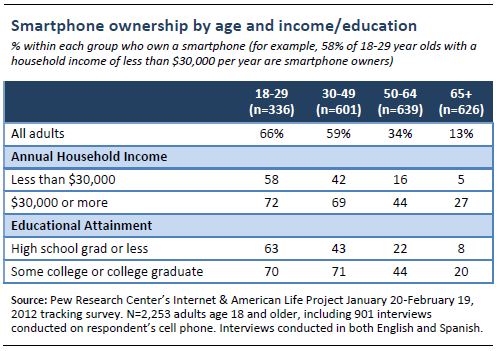 Confusion over the term “smartphone” has declined in the last year