On January 12, 2010 a magnitude 7.0 earthquake struck the nation of Haiti near the capital of Port-au-Prince. Up to three million people were killed, injured or displaced. The story was the most heavily covered news event in the two weeks after its occurrence and was the dominant topic in social media conversations at the time.1 It became one of the most-followed news stories of the year in the United States2 and led to a massive assistance effort on the part of charities, NGOs, government organizations and individuals.

At the individual level, one of the more notable aspects of the response was the widespread use of the text messaging feature on mobile phones to contribute to the disaster recovery efforts. Those donations were encouraged by the U.S. State Department and allowed cell phone users to make an automatic contribution of $10 to the recovery efforts by using the text messaging function on their cell phones (for example, users could text the word “HAITI” to the short code 90999 to contribute to the Red Cross). In the months following the earthquake, Americans contributed more than $43 million via this program.3

In an effort to understand these mobile givers the Pew Research Center’s Internet & American Life Project, in partnership with Harvard University’s Berkman Center for Internet and Society and the mGive Foundation, and supported by the John S. and James L. Knight Foundation, conducted a survey of individuals who sent a contribution to Haiti earthquake relief using the text messaging feature on their mobile phones. The survey was aimed at exploring who these mobile givers are, the technologies they own, their involvement with charitable organizations and causes, what other types of mobile contributions they have undertaken,  and how they perceive mobile giving in comparison to other types of charitable contributions.

Information about this survey and our sample of Haiti text donors

This survey began with a total of 565,211 phone numbers that were provided by the mGive Foundation for the purpose of this study. (mGive provides back end technology that allows organizations to raise money via text messaging). Each phone number was used to make a text message contribution to Haiti earthquake relief, and each donor in our sample agreed to an opt-in statement at the time of his or her donation consenting to receive further contacts or communications at that number. Those who opted out of such communications at the time of their donation were not eligible for this study. Since approximately 4.3 million contributions were made via text message to the Haiti recovery efforts,4 the group from which our sample was drawn constitutes roughly 13% of all such contributions. For more information on how these numbers were obtained, see the Methodology section at the end of this report.

Between September 19 and October 13, 2011 a total of 1,003 surveys were completed using this initial sample of 565,211 phone numbers. In order to participate, respondents were required to be 18 years of age and older, and to have owned their current phone number since at least January 2010.5 Of these 1,003 completed interviews, 137 respondents indicated that they did not remember making a text donation to Haiti relief.6 These non-donors were removed from the final analysis, leaving a total of 863 cases in which the respondent indicated that he or she had indeed made a contribution to Haiti earthquake relief using the text messaging feature on their cell phone.

There is a larger context for this analysis. Pew Internet’s representative surveys of the entire population show that 84% of all adults have cell phones as of August 2011, and that 76% of these cell owners are texters. In June 2010 and January 2012, we asked about text donations in general population surveys and found in each instance that 9% of all US adults had made a charitable donation via text message. When this sample of Haiti text donors is compared to the national population sample of those who had texted a donation to any cause based on these two surveys, we see the following:

The age and income distribution of this sample is generally similar to the overall population of text givers. 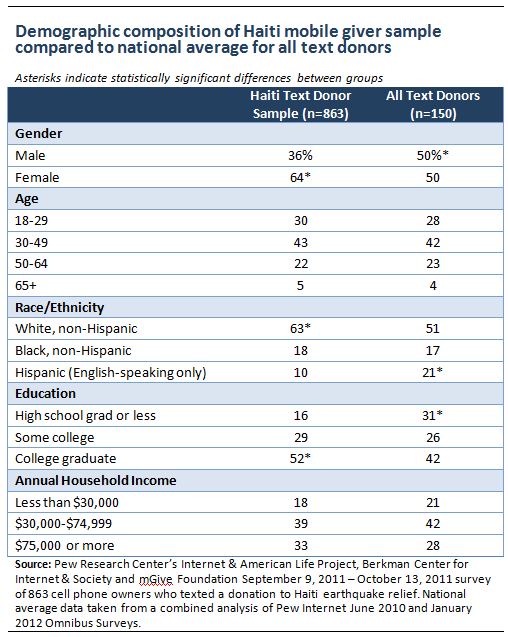 Next: Haiti text donors and their experiences giving to earthquake relief
← Prev Page
Page1Page2You are reading page3Page4Page5Page6
Next Page →

Real Time Charitable Giving
Americans under age 40 are as likely to donate to Japan disaster relief through electronic means as traditional means
The Internet and Campaign 2010
No Longer in the News, Earthquake Survivors Face a Painful Recovery
China’s Earthquake on TV and on the Internet
What the 2020 electorate looks like by party, race and ethnicity, age, education and religion
Election night marks the end of one phase of campaign 2020 – and the start of another
The Changing Racial and Ethnic Composition of the U.S. Electorate
The Trump-Biden presidential contest
How Trump compares with other recent presidents in appointing federal judges