Most of the Haiti text donors we surveyed were introduced to text giving by the Haiti disaster—three quarters (74%) say that their donation to Haiti earthquake relief was the first time they had used their phone’s text messaging function to make a donation to an event, cause or organization. One in five (22%) had texted a donation of some kind prior to their contribution to Haiti earthquake relief, and 5% are not sure whether they had done so before. Young adults and lower income respondents were a bit more likely than average to say that this was the first time they had made a text message contribution.

Overall, two-thirds of Haiti text donors in our survey (67%) made a single text message donation to earthquake relief. An additional 23% donated to the cause twice using their cell phone, and one in ten (9%) did so three or more times. African American and Latino text donors are more likely than white donors to have made multiple contributions using their mobile phones (41% of black and 40% of Latino text donors did so, compared with 28% of whites). Otherwise most of the donors we surveyed made a similar number of contributions using their mobile phone. Notably, first-time donors in the Haiti group were no more or less likely to make multiple contributions than those who had texted a donation to a cause previously.

Along with being mostly first-time text donors, a sizeable majority of mobile givers in our survey contributed to earthquake relief using only their cell phone. Eight in ten (80%) did not donate to Haiti relief in any other way, while one in five (19%)—in addition to their text contribution—donated some other way such as online, in person, or via regular mail. Combining those who made multiple donations using their cell phone and those who made a text donation plus some other kind of contribution, a total of 42% of the Haiti text donors surveyed made more than one contribution to Haiti earthquake relief.

A majority of Haiti text donors surveyed (56%) contributed to other disaster recovery efforts using the text messaging feature on their cell phones following their donation to Haiti earthquake relief. This includes those who:

Haiti text donors who went on to text contributions to other events are not demographically distinct from those who did not. However, those individuals who made multiple contributions to Haiti relief, or who had texted a contribution to another cause prior to the Haiti campaign, were more likely to contribute via text message to later disaster relief efforts. 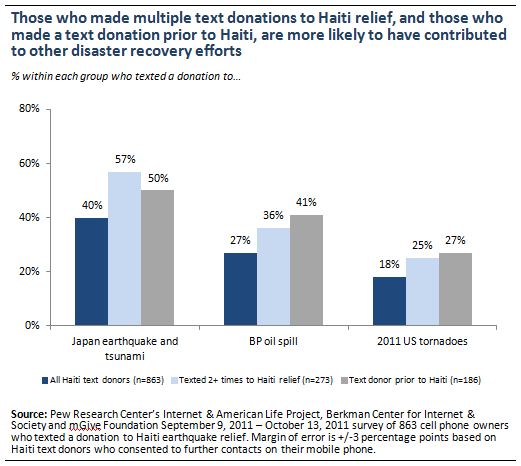 In addition to the specific disaster recovery efforts asked about in the survey, 29% of these Haiti text donors volunteered that they had texted a donation to some other organization or cause besides those listed above. Some of the more common responses included:

When asked how long they waited between first hearing about the text donation campaign for Haiti and actually donating, half of the Haiti mobile donors surveyed (50%) say that they donated immediately upon hearing about the effort. An additional 23% did not donate immediately, but did do so within a day—meaning that three-quarters of these donors made a contribution on the same day they first heard about the campaign. One in five (20%) waited between one day and one week before making a contribution, while a small number (5%) waited a week or more to donate. 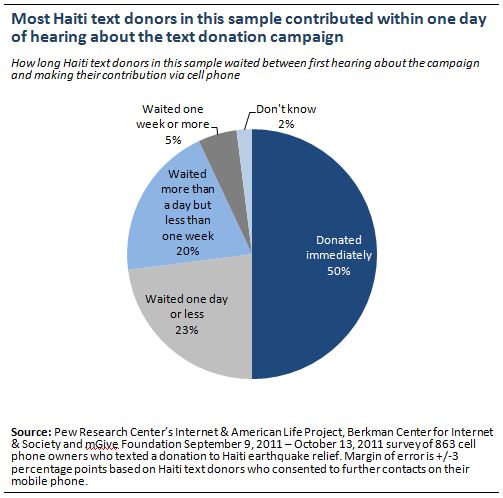 Even for those individuals who waited for a period of time before donating, their decision to donate was generally not the product of additional in-depth research. Those donors who did not contribute immediately, were asked whether they did any additional research about the organization they were donating to or how their money would be spent—and 70% said that they did not do this research. Thirty percent (30%) of those who waited to donate say that they did conduct additional research. But since half of all Haiti text donors surveyed contributed immediately, that means that just 14% of all donors in our sample researched where their money would be going before texting their contribution.

This tendency towards “impulse giving” via text message extends not just to their contribution to Haiti relief, but to their views of mobile giving more generally. In our survey we asked these donors whether their online and text message contributions to various organizations are usually a spur-of-the-moment decision, or whether they usually do a lot of research before making their contribution. For online donations, responses were split evenly—45% say that these contributions are usually spur-of-the-moment, while 50% say that they tend to research their decision beforehand. For text donations on the other hand, quick decisions are the norm—fully 76% say that these contributions usually involve minimal research. 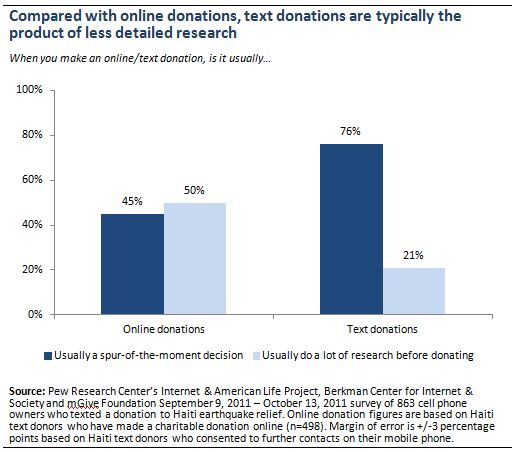 Information about how to text a donation to the Haiti relief efforts appeared in numerous venues, but television is overwhelmingly the main place that these donors recall seeing this information. When asked where they remember seeing information about the campaign, nine in ten (89%) mention television—by comparison, just 4% mention the internet, 3% mention an online news story or blog post, and 2% each mention the radio, text messages or posts on social networking sites.

Just under half (43%) of the Haiti text donors surveyed indicate that they encouraged friends or family members to make a similar contribution using their mobile phones (56% did not do this). Demographically, young adult and non-white donors were more likely than others to encourage friends or family members to make a text donation—just over half of black (53%), Latino (55%) and 18-29 year old (54%) text donors in this sample did so. 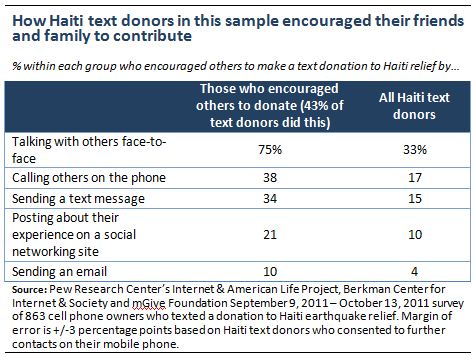 After making their contribution to earthquake relief, relatively few Haiti text donors in this sample have continued to monitor the ongoing reconstruction efforts. Just 3% of these donors have been following post-earthquake events “very closely”, while a total of six in ten say that they have been following these events either “not too closely” (43%) or “not at all” (15%). 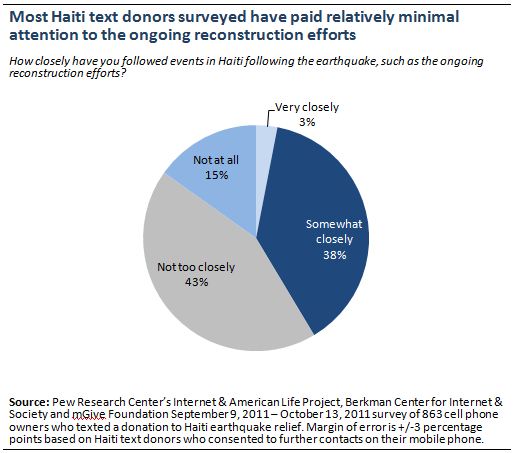 Next: Profile of the Haiti text donors in this sample
← Prev Page
Page1Page2Page3You are reading page4Page5Page6
Next Page →