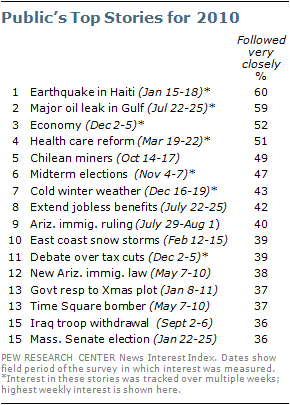 Two major disasters – the earthquake in Haiti and the oil leak in the Gulf of Mexico – captured the public’s attention more than any other major stories in 2010, but Americans also kept a consistent eye on the nation’s struggling economy.

Throughout the year, the economy – the top story in both 2009 and 2008 – was never far from the top of the public’s news interest. That is especially true for the second half of the year amid indications the recovery had stalled. In early December, for example, 52% said they were following news about the economy very closely. That was the highest level since mid-summer, though relatively high percentages said they very closely followed news about the economy– or related issues such as an extension of jobless benefits – all year.

According to the weekly News Interest Index survey, the public also closely tracked news about the long-running debate over health care legislation in Washington. Interest peaked at 51% following very closely in mid-March as the House passed the legislation and sent it to President Obama for his signature. And in January, a special election for a Senate seat in Massachusetts attracted unusually high interest because of its implications for the health care bill. More than a third (36%) paid very close attention to Republican Scott Brown’s victory, which dealt a temporary setback to supporters of health care legislation.

The dramatic rescue of the Chilean miners from a collapsed mine in October drew substantial public interest (49% very closely). That rare good news story attracted much more attention than the April mine accident in West Virginia that left 29 dead. A third of the public (33%) followed that story very closely.

Interest in the midterm campaign increased as elections approached. And after the elections in which the GOP won control of the House and made gains in the Senate, nearly half the public (47%) said they very closely followed news about the results of the midterms. That was comparable to interest in the Democrats’ sweeping victory in the midterm four years earlier (46%).

The Jan. 12 earthquake in Haiti and its aftermath dominated the public’s news interests through January and the first half of February. The health care debate was the top story even after the legislation was passed by Congress and signed by the president in March. But the economy frequently ranked as the second or third most closely followed story – and more often number one in the year’s final months.

Perceptions of the tone of economic news took a turn for the worse mid-year, as more news stories stressed signs that the recovery had stalled. Most notably, unemployment remained stubbornly high and the housing markets remained weak.

The April 20 explosion of an offshore oil rig near the coast of Louisiana attracted only modest interest from the public. But the explosion caused a massive oil spill in the Gulf of Mexico, which led the public’s news interests starting in early May and continuing until nearly the end of August.

Throughout the year, other stories jumped to the top of the public’s news interest. The public was riveted by the dramatic rescue of Chilean miners in October. Interest in that story far surpassed not only interest in the economy but also interestin the midterm elections, which were then just two weeks away.

In late August, the public closely tracked the debate over whether a Muslim mosque should be built near the site of the former World Trade Center towers in New York City. That week, 19% said they followed the debate about the proposed Islamic cultural center and mosque most closely, though about as many (16%) cited news about an ongoing egg recall as their top story.

As Nov. 2 approached, the elections more frequently topped the public’s news agenda. And as the year entered its final weeks, the public focused most closely on both the economy and the debate in Washington over whether to extend the Bush-era tax cuts.

In the News Interest Index survey conducted Dec. 16-19, Americans say the two stories they followed most closely last week were the final approval of major tax legislation in Washington and the cold winter weather that struck many parts of the country.

About four-in-ten (39%) say they paid very close attention to news about the economy; 14% say they followed economic news more closely than any other topic.

The media also focused on the economy and the tax legislation last week. The finale of the debate over tax cuts made up 17% of the newshole, according to the Pew Research Center’s Project for Excellence in Journalism. More general economic news accounted for an additional 9% of coverage. News about harsh winter weather conditions made up 3% of the newshole. 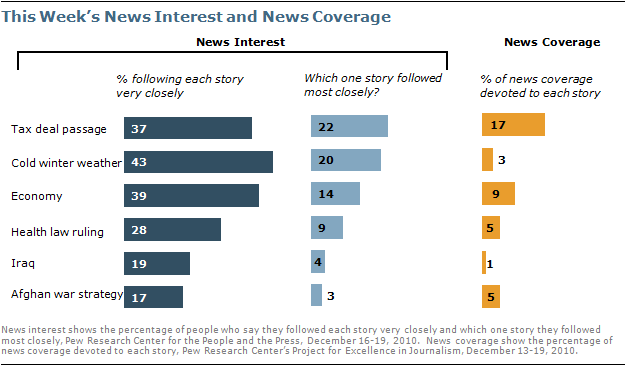 Nearly three-in-ten (28%) say they very closely followed reports about a federal judge in Virginia ruling that parts of the new health care law are unconstitutional, including a provision mandating all Americans carry health insurance. About one-in-ten (9%) say this was the news they followed most closely. Far more Republicans (42%) than Democrats or independents (24% each) followed this story very closely.

These findings are based on the most recent installment of the weekly News Interest Index, an ongoing project of the Pew Research Center for the People & the P
ress. The index, building on the Center’s longstanding research into public attentiveness to major news stories, examines news interest as it relates to the news media’s coverage. The weekly survey is conducted in conjunction with The Project for Excellence in Journalism’s News Coverage Index, which monitors the news reported by major newspaper, television, radio and online news outlets on an ongoing basis. In the most recent week, data relating to news coverage were collected December 13-19, and survey data measuring public interest in the top news stories of the week were collected December 16-19, from a nationally representative sample of 1,034 adults.

Results for the weekly surveys are based on telephone interviews conducted under the direction of Princeton Survey Research Associates International among a national sample of approximately 1,000 adults living in the continental United States, 18 years of age or older. For results based on the total sample, one can say with 95% confidence that the error attributable to sampling is plus or minus 4 percentage points. Results for the latest survey, conducted December 16-19, 2010, are based on a national sample of 1,034 adults (703 respondents were interviewed on a landline telephone, and 331 were interviewed on a cell phone, including 152 who had no landline telephone). Both the landline and cell phone samples were provided by Survey Sampling International. Interviews were conducted in English.