The growing apps culture is a reflection of a broader trend in which mobile devices have become standard pathways to connect to the internet.  Over the past decade, desktop computers—once the mainstay of internet use in the U.S.—have steadily decreased in popularity.  At the same time, the use of mobile devices to connect to the internet has grown steadily, particularly among young adults.  In February of 2010, Pew Internet reported for the first time that laptops had overtaken desktops in popularity among 18-29 year-olds.

While this mobile charge was led by the shift from desktop to laptop computers, it has come of age with smartphones and now tablet computers.  In May 2011, Pew data showed that 35% of adults in the U.S. owned smartphones. 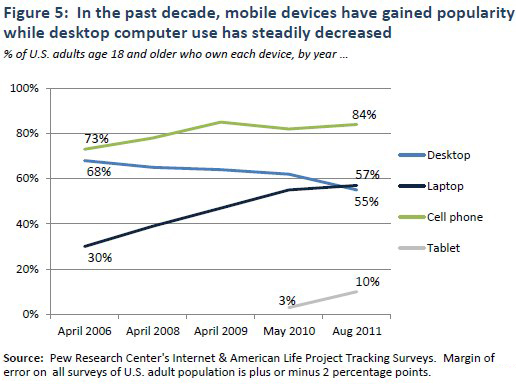 Apps downloading in the context of popular mobile activities

While apps downloading on mobile devices is growing, it is lower than might be expected given the high percentage of cell phone owners using their phones for various activities and tasks.  Many of these activities actually require “apps,” which may come preloaded on the phone.  Still, given how many cell owners use their phones to access the internet, send and receive email, play games, listen to music, etc., one might expect the percent who download apps to be higher than it is. 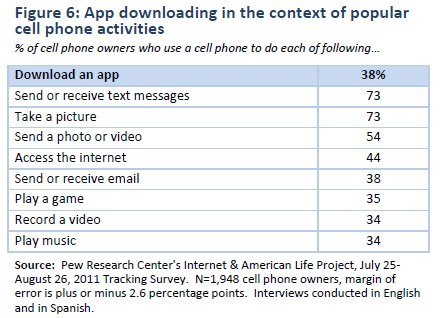 Next: Part III. Do people use the apps they download?
← Prev Page
Page1You are reading page2Page3Page4Page5Page6
Next Page →

Half of adult cell phone owners have apps on their phones
Part II. Apps are only part of Americans’ preference for mobile devices
IntroductionApps downloading in the context of popular mobile activities
Part III. Do people use the apps they download? Part IV. What types of apps are adults downloading? Part V. Paying for apps Methodology