Apps serve many functions, from communication to information gathering, productivity and entertainment. The current survey asked app downloaders if they had ever downloaded apps for any of nine different purposes. Overall, apps that provide regular updates about everyday information (news, weather, sports, or stocks) and those that help people communicate are the most commonly downloaded. 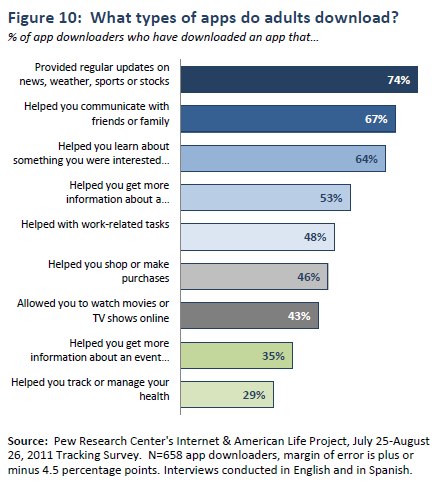 Demographic patterns emerge in downloads of different types of apps

The type of apps an adult downloads is correlated with a variety of demographic factors, including age, race/ethnicity, gender, education and income.  Figure 11 shows which demographic groups are most likely to download each of the nine types of apps asked about.  Overall… 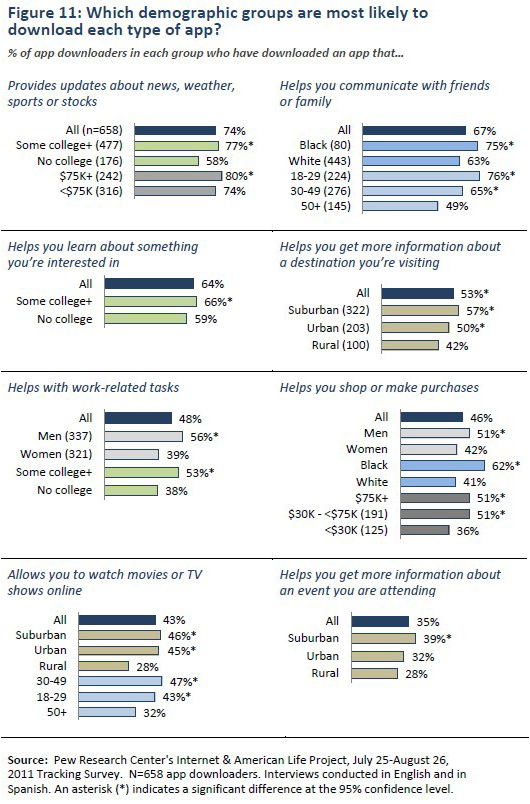 Health apps are of particular interest to those in the public health and epidemiology arenas, and Pew Internet has been measuring use of these apps for more than a year.  In September 2010, data showed that 9% of all adult cell users had an app that “helped them track or manage their health.” This captures a wide range of software applications, from those that count calories and help manage an exercise routine, to more advanced apps that monitor vital signs and help individuals manage serious health conditions. 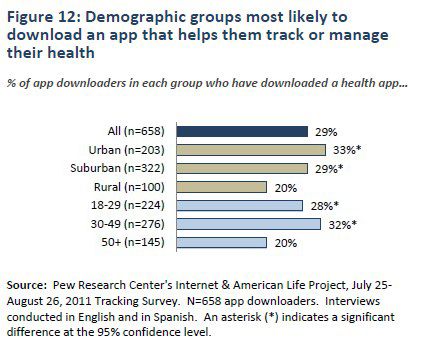 In August 2011, the question was asked of adults who have downloaded an app to a cell phone or tablet computer, rather than all cell phone users.  More than a quarter of this population (29%) report downloading a health app.  Looking just at adults who download apps to a cell phone, this translates to 11% of all adult cell phone users having downloaded an app that helps them manage their health, a statistically insignificant difference from the 9% of adult cell users who reported having a mobile health app in September 2010.

2011 results are also similar in the sense that adults living in urban areas are most likely to report downloading an app that helps them track or manage their health.  And again, younger adults are more likely than older adults to download this type of app; however, in the current survey, 30-49 year-olds are as likely as 18-29 year-olds to download a health app.  It is only adults age 50 and older who lag behind.  Also, in August 2011, there are no significant differences across racial/ethnic groups where downloading health apps is concerned.

Nielsen’s research shows games are the most widely used apps

It is helpful to put the current survey findings about the types of apps adults download in broader context.  According to Nielsen’s quarterly Mobile Insights Survey, games continue to be the most popular apps in terms of use in the 30 days prior to the survey. In the second quarter of 2011, Nielsen reported that 64% of app downloaders in their survey had used a game app in the prior 30 days.  Next most widely used were weather apps (60%), followed by social networking (56%), maps/navigation/search (51%), music (44%) and news (39%).  Less widely used by their sample were health apps, used by just 13% of downloaders in the month prior to the survey, and education apps (11%).

Half of adult cell phone owners have apps on their phones Part II. Apps are only part of Americans’ preference for mobile devices Part III. Do people use the apps they download?
Part IV. What types of apps are adults downloading?
IntroductionDemographic patterns emerge in downloads of different types of appsHealth appsNielsen’s research shows games are the most widely used apps
Part V. Paying for apps Methodology