As Figure 13 shows, 46% of adults who download apps report having paid for one at some point, which is statistically equivalent to the 47% who reported doing so in May 2010.  However, since the app downloading population as a whole has grown, that means that 16% of all U.S. adults have ever paid for an app, compared with 13% in May 2010.  This is a small but statistically significant increase.

As a percentage of all app downloaders (Figure 13), roughly one quarter say the highest dollar amount they have ever paid is $5 or less, and 8% have paid more than $20 for an app.  Figure 13 also shows that adults who download apps to a tablet are more likely to pay for apps, and also tend to pay more for their most expensive apps than those who download apps to cell phones. 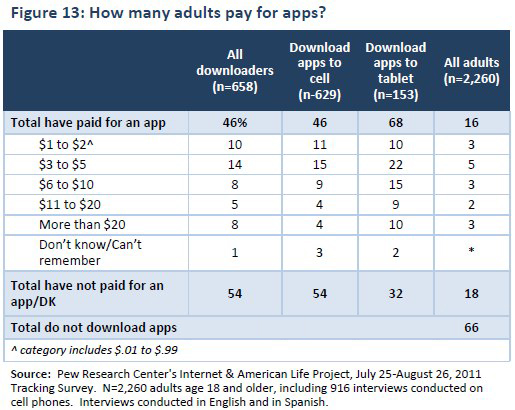 Some demographic groups are more likely to pay for apps

Among app downloaders, the demographic groups most likely to pay for apps are men, adults age 30 and older, college graduates, adults with household incomes of $50,000 or more, and those living in urban communities. 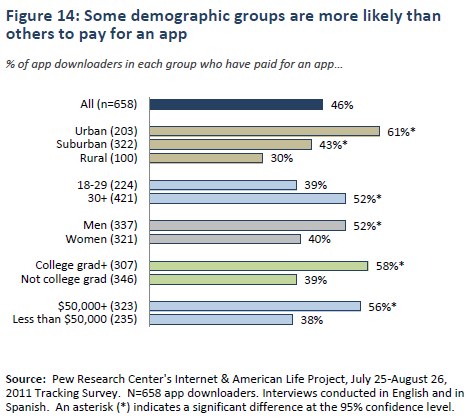 Half of adult cell phone owners have apps on their phones Part II. Apps are only part of Americans’ preference for mobile devices Part III. Do people use the apps they download? Part IV. What types of apps are adults downloading?
Part V. Paying for apps
IntroductionSome demographic groups are more likely to pay for apps
Methodology