Among adults who have apps on their cell phone, roughly half of this group (51%) use a handful of apps at least once a week while 17% report using no apps on a regular basis.  Almost a third (31%) could be called app “power users” in that they use 6 or more apps on a weekly basis.  Among adults who have a tablet computer, 39% report using 6 or more apps on a weekly basis, while just 8% report using no apps regularly on the device. Differences between the groups are not statistically significant, given the small sample size (and large margin of error) for tablet owners. 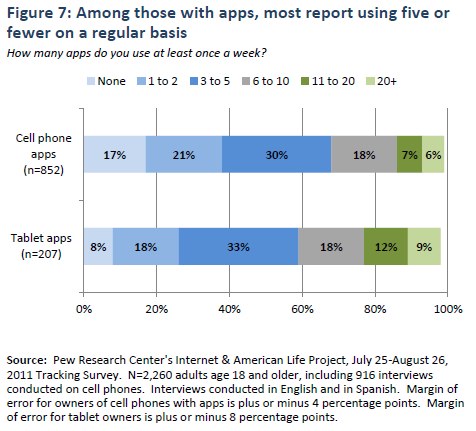 When these figures are computed as a percentage of all adults, apps use is put in clearer perspective.  Figure 8 shows the percent of all adults who use apps on a cell phone or tablet computer on a regular basis.  Among all U.S. adults, only one in three (35%) report using any apps on their cell phone on a regular, weekly basis.  And just one in ten adults (9%) report using apps on a tablet computer at least once a week. 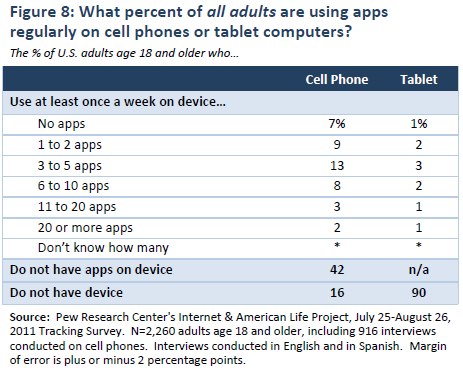 Young adults use more apps on a regular basis

Not only are younger adults more likely to download apps, they are also more intense users of the apps they have.  In fact, age is the strongest predictor of app use.

This generational impact was also apparent in Pew Internet’s May 2010 survey, in which the youngest adult cell phone users (age 18-29) were 50% more likely than those ages 50 and older to say they used their apps, and had, on average, a greater number of apps on their phones.  At that time, younger adults were also the most frequent app downloaders; while 10% of all adult cell phone users in May 2010 reported downloading an app in the past week, the figure was 20% among cell users under age 30.

In the current survey, younger adults report more regular app use on both cell phones and tablet computers, though the sample size for tablet users is too small to report age breakouts reliably. Figure 9 below shows how the frequency of cell phone app use breaks down by age. 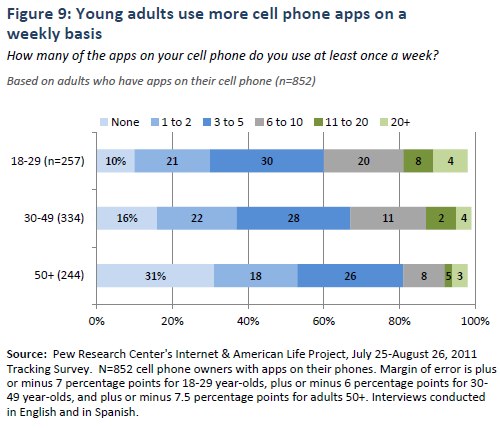 Next: Part IV. What types of apps are adults downloading?
← Prev Page
Page1Page2You are reading page3Page4Page5Page6
Next Page →

Half of adult cell phone owners have apps on their phones Part II. Apps are only part of Americans’ preference for mobile devices
Part III. Do people use the apps they download?
IntroductionYoung adults use more apps on a regular basis
Part IV. What types of apps are adults downloading? Part V. Paying for apps Methodology